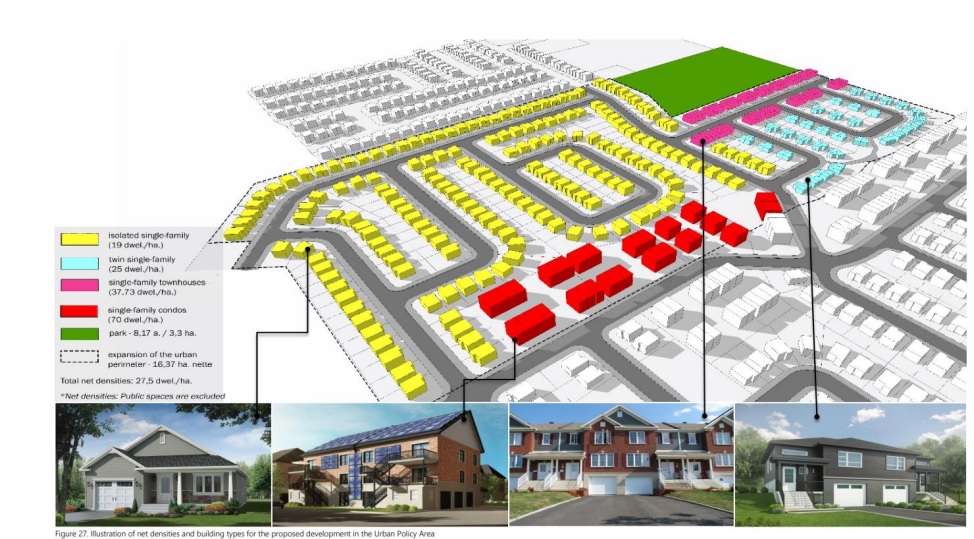 Illustration of the layout and homes in the proposed 358-home new subdivision in Limoges. UCPR illustration

The building boom continues in Limoges.

According to La Nation Mayor François St-Amour, two new subdivisions of approximately 300 dwellings each have been approved for the community during the past year. Now, a third subdivision of approximately 358 units is going through the approval process by the municipality and the United Counties of Prescott and Russell (UCPR).

“We’ve been working on two big ones, there’s also a third in negotiations,” St-Amour confirmed.

The new homes are a combination of townhouses, semi-detached, and single-detached houses.

A public meeting for the latest subdivision proposal was held on September 27. It affects 60 acres of land south of Savage Street at the eastern edge of Limoges and would include an extension of Mayer Street. The proposal includes 172 single detached houses, 120 row townhouses, and 66 semi-detached houses. A park is also proposed for the development. Group Lauzon is the developer proposing the subdivision.

A member of the audience asked if the developer would be required to have an updated traffic study done, due to the potential of increased vehicle traffic from residents of the new subdivision.

St-Amour commented the UCPR had already performed a traffic study for the Limoges Road and Savage Street intersection, with input from La Nation and Russell Township, due to new developments and the sports complex being constructed nearby. A study of the internal traffic needs required within the development has been done, and the UCPR is considering which improvements may be required to adjacent arterial roads, due to all of the developments being planned in the area.

The audience member followed up by asking if anything will be done on Savage Street to calm incoming traffic. La Nation Planner Guylain Laflèche agreed to consider the matter.

There were no questions or comments about the proposed subdivision from council.

Limoges residents – or people planning to move to the community – should not expect all of the proposed subdivisions to instantly appear within the next year. Construction will be a phased, five-to-10-year process because developers do not like to flood the market with vacant houses, St-Amour said.

Limoges has become a popular bedroom community for Ottawa commuters. St-Amour said recent sewage lagoon improvements in the community and the construction of a new watermain to bring water to Limoges from the Clarence-Rockland water system in Cheney will ensure there are adequate municipal services for the growing community.