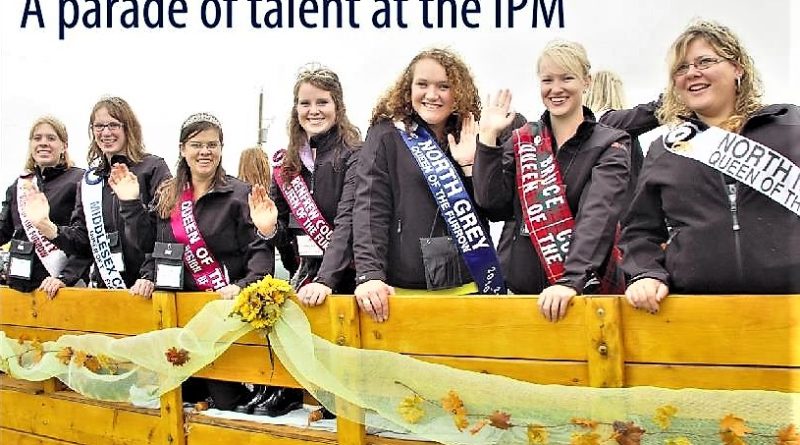 Contestants in the Queen of the Furrow Contest at the 2011 International Plowing Match in East Hawkesbury. Review Archives Photo

10 Years Ago
International Plowing Match begins
The Review, September 21, 2011 – CHUTE-A-BLONDEAU – Three years of planning finally came to fruition as the International Plowing Match kicked off with its opening ceremony. In attendance were Plowmen’s Association Bob Hammell and IPM Chair Gary Barton, as well as the Queen of the Furrow contestants.

25 Years Ago
Turpin Autos takes over Belanger
The Review, September 25, 1996 – HAWKESBURY – One of Hawkesbury’s oldest car dealerships became the victim of a shrinking market with the merger of Belanger Chev-Olds and Turpin Autos. Sales Manager Luc Belanger said the dealership employed some 25 people, about a dozen of whom have been offered work at Turpin.

50 Years Ago
Bruce Mode wins 4-H Club trophy
The Review, September 22, 1971 – VANKLEEK HILL – Twenty members of the Prescott County 4-H Horse Club brought their horses to the first day of the Vankleek Hill Fair to participate in 13 events featuring Western riding and gymkhana. The Club Trophy for the member winning the most points on Achievement Day went to Bruce Mode with 27 points. Diane Mode was second with 19 points, while the other three top winners were Michael Haughton, Barry Mooney and Ricky Nelson.

75 Years Ago
VKH Fair gate receipts top $3,000
The Review, September 26, 1946 – VANKLEEK HILL – There has been no falling off of interest in our 100-year-old exhibition of farm products. The gate receipts for the Vankleek Hill Fair were over $3,000, which is probably a record breaker. Our own opinion is that the exhibits in the ‘Hall’ were better than usual. Last year, for example, there wasn’t a single apple at the exhibition.

100 Years Ago
Hawkesbury’s mayor unseated
The Review, September 23, 1921 – HAWKESBURY – Judge O’Brien rendered his judgement in the now famous case to unseat Mayor Sabourin, of Hawkesbury, the result being that Mr. Sabourin is not only unseated, but the seat is awarded to Dr. F.P. Pattee, who was Mr. Sabourin’s opponent in the last election. Judge O’Brien found that Mr. Sabourin was disqualified at the time of the election due to corrupt practices.

125 Years Ago
Tramps infest village
The Review, September 18, 1896 – VANKLEEK HILL – The army of tramps infesting our village is a serious menace to its peace and quietness. Instead of diminishing in numbers new recruits seem to be arriving daily. Had we a good-sized corporation stone pile it might prove to be a source of wholesome recreation for them and perhaps and incentive to seek new fields.