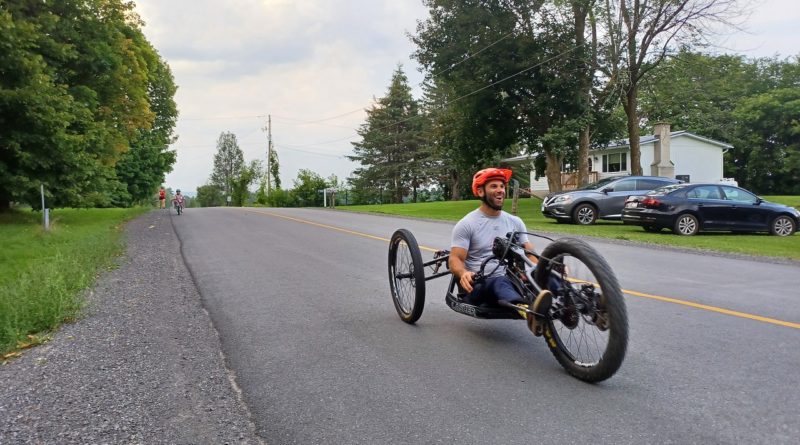 A smiling Joey Desjardins arrives at a send-off celebration held by neighbours and friends on August 17. His daughters Stella and Zayla, and wife Vanessa are following in the background on Bangs Road. Photo: James Morgan

It’s a rare day off from the bike at the Cycling Canada Training Centre in Bromont, Quebec, for Paralympic handcyclist Joey Desjardins, but the Hawkesbury athlete is still working hard, as he prepares to compete in the Tokyo 2020 Summer Paralympics next week.

“Can you hear me OK through this headset?” says Desjardins, as he answers a phone call from The Review for a scheduled interview. “I’m doing some bike mechanic work today, so I’m hands deep in chain grease.”

With the tinkling sound of him working on his handcycle in the background, Desjardins explains that he is taking a day off from the bicycle after five straight days of training. As he prepared to fly to Tokyo on Monday, August 23, Desjardins said he was planning to slow down training over his final few days in Bromont.

“I’m getting a much-needed day off today – my body’s feeling a little tired. For the rest of the week, I’ll start tapering off, reduce the training load and focus on recovery.”

Desjardins will be competing in two events at the Paralympics in the Men’s H3 Handcycling division. On August 30 he races for a medal in the Time Trial, and on September 31 the Hawkesbury athlete will go head-to-head with his fellow competitors in the Men’s H3 Road Race.

For those who want to follow his events at the Games, Joey will compete in the Tokyo Paralympics Men’s H3 Time Trial beginning at 7 p.m. Eastern Daylight Time (EDT) on Monday, August 30. The race will be broadcast live at the Green Beaver outdoor space at 179 Main Street East in Hawkesbury if you want to cheer on Joey with a full group of supporters.
You will have to get up early on Wednesday September 1, if you want to watch Joey race live in the Men’s H3 Road Race, which goes off at 1:20 a.m. EDT (2:20 p.m. in Tokyo). CBC will also be showing the Road Race replay later in the day.

It’s a grueling schedule, but something the competitors are used to, Desjardins says, and he expects to be in great form for both events.

“We do so many training runs back to back that our bodies can handle the two days consecutively. I’ll definitely be a bit more tired for the Road Race, but everybody is in the same boat.”

A long shot to make the Canadian team two years ago, Desjardins showed tremendous improvement over the past year to become one of three Canadians picked to represent Canada in the Men’s H3 category at the 2020 Tokyo games, which were postponed by a year until this summer. The H3 group has the greatest number of entries of any division and is considered the most competitive category in paracycling.

Joining him in the both the H3 Time Trial and Road Race will be veteran Charles Moreau and Alex Hyndman, who will also be competing in his first games. The three are very close – both in ability and as friends – and are pushing each other to their peak abilities as they prepare for the Paralympics.

“We’re so close to each other in terms of speed, fitness and ability, that we’re hoping to maybe pull off a 1-2-3,” Desjardins said, before breaking out into a laugh. “That would be pretty crazy, but I’m dreaming over here.”

As the only country with multiple competitors in the Men’s H3 Handcycling category, Canada’s three-man team will have one distinct advantage in the grueling Road Race, where drafting to increase speed and save energy is a big factor. The three have been working together in practice so they can help each other in the demanding high-speed race.

“For the past couple of months we have have definitely been pushing the drafting aspect,” Desjardins said. “We can work pretty well together and get some pretty crazy speeds going, so it would be fun if we can implement that in the Road Race.”

Wanting to work with each other in the road race is one thing. Actually getting into a position to be able to do so is another, Desjardins noted.

“There are just so many unknowns. The first lap is usually all out – you’re just kind of holding on for dear life. Then it kind of settles down midway and ramps up again before the finish. We’ll see how the competitors play it.”

In the August 31 Men’s H3 Time Trial, each rider is on his own. Racers in the 24-kilometre-long event start one minute apart and compete individually against the clock – unlike in the road race where they can judge their position against the other competitors.

“You really don’t know anything, although the later you start the more you are informed, because you get feedback from the competitors who left before you,” says Desjardins, who expects to start early in the field. “I will have to just go at it and hopefully put in a really good time that the others can’t match.”

As for his expectations for the Tokyo Games, the Hawkesbury athlete says he is in great shape and hopes to achieve personal bests in power output and stamina. His goal remains to win a medal, but whatever the result Desjardins is thrilled to be able to compete with his teammates in Tokyo.

“We’re all aiming for a medal – every athlete is going in hope of a medal,” Desjardins said. “But it is so up in the air with no races in the past two years, that I don’t know what the outcome will be.”

“I don’t have many sore spots to complain about. The power is good and everything’s is going the way I want.”

Efforts are being organized to broadcast Desjardins’ races on a large screen at the Espace Green Beaver pop-up park in downtown Hawkesbury, to enable a hometown crowd to watch together outdoors. Organizer Suzanne Hocquard said more details will be available once television schedules are known. 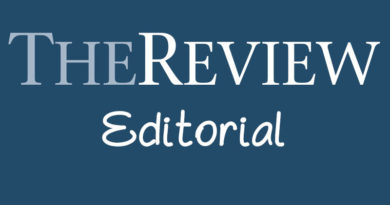 Whose job is job creation? Is it up to our government?