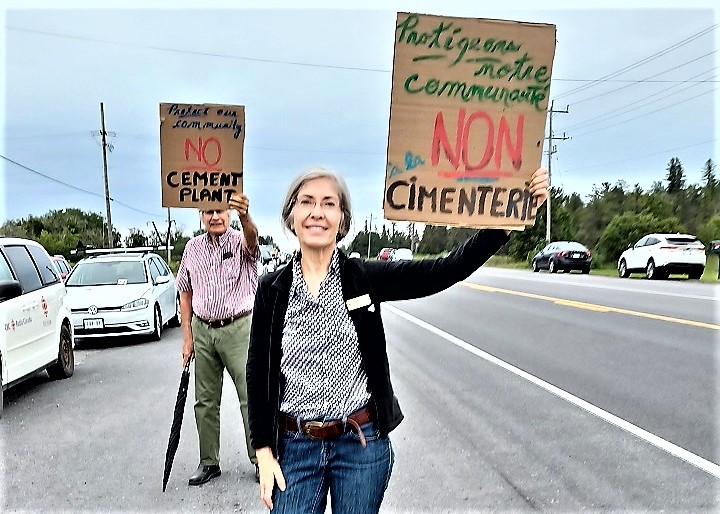 Champlain Township Councillor Violaine Titley holding a sign by Highway 17 at a protest against the cement plant on August 17. Her husband Robert March is in the background. Photo: James Morgan

Champlain Township council has unanimously approved a resolution explaining the greenhouse gas emissions concerns about the proposed Colacem cement plant and opposing the weighted voting system, which in 2017 resulted in a 19-7 vote by United Counties of Prescott and Russell (UCPR) council in favour of the Official Plan Amendment required to construct the plant.

At that vote, the mayors of Clarence-Rockland, La Nation, Casselman, and Russell Township voted in favour of the amendment. Votes on UCPR council are allocated based on population.

The resolution, introduced by Councillor Violaine Titley’s at council’s regular meeting on August 12, requests that the township send a letter to Ontario Minister of the Environment, Conservation, and Parks David Piccini, with an invitation to visit the plant site.

“This project has seen 10 years of opposition from the public,” said Titley at the council meeting. “It has put huge stress on the lives of the local residents.”

She said erroneous data was used in the approval process and called the UCPR council weighted vote system “undemocratic.”

Councillor Andre Roy seconded Titley’s resolution and said it is an opportunity to tell all politicians that the community is against polluting the environment.

“That’s all this company is going to do,” Roy commented.

As for the employment the cement plant could bring to the region, Roy said there are already many local positions available in other industries.

“Let’s fill the jobs we do have right now before filling more jobs with such a polluting industry.”

At the August 11 Committee of the Whole meeting, UCPR council received a request from Action Champlain to waive its requirement to pay $5,000 in legal fees to the UCPR. The costs were accrued by the UCPR when Action Champlain unsuccessfully attempted to appeal the LPAT decision upholding the Official Plan Amendment (OPA) in Divisional Court. Champlain Township Mayor Normand Riopel proposed UCPR council vote on the request at the regular council meeting on August 25.

The majority of mayors agreed to proceed with the vote at that time except for La Nation Mayor Francois St-Amour. The letter containing the request from Action Champlain states 93 per cent of residents opposed the OPA during the public consultation process conducted by the UCPR in 2017, but the number and residency of those people is not specified in the letter.

“How many people is that?” St-Amour asked, adding, “How many of those people come from La Nation?”

St-Amour said he will not support granting Action Champlain’s request and the organization should be prepared to accept responsibility for the outcome of its efforts.