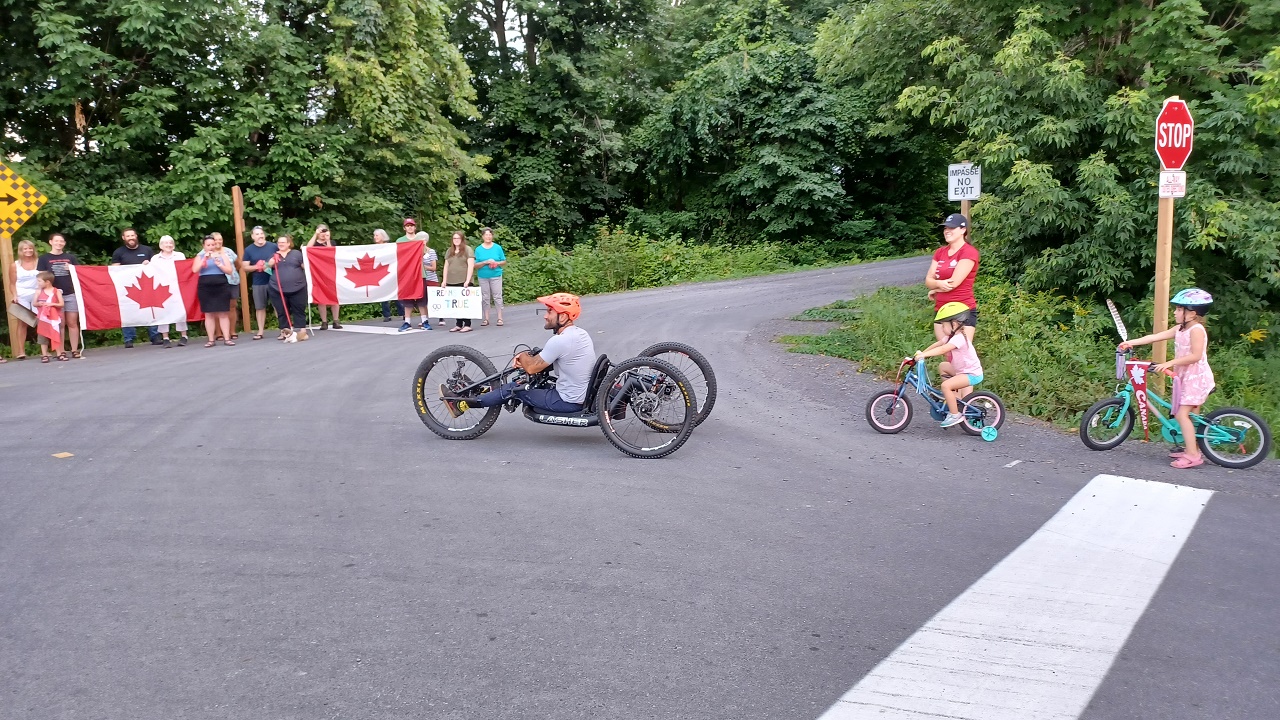 Joey Desjardins visits with the crowd gathered at the corner of Bangs Road and Greenlane Road. His wife Vanessa with daughters Stella and Zayla are in the background. Photo: James Morgan

Community and Canadian spirit were strong on the evening of Tuesday, August 10, when residents of Bangs Road and Greenlane Road in Champlain Township gathered to offer their best wishes to neighbour, friend, and relative Joey Desjardins.

Desjardins was named to Canada’s national para-cycling team on July 7 and will represent Canada at the Paralympic Games in Tokyo. He leaves for Tokyo on August 23.

Eleanor Sides, who lives near the intersection of Greenlane and Bangs roads, does not know Desjardins well, but she could not let his trip to the Paralympics go unnoticed.

“We’ve never had anybody go to the Paralympics who is our neighbour!”

Sides got the word out to as many neighbours as possible, knocking on doors and making phone calls.

Approximately 60 people gathered at the intersection on the evening of August 10 to greet Desjardins, wave flags, and cheer him on before he left for training in Bromont in the Eastern Townships on August 13.

Of course, Desjardins cycled his way to meet the gathering. He practiced by following the rougher terrain in the grass, going uphill along Bangs Road. His spouse Vanessa walked, while daughters Stella and Zayla pedalled their bicycles on the pavement.

Desjardins is one of three para-cyclists from Canada who will be racing in the extremely competitive Men’s H3 category in Tokyo, and they are among 128 Canadians competing at the games. He has been training since 2015 and can be seen riding along roads anywhere between Treadwell in the west and Rigaud in the east.

At the gathering on August 10, spectators cheered on Desjardins and he took a few minutes to answer their questions about training, competition, and what he can expect during his stay in Japan.

“What colour is the medal going to be?” a man shouted from the audience.

Desjardins has two chances to bring home a medal for Canada. The time trial is scheduled for August 31 and the 79-kilometre road race is planned for September 1. He estimated it will take approximately 2.5 hours to complete the road race and competitors will reach speeds up to 40 kilometres per hour.

Efforts are being organized to broadcast Desjardins’ races on a large screen at the Espace Green Beaver pop-up park in downtown Hawkesbury, to enable a hometown crowd to watch together outdoors. Organizer Suzanne Hocquard said more details will be available once television schedules are known. 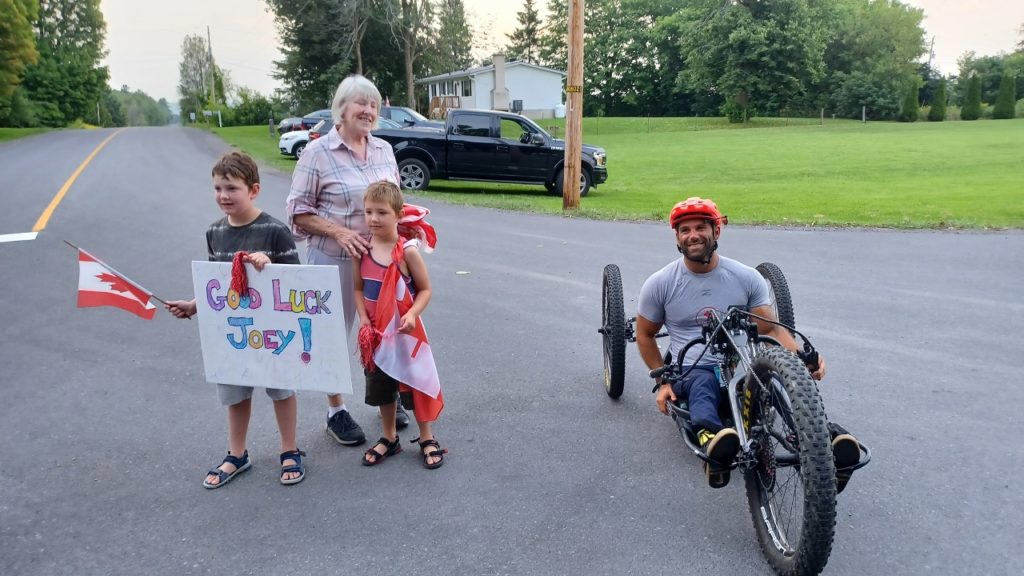 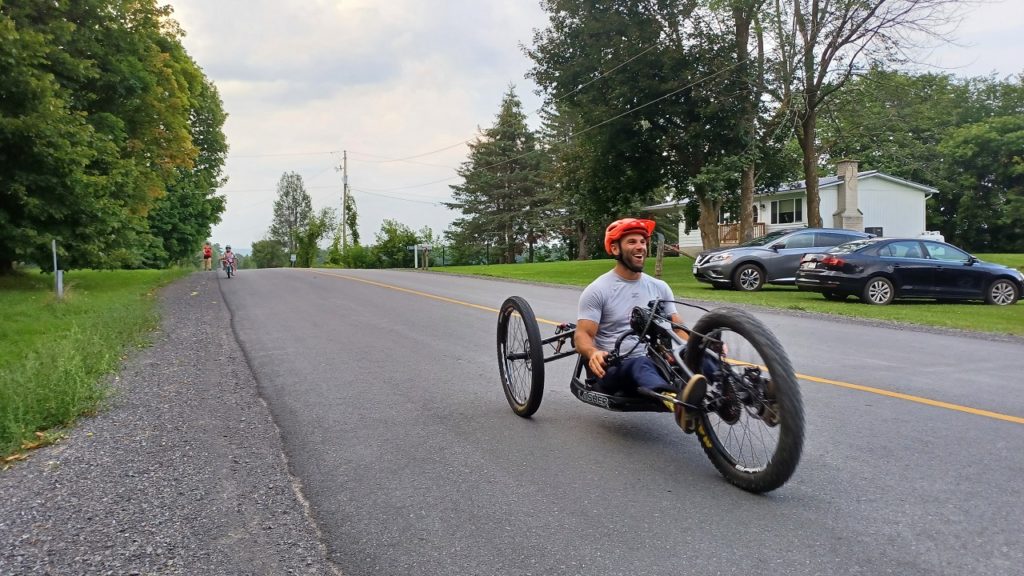 A smiling Joey Desjardins arrives at a send-off celebration held by neighbours and friends. His daughters Stella and Zayla, and wife Vanessa are following in the background on Bangs Road. Photo: James Morgan 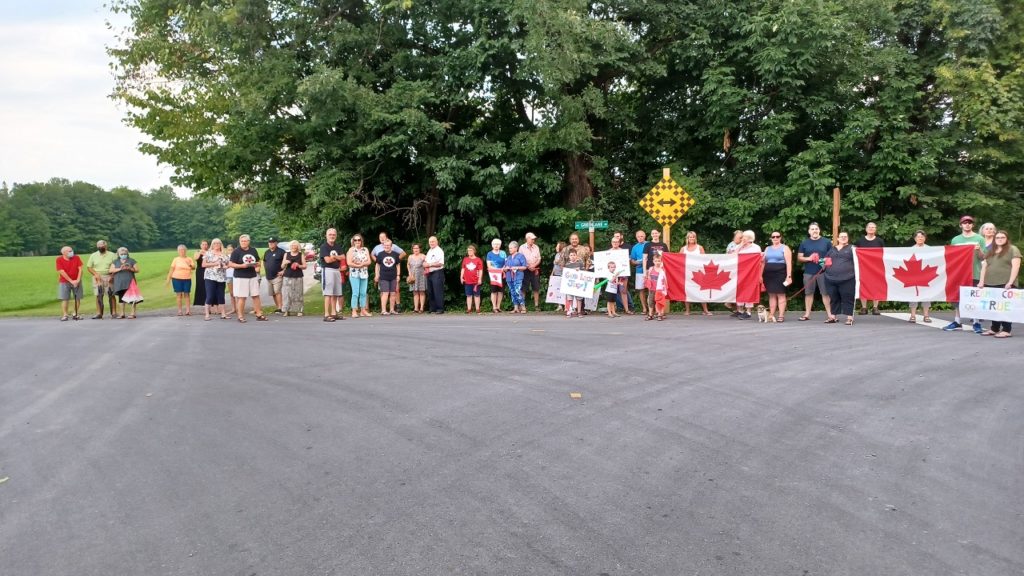