175th anniversary is a look back at memories, changes at Holy Trinity Anglican Church in Hawkesbury 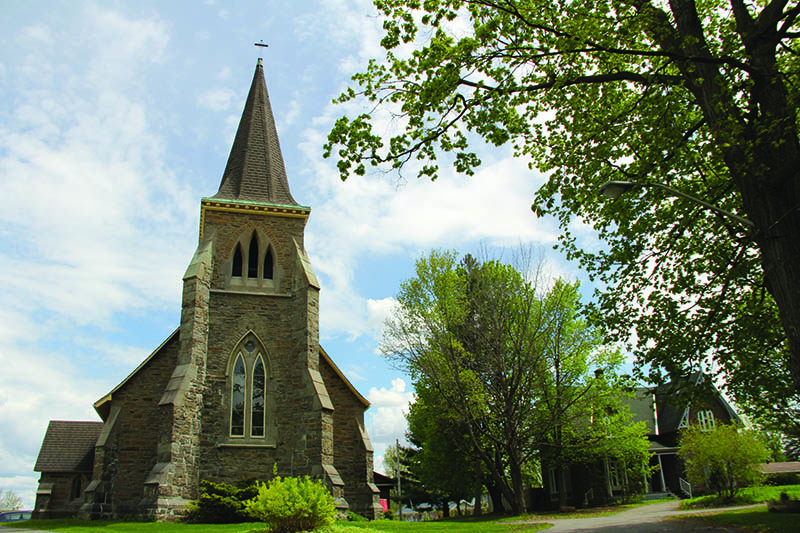 Holy Trinity Anglican Church was built in 1846. The church and congregation celebrate 175 years this Sunday, August 15, 2021.

On August 15, the church will celebrate 175 years of existence. The first service took place there on August 16, 1846.

As with many church congregations these days, anniversaries are bittersweet. While memories are fondly recalled by older parishioners, they are also at the same time witnessing diminishing attendance at their much-loved churches. As Holy Trinity parishioners look back at a busy and vibrant history, they also know that there are questions ahead about what the future holds.

Mary-Ellinor Partridge has been attending Holy Trinity Anglican Church since April of 1958. She recalls the date easily because she began attending church here right after marrying Byers Partridge, whose family attended church here.

At age 91, Mrs. Partridge recalls a wintry day in 1959, pushing a stroller with baby Anne in it, to the old town hall in Hawkesbury to attend her first-ever church bazaar.

“That’s where they were held in those days,” Mrs. Partridge says, adding those were the days before the church had a parish hall.

“I remember going up a few steps into the town hall and there was a little room and they were serving tea and all the food out of there. It was quite something,” she said, adding that all of the tables, chairs, china and cutlery would have had to be transported there to hold the event.

People take parish halls for granted, she points out. “But they were not always there. Church groups used to meet in members’ homes,” she continued.

She can recall easily the many events and fundraisers which took place at the church. The church’s annual Christmas bazaar was an important event, where the well-known Christmas wreaths made by parishioners were sold each year. The various types of greenery harvested by volunteers on the nearby Simpson farm and then made into wreaths was a tradition that lasted for decades while it raised thousands of dollars to support the church and its buildings.

She describes the bazaar as magical, with the ladies of the church offering embroidered and other fine handiwork for sale. Funds were raised thanks to the sale of handmade wreaths, but also from the tea and luncheon, offered at one end of the church hall. A bake sale, a sale of secondhand items (called the White Elephant Table), movies shown on 16-mm projectors for children and a nursery for the younger children, complete with a fish pond, were all part of this event.

For Mrs. Partridge, it was the fellowship and friendships that flourished during these busy years that she remembers so well.

She lists off names of those she remembers for their commitment and 100% involvement. She recalls the line-ups to gain admittance to the Christmas bazaar and the rummage sales.

“These were exceptional times but I don’t think we realized it when we were living through them,” Mrs. Partridge says.

Various groups were part of the church within the church: a men’s group, a youth group, a Ladies Guild (which met during the afternoon), St. Monica’s Guild (evenings meetings for mothers who could not take time out from their busy day for meetings), a busy Sunday School contingent of children, teachers and a superintendent, an Altar Guild and of course, volunteers who kept the grass cut on the large property which fronts on McGill Street and encompasses not just the church and hall, which backs onto Stanley Street, but also the church rectory – a stately three-bedroom home right next to the church.

On Sunday, August 15, when the church holds a service to mark the 175-year milestone anniversary, Father Frank Kirby will be recalling and sharing memories of his own. The Venerable Frank Kirby attended the church as a youngster and his parents, Dr. Royal Kirby and Irene Kirby, were part of the parish.

The retired Archdeacon, who is informally called “Father Frank” said it is an honour to be back in his home church after a 37-year career in the ministry. Calling it the “autumn” of his career, he says that in some ways, nothing has changed but in other ways, a lot has changed.

“I have returned to meet some people I have known for years but there are new faces and new people I have come to know only recently,” he says.

It is not an easy time for the institutional church, he points out.

“It is no different here in Eastern Ontario,” he added, saying that small and rural church congregations are feeling the effects of decreasing numbers over the years. But it is tougher on those churches which were smaller to begin with, he explains.

He credits societal changes, more choices of activities, shopping and other things on Sundays as being part of the reason church attendance has declined.

“It is a time to reflect on the past and think back to the values from earlier times. Sometimes, I think we would do well to pay attention to that. A lot has changed, but a lot has been lost,” he continued.

What the future holds for small congregations and the churches which are such a part of them is unknown, he admits.

“I often think of a sign that was outside of my office at Trinity Church in Cornwall. It said, ‘Faith is not knowing what the future holds, but knowing who holds the future.’ ”

At 11 a.m. on August 15, Father Frank Kirby will be presiding at the Eucharist service at Holy Trinity Anglican Church in Hawkesbury. Seating is limited due to COVID-19 restrictions, he pointed out.

In 1845, the request for a church was initiated by the correspondence of Thomas Higginson, backed by others from the community to Bishop Strachan of Toronto, to appoint a missionary to Hawkesbury. The land for the church was procured from the estate of the Hon. Peter McGill, for the cost of five shillings.

Building started immediately with blue and grey limestone quarried at the Ottawa river and from the community including Green Lane Road, under the direction of stonemason William Allison. The building of the church and later the rectory was entrusted to John W. Higginson, master builder and a member of one of the founding families of the church.

The church was erected in 1846, in a plain, uninteresting style with wide “Canadian Gothic” windows and a door at the base of the bell tower.

In 1857 repairs were needed, so changes were made. The balcony and stairs were removed. A side entrance, corner buttresses, a chancel and vestry were added. The work again was entrusted to John W. Higginson.

The church reopened in a thirteenth century English style, with a service December 18, 1859. As well as structural changes, the first stained glass windows behind the altar were installed. These three windows were copied from ones in Salisbury Cathedral and erected in memory of Lieutenant- Colonel George Hamilton by his sons.

The Hamiltons were a prominent family in Hawkesbury owning Hawkesbury Mills and were major contributors to the church.

Charles, the fourth son of Lt. Col. George Hamilton was influential in setting up Synodal government in the Anglican church.  In 1896 the Diocese of Ottawa was formed and Charles became the first Anglican Bishop.

In 1872, plans were made to build a parsonage and outbuildings on the church lot. The Honourable John Hamilton would donate $1000.00 if the congregation would raise $500.00. On October 1st 1872 a contract was signed with John W. Higginson to build the rectory at a cost of $4,350.00. The contract included a coach house, stable with four stalls, a woodshed and privies, as well as the parsonage. The stone rectory, in a style to correspond with the church and the design furnished by John W. Higginson, was completed in 1873.

In 1872, a bell cast by Mears and Stainbanks of London at the cost of $450.00, was imported for the belfry at Holy Trinity. It was rung for the first time on December the 8th and was renowned at the time for the clear ringing of a Tenor C.

A new pipe organ was purchased from Casavant Freres in Quebec, at a cost of $5,775.00. It was dedicated in November 1957, in memory of members of the Armed Forces from the parish who lost their lives serving their country. This organ replaced an early Warren organ, built by Mr. Warren from Montreal. It had been presented to the church by the Hamilton family at a cost of $1,100.00. With the new organ, changes were again made within the church. The pulpit was moved to the left side of the church and half of the choir seats were removed.

Before the end of the 50’s, a decision was made to build a parish hall.

On May 28th 1961 a sod-turning event took place for the building of a parish hall, under the contract of Sinclair Supply Company Limited of Vankleek Hill. The cornerstone was laid by Miss Maria Higginson on June 25th 1961 and the hall was finished, with dedication on September 14th 1961. The corner pillars of the new hall were matching stone to the church and taken from the same quarry as in 1846.

“here is an edifice capable of resisting the wear and tear of time for many a generation, and an ornament that should be preserved as representing in stone the piety and zeal of half a century, till it has become one of the most interesting historic landmarks of the Ottawa Valley” (C. Thomas 1981)

“For each of us who have worshiped within these hallowed walls the memories will be different.”  “This church then, is a symbol of our calling – to worship and to witness, to serve and to suffer”   (William R. Byers 1981)

The history of the church was provided by long-time parishioner Eleanor Sides, who used the History of the Counties: Argenteuil, Quebec and Prescott, Ontario by C. Thomas (1981) and The Church On The Hill, by William R. Byers (1981).