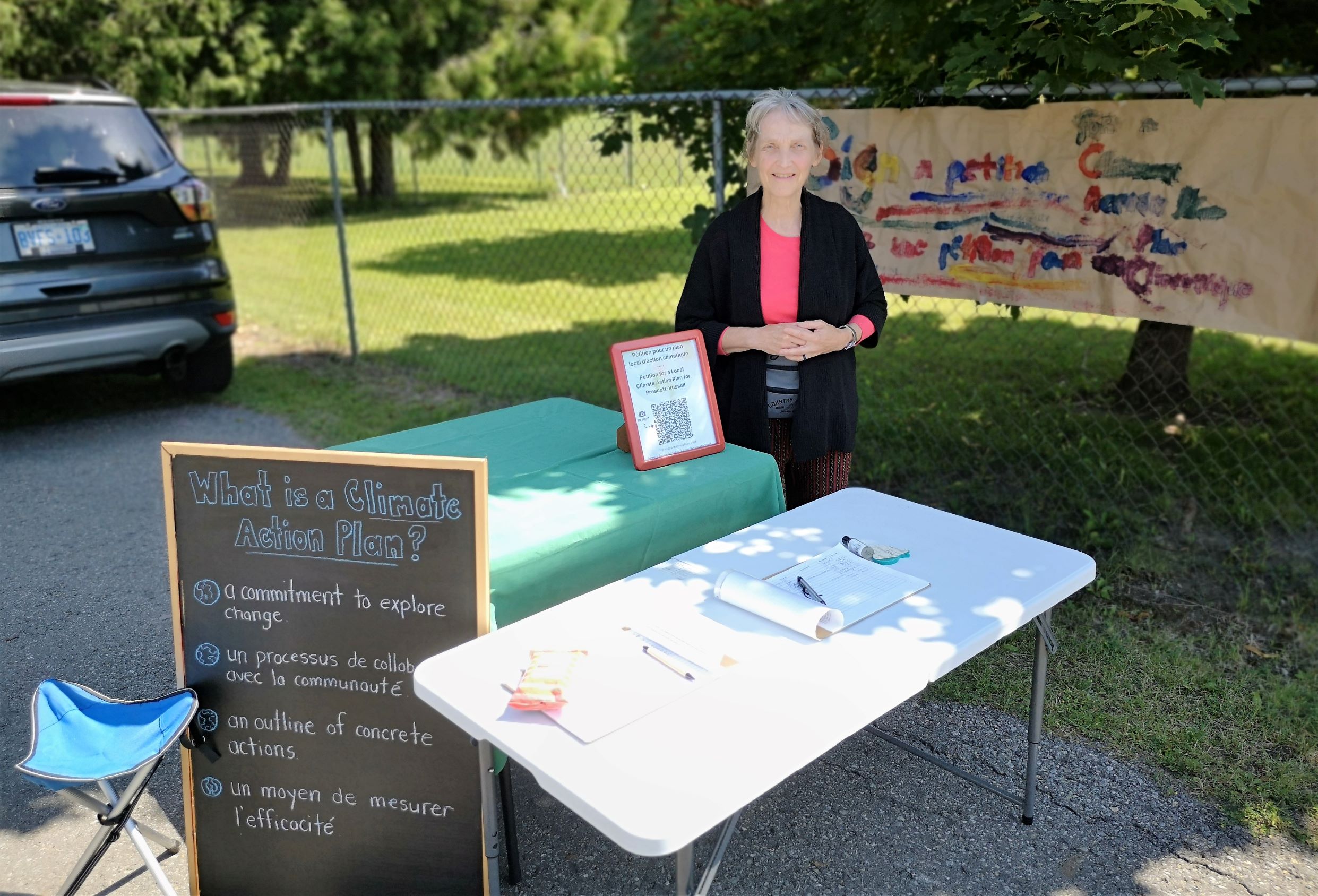 Lynn Ovenden, of the UCPR Coalition for Climate Action, was providing information on the group’s objectives and petition at the Vankleek Hill Farmers’ Market. The group is seeking support as it encourages municipalities within the United Counties of Prescott and Russell to join together on a regional climate action plan. Photo by Reid Masson

A counties-wide coalition of local grassroots groups and citizens is urging the municipal governments within the United Counties of Prescott-Russell (UCPR) to join together to collaborate on a regional climate action plan.

The UCPR Coalition for Climate Action is asking for municipal leadership in creating a low-carbon economy in the United Counties of Prescott-Russell (UCPR), an economy that encourages green innovation, and which will achieve energy cost savings and employment growth. The group wants to support resilience in local social networks and ecosystems in the face of climate change.

The coalition has launched an online petition inviting residents of UCPR to support the development of a local climate action plan. As of August 4, the petition had received 230 signatures.

The group is also requesting endorsements from community groups and businesses. By the fall, a representative will speak with the council of each municipality in the UCPR, and then with the Council of UCPR mayors. Presentations to the municipal councils of East Hawkesbury, La Nation, Alfred-Plantagenet, Russell and Clarence-Rockland are scheduled in August.

“It is a very diverse group of people,” said Thaila Riden, who will be representing the group in a presentation to Township of Champlain council later this month. “We will be reaching out to the community, businesses and farmers in the area to help figure out how we deal with climate change and curbing emissions.”

“We want to start the conversation here in a collaborative way,” Riden added, noting the objective is not to point fingers. “We’re all on the same planet.”

The group has been providing information and inviting residents of the United Counties to sign the petition at various events, including farmers’ markets through Prescott-Russell.

In a press release the group noted the local climate action plan is a strategy and commitment to meet climate-related challenges and reduce greenhouse gas emissions in a county or municipality. It requires an inventory of current emissions, an assessment of local climate challenges and solutions, and a plan to create economic benefits and better quality of life through actions that reduce emissions.

The plan is community-driven, meaning that the community sets its emissions reduction target and determines how to achieve it. Group members say that with public engagement and expert advice, the UCPR would be in step with Canada’s overall climate action plan.

The UCPR Coalition for Climate Action wants the UCPR to join the more than 450 Canadian municipalities in the Partners for Climate Protection https://www.pcp-ppc.ca/. The government-sponsored program supports municipalities in developing their own unique climate action plans. Projects common to many local climate action plans include retrofit programs for buildings, electric vehicle charging stations and procurement, walking and cycling infrastructure, public transit, tree planting, and organics collection and compost.

The coalition is currently looking to recruit members and signatures for the petition. Anyone wishing more information, or who wants to sign the petition, can visit the EcoEast – EcoEst Facebook page https://www.facebook.com/ecoeastecoest.