This Week in Local History – July 14, 2021 – The Review Archives – Cars without lights and crushed fingers 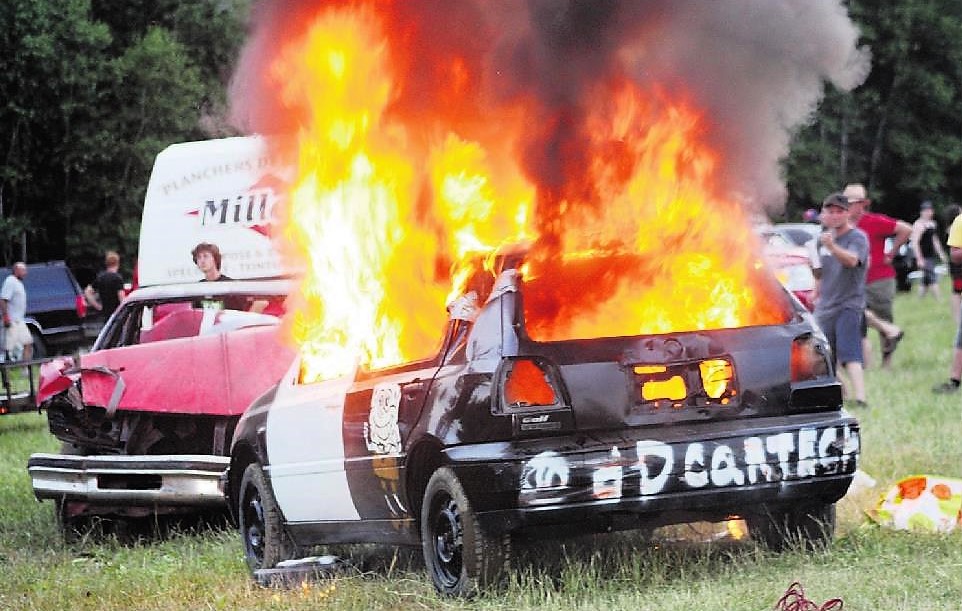 This Week in History – July 9, 2011 – The demolition derby returned to the 186th annual Lachute Fair with a bang. Highlights included a driver who lost his steering wheel halfway through the derby, another that flipped his car and a few which were pushed over barrier blocks. Seen here, a car that had been removed from the arena burst into flames in the driver’s pit area.

10 Years ago
Students asked to transition to online learning
The Review, July 13, 2011 – VANKLEEK HILL -Students, even those at the high-school level, are increasingly living their lives online, so should they also be asked to take some of their courses online? That is the question parents and administrators are discussing as the 2010-2011 school year wraps up at Vankleek Hill Collegiate Institute and other area high schools. Faced with a steady decline in enrollment numbers, the Upper Canada District School Board is but one of the local boards considering a switch to online learning for certain courses; namely calculus and physics.

25 Years Ago
Surprise police appointment gets mixed reaction
The Review, July 10, 1996 – HAWKESBURY – The appointment of an acting chief of the Hawkesbury Police Service has raised new hopes for a fresh start for the department. Paul Roy, a staff sergeant with the Ottawa-Carleton Regional Police Service, took over on July 8 as interim director of the force headed by Chief Michel Denis for the past 11 years. With officers calling for his resignation, Denis went on sick leave July 1.

50 Years Ago
Thousands tour Hawkesbury English School
The Review, July 14, 1971 – HAWKESBURY – Some 500 former pupils and teachers registered at the Hawkesbury English School for the reunion weekend. It is estimated more than a thousand persons toured the school and/or attended the Saturday night dance. Many also took the opportunity to tour the new Prescott County Public School. Saturday night, the Holiday Motel’s Bonsoir Lounge was filled to capacity with music from the orchestra under George Seay providing just the right background.

100 Years Ago
Cars without lights a serious problem
The Review, July 8, 1921 – VANKLEEK HILL – Last Saturday evening we counted some 26 cars parked on Main Street without lights; five more were parked on the wrong side. Three cars passed through out streets at 10 p.m. without lights and four cars had only one light. All this is direct violation of the law. There will be a serious accident at the corner of Main and High streets if the traffic regulations are not kept by one driver out of 25.

125 Years Ago
Fingers crushed at McLaurin factory
The Review, July 17, 1896 – Ed Roberts had the fingers of his right hand badly crushed last Friday, while attempting to adjust a belt in McLaurin’s factory. The accident might have had more serious results after his foot slipped, throwing his hand into the cog wheels. Mr. Roberts’ agility alone saved him from serious injury.