Jurgen Ismaili found himself welcomed with open arms when he immigrated from Albania for a new life in Canada. Jurgen has been working for the past two years for former Hawkesbury resident Leslie Higginson at his company in Kingston. To celebrate his achievement of permanent residency Jurgen wrote this letter to thank the many people who have helped him since he moved to Canada.

I left Albania when I was 23 years old for a new life in Canada. I had already completed an engineering degree and was working toward my master’s when I got the opportunity to immigrate to Canada. This was in part because I had been accepted as a student in the Survey Technician Program at Loyalist College in Belleville, thus granting me a student visa for two years.

My Dad arranged for me to stay with an Albanian friend of his in Toronto when I arrived. Unfortunately, this accommodation was uncomfortable and difficult, so I decided to head for Belleville earlier than planned even though the housing I had arranged there did not start until a few days later. I arrived by bus in downtown Belleville about 8:00 PM and began looking for a hotel.  The first one I tried was no longer operating as a hotel. I stopped a man on the street who was out walking his dog and asked where another hotel might be. He said the only hotels still operating were up near the 401, several kilometres from here.

I was weary from the long bus ride and from trying to navigate in this new language. This man must have sensed this as he added he knew of a bed and breakfast not far from here that I might try. I got the address and headed there. When I knocked at the door a lady answered and I explained my plight. She was very nice but explained that while it was a B&B, they were completely full. I must have looked downcast as she took pity on me and said they did have an air mattress I could use. I answered, “What is an air mattress?”  I was happy to give it a try as the next step was to spend the night in the bus station.

The nice lady suggested I take a shower, a subtle hint, while she and her husband prepared for me a lovely dinner and got things arranged. After the shower we had a nice conversation and I promised them that one day I would pay back their favour. They told me that it wasn’t necessary but, in the future, I could do the same for someone else. After finishing dinner, she showed me to a room with a lovely big bed. I didn’t ask any further questions about the air mattress but just collapsed with exhaustion and slept well.

I stayed with this family for a few days until moving into the student accommodation I had arranged. Upon leaving, this couple invited me to return to their home for Thanksgiving. It was so wonderful to be welcomed by a Canadian family. And for every holiday since my arrival in Canada I have feasted with this generous family. They have become my Canadian family. The following Easter when I was once again with them, Tara, excitedly told me about some renovations they had recently completed which she wanted to show me. Upstairs we went, and she showed me their lovely new ensuite which led off the master bedroom. “But this is the room where I slept on that first night?” I queried. “Where did you sleep that night? “I slept on the couch” she said. “And your husband Wayne?” “He slept on the air mattress” she said and smiled.

I have now been in Canada for three years and just recently received my permanent residency. While studying at Loyalist College I had to work three part-time jobs to make ends meet. Being a small town, Belleville’s transit system was limited, and I had to walk home from my job at Walmart which ended after the busses quit running. One night I trudged home the six kilometres in a wicked snowstorm. Welcome to Canada indeed!

I graduated from the Survey Technician course with honours and have begun working on my certification as an Ontario Land Surveyor which involves completing several university level courses and an internship. I was accepted as an articling student in a firm, Leslie M. Higginson Surveying, in Kingston two years ago and hope to finish my course work and internship in another year.

I experienced many other examples of the generous spirit of Canadians as I sought recognition for my previous education and faced the financial burden of international student fees.

An important part of my successful transition to this country is the welcome I received upon arriving in Belleville on that fateful night. Tara and her family continue to be a big part of my new life in Canada, and I look forward to spending time with them every holiday.

As it turned out, that summer I had a chance to pay back some of the kindness I had received as a newcomer. I got a summer job in a survey company in Newmarket. I found a place to live without too much trouble and started my first real surveying job. Another international student had also been hired there that summer and as we chatted, I found out he was sleeping in his car as he couldn’t find anywhere to live that he could afford. I remembered Wayne’s words about paying it back when I could and did not hesitate to offer him the couch in my apartment, knowing how much it meant to me to be welcomed in when I had nowhere to stay in this new country of Canada.

Having achieved permanent residency, I look forward to applying for Canadian citizenship in the next few years. Then I can truly call myself a Canadian in law as well as in spirit. 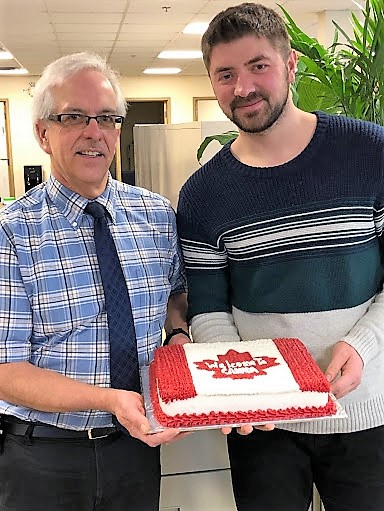 What compels me to move to Vankleek Hill?