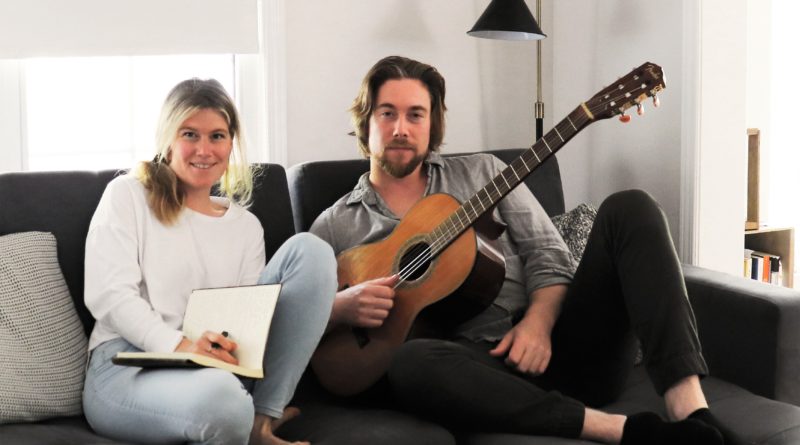 Celta Riden (left) and Will Laurin have been posting videos of their original songs on their Alpine Sunshine YouTube channel. Photo courtesy of Alpine Sunshine

A Vankleek Hill couple is bringing a little sunshine to music lovers in the region, posting videos of their original songs on YouTube and Facebook.

Celta Riden and Will Laurin started their YouTube channel Alpine Sunshine in early February. The name is also the working title for the duo, but neither member is sure how far the project will go.

Riden says she grew up in a very musical family, but has herself previously only sang for fun.

“Before starting Alpine Sunshine I didn’t really put myself out there musically so it did surprise some people, even within our community,” she explains.

The aspiring musician says she decided to focus on songwriting back in September of 2020, as the couple continued to spend more time at home together due to the COVID-19 pandemic.

“We would play cover songs in the past for fun, but as of last September I started getting into writing lyrics and melodies to my own songs. It was also a great outlet for William and I to do something creative together,” Riden says. “It just kind of took off from there.”

Riden began to tap into surrounding emotions and inspirations during the pandemic – writing down her thoughts and putting them into song.

“With everything going on in the world, I wanted to be productive and put my energy towards creating something positive,” recalls the duo’s singer-songwriter, who found the words pouring out as she put pen to paper.

Laurin – a full time musician – was initially unsure if he could commit to another project.

“Celta has always had musical ideas, but since the pandemic it just came to the point where she wanted to work them out, so she approached me for help,” says Laurin, who is using the opportunity to learn all the intricacies of recording music in a home studio. “It only made sense to want to be a part of something that would allow us to create music together and was completely our own.”

Since uploading their first song and video Dream on their newly created YouTube channel last February, Riden and Laurin have added five more original recordings to the site. They began posting their videos on their respective Facebook pages just a month ago, and have already received a great deal of positive reactions to their work.

“It’s always a good feeling when friends and family are enjoying the outcome of something you’ve worked hard at – that means a lot,” Riden says.

As they continue to make music, Riden and Laurin are each exploring different aspects of their craft. An accomplished drummer, Laurin has also been adding a little guitar to Alpine Sunshine’s videos, while Riden has taken up keyboard. She can be seen playing piano on several of Alpine Sunshine’s videos, despite only learning to play the instrument over the past few months.

“For my birthday William got me a portable mini keyboard and I would sit at it and play around with whatever would sound good to the ear, but I would tell Will I don’t know which chords I’m playing,” the songwriter says, breaking into peals of laughter. “I think if someone who plays piano watches my videos they’ll be able to detect that.”

Laurin, who began playing guitar at the age of 12, says his skills have been limited due to his work as a drummer, but feels inspired by the new songs.

“It’s challenging me to learn new chords – I’ve been stuck in the same box on guitar for so long,” Laurin says.

In addition to the six songs recorded and uploaded to YouTube, Riden has already completed writing several other songs, and has dozens of ideas for others.

As to where it all will lead, Riden and Laurin say they are realists. They have no expectations and for now are just having fun making music together.

“I definitely want to keep pursuing songwriting and see where that can take me,” Riden says. “This is a nice portfolio that shows what we have created, so whether I can take that and apply it to pursuing songwriting or Will can take it as a part of his music career is something only time will tell.”