St. Andrew’s Church is the next project for Claude Brabant 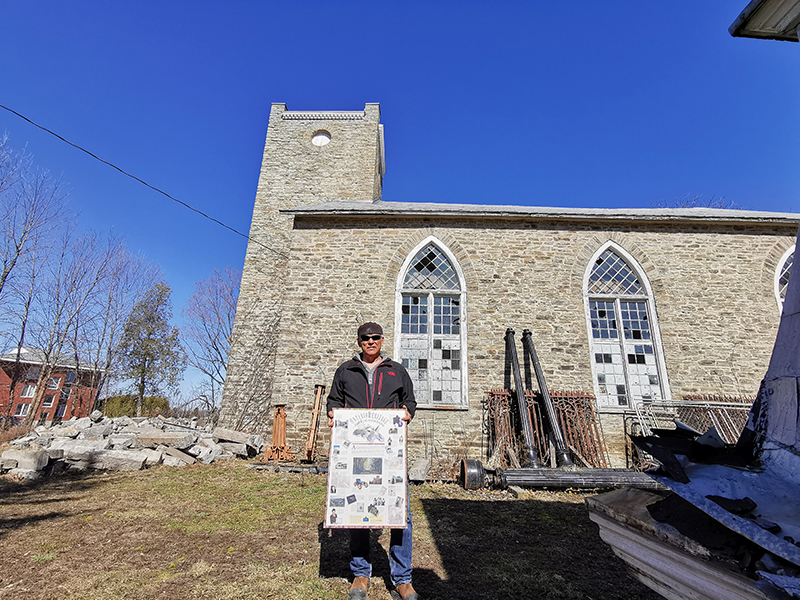 Claude Brabant is known for the transformation of many of the buildings in L’Orignal’s downtown area around the courthouse. St. Andrew’s Church is next, as Brabant has plans to use the salvaged top portion of a convent demolished a few years ago in Vankleek Hill to create a new entrance to the church – this time, facing King Street. Brabant is seen here holding an Ontario Heritage Foundation (now Ontario Heritage Trust) poster which features his preservation and renovation of the Poulin-Clément store in L’Orignal. Photo: Louise Sproule

A new life lies ahead for the former St. Andrew’s United Church on King Street in L’Orignal.

A resolution from Champlain Township at the end of its regular meeting on April 8 directed its chief building official to issue a building permit for exterior renovations at 1008 King Street in L’Orignal. Although the resolution itself identified the property by referring only to its roll number, Champlain Township Mayor Normand Riopel confirmed that the building permit was for the heritage church building, owned by Claude Brabant.

According to the mayor, the issuing of the building permit had been discussed earlier that day as part of an in-camera session because an identifiable person was part of the discussion and the municipal council knew the building had a heritage status – of sorts – related to a bylaw passed by the former Village of L’Orignal council.

There is a plaque at the site, indicating that the structure dates back to 1832, after the donation of land in 1822 by Charles Treadwell for the construction of the church for the Presbyterian congregation. According to the Architectural and Historic Sites Board of Ontario plaque, Treadwell was the seigneur of Pointe à L’Orignac. In 1925, the congregation voted to join the United Church of Canada.

Around 2004, the United Church congregation had decided it would sell the building, as the congregation was finding the upkeep costs too much. At that time, the building was only being used for summer church services. It was listed for sale in June 2004 at $125,000, but was taken off the market about six months later. Champlain Township briefly considered purchasing the building and another prospective buyer had wanted to create residential spaces in the building – something the council of the time was not keen about.

“I will be starting on this in the fall,” Brabant says as he unlocks the door to go inside the building. The Review met with Brabant at the former church last week.

Brabant says his renovation plans were put on hold while he finished other projects. An ongoing renovation/conversion of the former Knights of Columbus building, also located on King Street, is nearing completion – he is creating additional courtroom spaces, with accessible washrooms and private entrances for judges.

The enthusiastic stonemason has experience, because he has done all this before. There are several buildings in the core of L’Orignal, close to the original and oldest operating courthouse in the province, which have been purchased by Brabant, renovated and updated for use as part of the local court infrastructure, including the construction of holding cells. The construction of holding cells coincided with the closure of the L’Orignal Jail in 1998, due to safety concerns.

Throughout his decades of work in the region and mostly in L’Orignal, the hallmark of Brabant’s work centres on his passion for stonework, coupled with his love of history.

A walk past his buildings on King Street attest to his passion for stonemasonry. Brabant is also adept at using salvaged heritage items to enhance his properties, giving interiors a look that belies the real age of the interior. Pillars, heritage door frames and window frames, church pews, statues, stones, light fixtures and more are reclaimed by Brabant and saved for future projects.

Which brings us to St. Andrew’s Church, where the salvaged top portion of the former St. Mary’s Convent in Vankleek Hill sits in the front yard. Brabant bought and removed the top portion of the tower along with other convent elements, such as windows and stone ledges, before the building was demolished in 2017.

Having the tower – in a dilapidated state – sitting in the churchyard facing King Street has been the subject of much criticism, but after delays with the Knights of Columbus hall project, Brabant is ready to go and his plan for the exterior – at least – has been given the go-ahead by council.

What is the plan?

The convent tower will be part of a new entrance that will encompass the center side window; an entrance facing King Street, according to Brabant, will create a welcoming portico to the interior space, which he hopes to convert to a mini concert space, or boîte à chanson.

Surrounded by iron-pillar light standards which he salvaged from Ottawa’s Sparks Street Mall and portions of wrought-iron fencing, Brabant says he hopes to begin work on the exterior make-over this autumn.

“I know there are people who say the tower belongs to Vankleek Hill. But where would it go in Vankleek Hill?” Brabant says. “There would be nothing left of the convent if I had not bought and kept this part,”

Inside the church, in addition to the mini concert space, he is considering creating a residential location in the former Sunday School area, which runs the length of the church on the north side. That space was created when a second wall was built and a second ceiling installed decades ago, after a 1910 fire damaged the original domed ceiling. 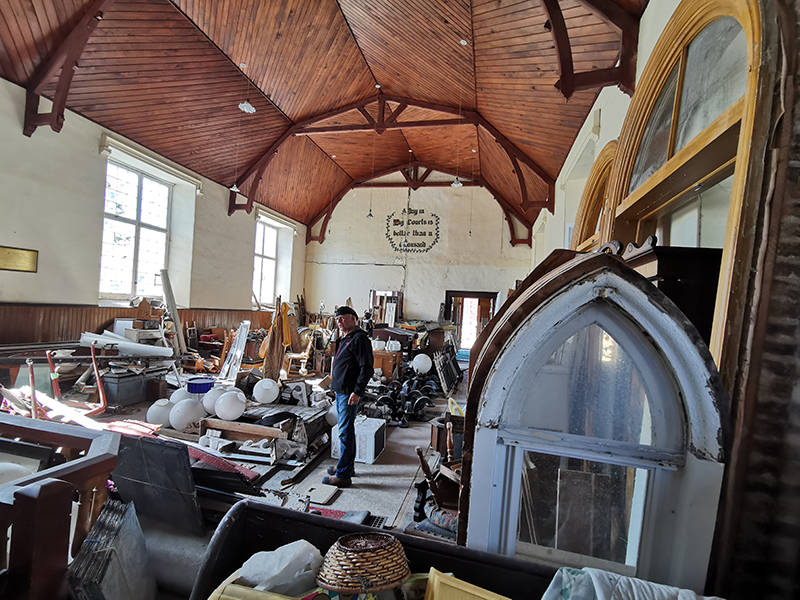 Inside the former church building, Claude Brabant has architectural elements and other salvaged items waiting for use in his projects. Note the secondary ceiling in the church. Above what you see is the original domed ceiling.
Photo: Louise Sproule 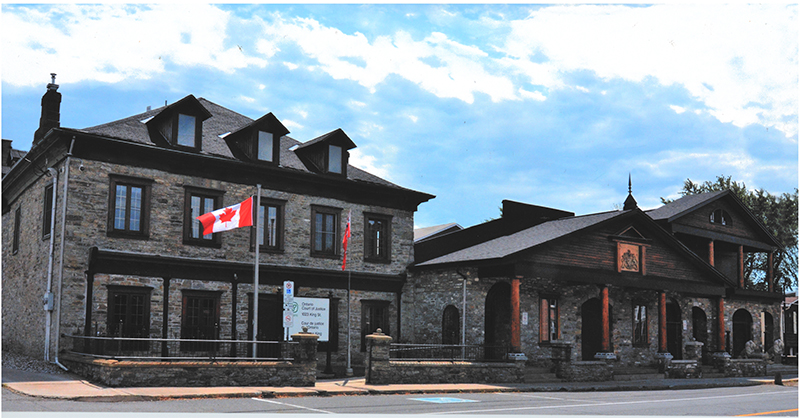 These buildings are on King Street and are home to the Provincial Court System.
Photo: Courtesy of Claude Brabant 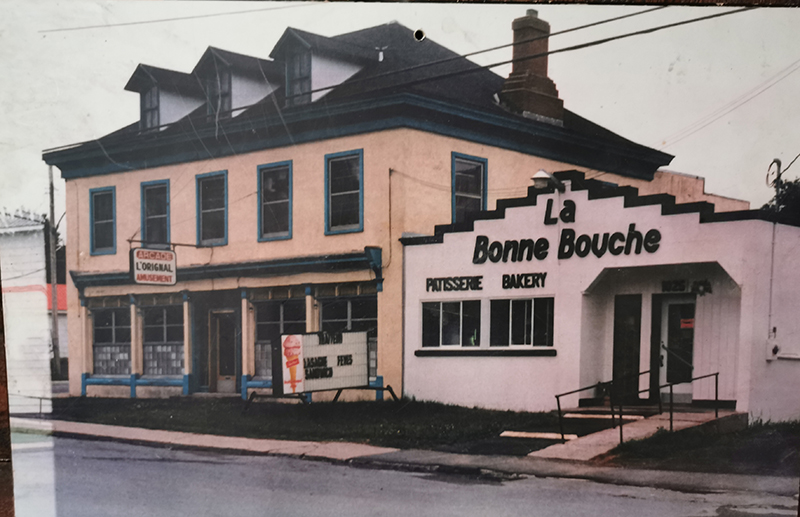 Before: The Poulin-Clément store, at left, before the facing was removed to reveal the stone underneath.
Photo: courtesy of Claude Brabant

Champlain Township’s mayor is confident that what comes next will be a plus for L’Orignal.

“We know the kind of work he does. He does an amazing job; you just have to look at the other buildings around there. He brought life to that village,” Riopel commented. The mayor is confident Brabant’s plans for the church exterior will embellish the church.

The stonemason says he comes to his skills because they were passed down in his family. His has a portfolio containing awards from the Ontario Heritage Foundation, and other letters of recognition for his work.

Brabant is excited about getting to work.

“I know it is hard for me to explain sometimes, but I see these projects in my head,” says the experienced stone mason, who expects the church renovation to be his final project. “I don’t know where it comes from, but I see how things can be.”

“I just want to make something beautiful.”