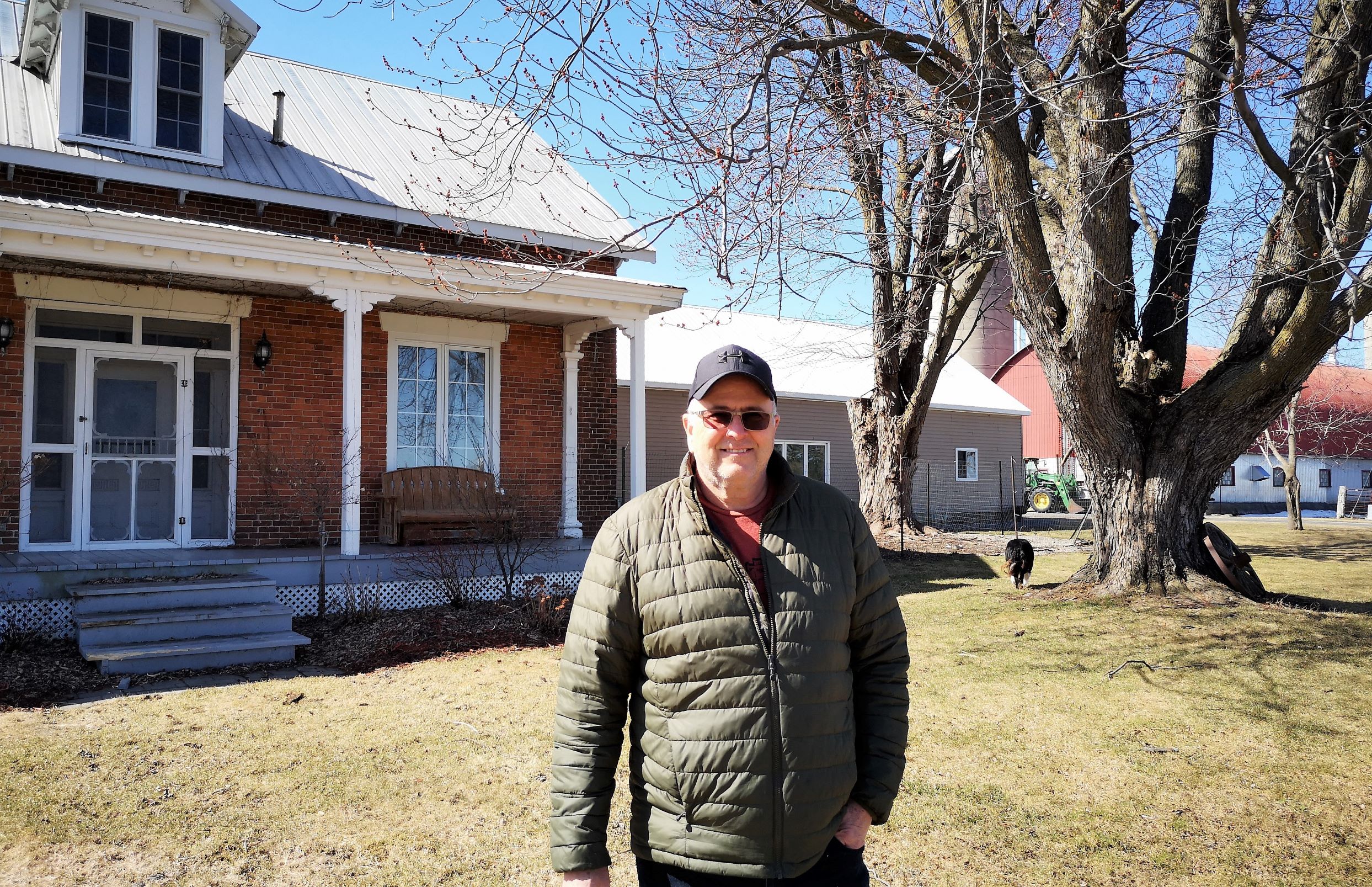 Bruce Mode represents the sixth generation of his family at Bonnie Brae farm, located east of Vankleek Hill. Bonnie Brae celebrates its 200th anniversary this year, having been owned by the Mode family since 1821. Photo by Reid Masson

This year (2021) marks the 200th anniversary of one of the oldest farms in the Vankleek Hill area. The Mode Farm – better known as Bonnie Brae – has been in the family for two centuries since the land was acquired by George Mode in 1821.

“There are older farms closer to the river, because that’s the area that got settled earlier,” says Bruce Mode, who represents the sixth generation of the Mode family at Bonnie Brae. “But there’s not too many that are under the same family for 200 years.”

Sitting in the kitchen of the historic farmhouse on the property located east of Vankleek Hill, Bruce Mode reflects on his family’s past, while thumbing through a photocopied document entitled ‘The History of the Mode Family of the Ottawa Valley from 1802 to the 20th Century’. Mode believes he has a second copy “somewhere”, but for the most part it is all of the history he has about the family. The 20-year-old dog-eared document contains information on the descendants of George Mode (1788-1872) and his wife Johannah Waddell (1803-1890).

“I’m not one who is a big history person,” Mode admits. “I do kind of wish I knew more about family history and stuff now.”

In February of 1946, The Review documented the history of Bonnie Brae, publishing a feature on the farm in celebration of its 125th anniversary. The author of the article wrote that shortly after purchasing the property in 1821. George Mode cleared off a small space, then erected a house, “the boards of which were drawn many miles by oxen on the crotch of a tree.”

The brick farmhouse in which Bruce Mode lives was built in 1856, along with a high stone wall in front of the home. By the time of its 125th anniversary in 1946, Bonnie Brae was one of the largest and most modern dairy operations in Eastern Ontario, wrote The Review.

“Today the farm is owned and operated by G. D. Mode and son Sydney and is modern in every way, with one of Ontario’s largest dairy barns built 20 years ago. Although cultivated for so many years, the soil has lost none of its fertility, for today this farm is in as high a state of cultivation as at any time since taken from the Crown. The large barn, the hedges, the orchard and everything about the farm give evidence and skill of generations gone before.”

While Bruce Mode has few memories of his grandfather, he worked alongside his father Sydney on the 200-acre property for more than two decades. He remembers Bonnie Brae had its own small power station, long before electricity was available in the area, and that the family had one of the best-known herds in Eastern Ontario.

“The original barn was very modern at one time,” Mode recalls. “Our animals were all purebreds, so every animal we bred or sold had the prefix Bonnie Brae.”

“My dad also loved gladiolas. He would test new varieties and sell his flowers everywhere.”

Through generations of the Modes at Bonnie Brae, the family always raised Ayrshire cattle. In the early 2000s, as he began downsizing, Bruce Mode switched over to Holsteins. In September of 2018, just a few months after the sudden passing of his beloved wife Susan, Mode made the decision to sell off the last of his cattle, ending almost two centuries of dairy farming on the property. The couple raised four daughters – Shauna, Kerri, Heidi and Kelsey – but Mode says he found it difficult to keep up with dairy farming and now was not the right time for any of the four to take over the property.

“None of them are really into farming except Kelsey – she probably would have taken over here, except she married a farmer,” Mode laughs. “That’s the reason I got out of it – there was nobody left to farm here.”

“Hopefully when I’m gone my kids will keep it going. They may not farm it, but I hope some of the family is going to stay here.”

Mode says that at 68, he is happy to still live and work at Bonnie Brae, without the stress of taking care of his dairy cattle 12 months of the year.

“Now I just cash crop, but it is still a working farm. I don’t have to worry about going out in the winter when it’s 30 below and doing chores. I did that for 45 years, so that was long enough.”

With his extra free time, the semi-retired farmer loves to fish and spend time at the family’s cottage in Western Quebec. He says he does not miss the long days of full-time dairy farming, but still enjoys working on the property and taking care of his crops.

“As long as I’m healthy and able to do it I’ll continue – I still have to make some money,” Mode chuckles, before becoming serious about his decades working at Bonnie Brae.

“Farming is not an easy way of life,” the sixth-generation farmer notes. “You don’t get rich farming.”

“Farmers are worth a lot of money in what they have, but you don’t have any money in your pocket.” 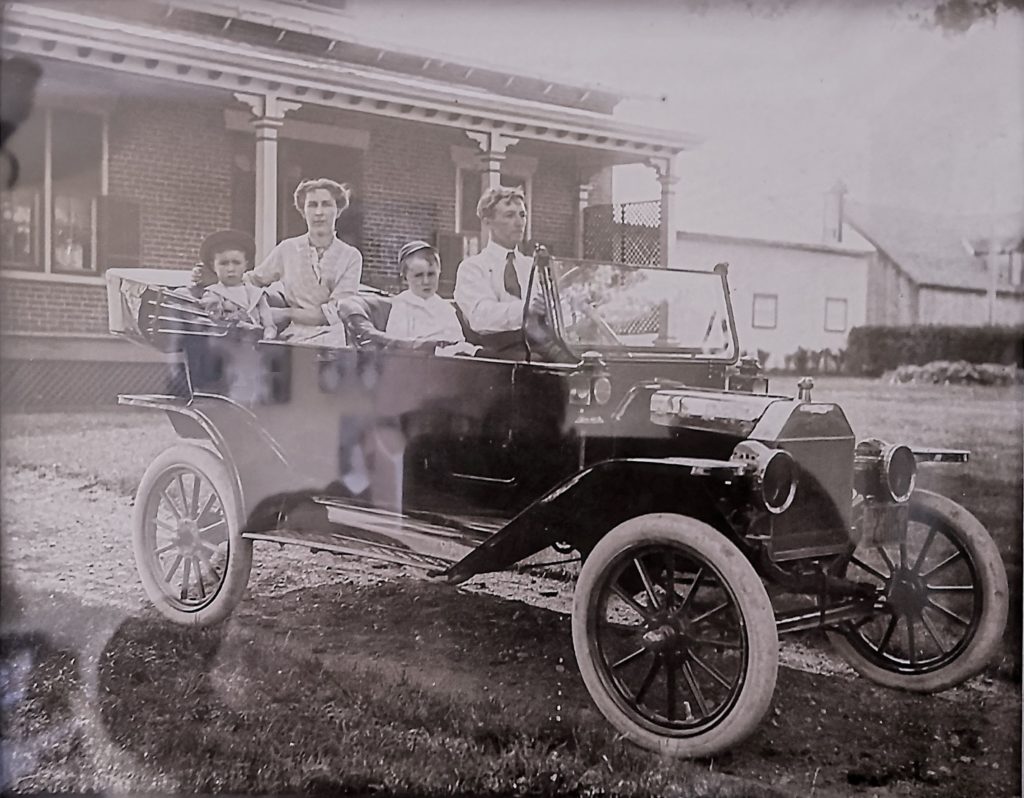 A photo of Bruce Mode’s grandparents, father Sydney and aunt taken in the 1920s in front of the historic property and farmhouse. 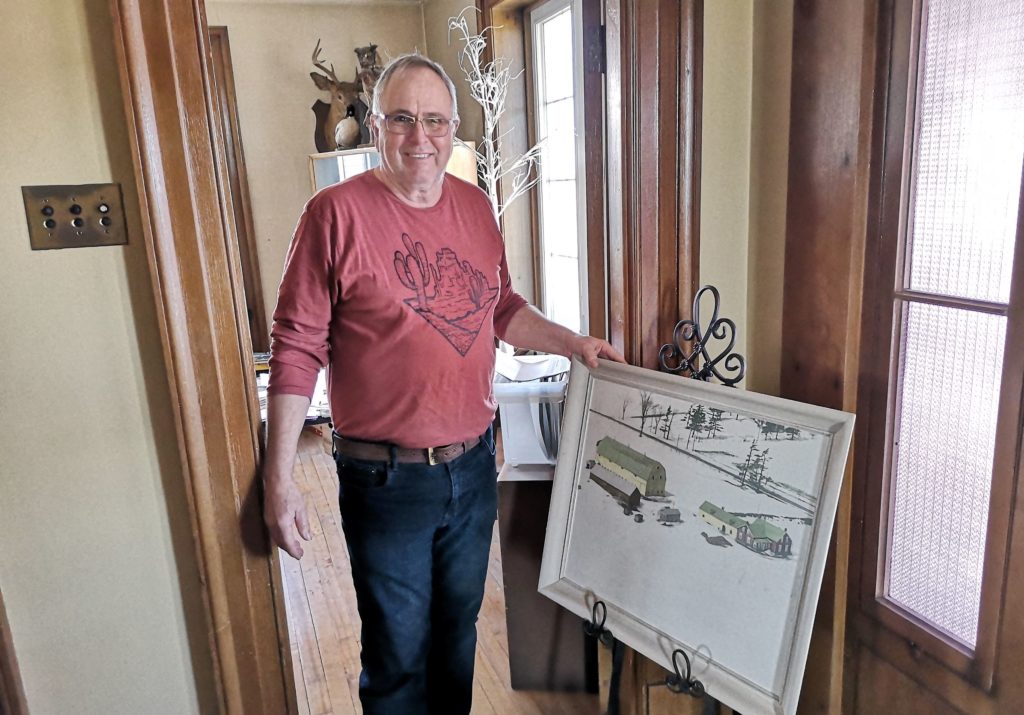