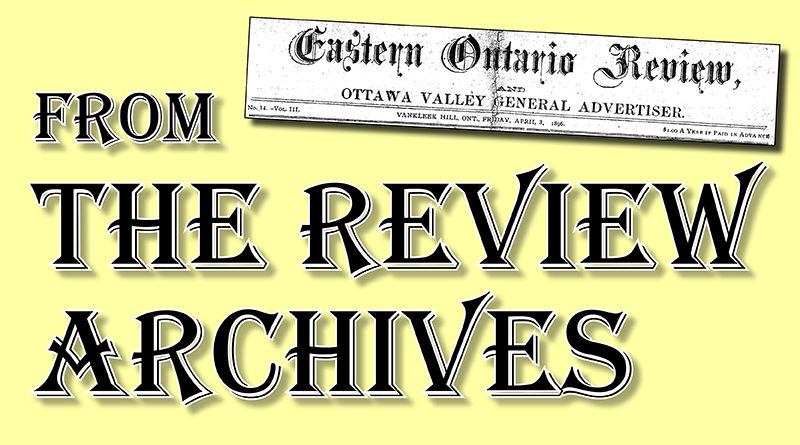 10 Years ago
Local producers to open livestock market
The Review, February 23, 2011 – Local producers will breathe new life into the old hog producer’s building at the corner of Highway 7 and McCrimmon’s Corner this spring. Penny’s Livestock and Produce Market will officially open its doors in April.

25 Years Ago
Epidemic hits L’Orignal school
The Review, February 28, 1996 – The Eastern Ontario Health Unit is awaiting test results to confirm the cause of a disease which hit Ecole St-Jean-Baptiste in L’Orignal recently. On one day, about 30 per cent of the school’s 400 pupils were ill. The children were suffering from symptoms which included fever, sore throat and aching muscles. Most recovered from the malady in a few days.

50 Years Ago
Quigley Cheese Plant forced to close
The Review, February 24, 1971 – Close down, said the Ontario Milk Marketing Board, Thursday night at the annual meeting of the Quigley Cheese Manufacturing Association, its board of directors was given permission to negotiate the sale of the cheese plant ‘to a going concern’. Six years ago the plant was built with a $60,000 government grant. Today, the government will give the association a $37,000 grant if it closes the plant.

75 Years Ago
Mode Farm celebrates 125th year
The Review, February 21, 1946 – Those listening Sunday mornings to Andy Clark relating his tales of long-established farms will be interested in the following. The Mode Farm near Vankleek Hill, better known to livestock men as ‘Bonnie Brae’ has been in the Mode name for 125 years, having been acquired by Geo. Mode, the great, great grandfather of the present youngest generation. Today the farm is owned and operated by G.D Mode & Son (Sydney) and is modern in every way, with one of Ontario’s largest dairy barns built 20 years ago.

100 Years Ago
121 cases of smallpox in Ottawa
The Review, February 25, 1921 – Latest returns from Provincial Superior Board of Health inspectors show that from February 19 to 21, out of 2100 passengers coming from Ottawa 1782 produced certificates, 134 were vaccinated on trains, 281 were passed on visual inspection and two refused to comply and were sent back. From February 1 to 17, 121 cases of smallpox were reported in Ottawa. No further cases have been reported in Montreal and district and the three cases in hospital are progressing satisfactorily.

125 Years Ago
Two road accidents in Vankleek Hill
The Review, February 28, 1896 – The smooth, slippery condition of the roads has been responsible for a couple of runaways this week. On Monday while the young son of Mr. S. Mooney was driving Capt. Ogden’s horse the sleigh upset at the corner of High and Main streets and the horse ran away, but was stopped before much damage was done. The Misses Cheney, Bate and Keough were driving on Wednesday afternoon and turning from Main to Jay Street when the cutter upset, unceremoniously dumping the occupants into a snowbank, but fortunately they escaped without injury, but not so the pony, which after running about a hundred yards fell and inflicted an ugly gash on its leg.