All municipalities under EOHU jurisdiction will be under the Ontario government`s Orange-Restrict designation for COVID-19 control effective at 12:01 a.m. on Monday, December 14 due to the recent steady increase of cases across the territory.

EOHU Medical Officer of Health Dr. Paul Roumeliotis said on Friday that the total numbers are more indicative of a red zone, but the various sources of infection allow the EOHU territory to still be classified as an orange zone.

“I’m a bit discouraged we’re in orange,” said Roumeliotis.  However, he noted that the situation parallels trends being seen in other parts of Ontario, Canada, and the world.

COVID-19 cases in schools under EOHU jurisdiction have increased during the past week.  As of Friday, the most significant school outbreak was at the Al-Rashid Islamic Institute, a religious boarding school at the eastern edge of Cornwall on Highway 2 where 43 people in a school dormitory had tested positive for COVID-19.  Roumeliotis said on Friday that they do not yet know how the outbreak originated but it may have been due a contact outside the school that a staff member had.

There were also COVID-19 cases at the following schools under EOHU jurisdiction as of December 11.  Two or more cases in a school is an official outbreak, unless otherwise stated.  The source of the numbers is from information provided by school boards and the Ontario government list which is updated daily.

One individual at Glengarry District High School in Alexandria

One student at Mother Theresa Catholic Elementary School in Russell

As of December 11, the COVID-19 outbreak at the Prescott and Russell Residence in Hawkesbury remained in effect, but there had been no recent changes to the case numbers.  COVID-19 cases remained active in nine residents and one staff member as of Friday.

COVID-19 outbreaks were also in effect as of December 11 at The Palace Long Term Care in Alexandria, Heritage Heights in Cornwall, at St. Joseph’s Continuing Care (Quinn House) in Cornwall, Royal Manor Rest Home in Cornwall, and Parisien Manor in Cornwall.  There is also a COVID-19 outbreak at the Tsiionkwanonhso:te Long-Term Care facility in the Canadian portion of the Akwesasne first nation.

The Ministry reported that 116,432 or 85.2 per cent of cumulative cases were resolved as of Thursday.  Resolved cases do not include deaths.

There were 808 COVID-19 patients in hospital across Ontario as of December 10.  Out of those 808 patients, 235 were in intensive care, and 124 patients were on ventilators.

There had been 3,916 deaths due to COVID-19 across Ontario as of December 10, comprising 2.9 per cent of all cumulative cases. 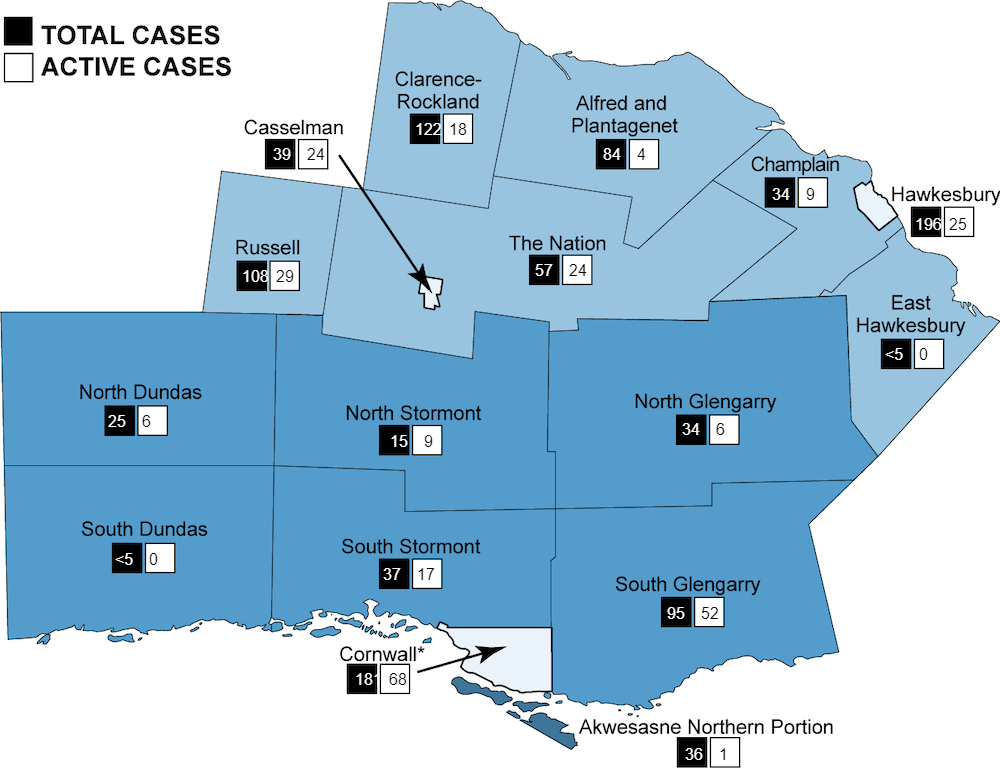