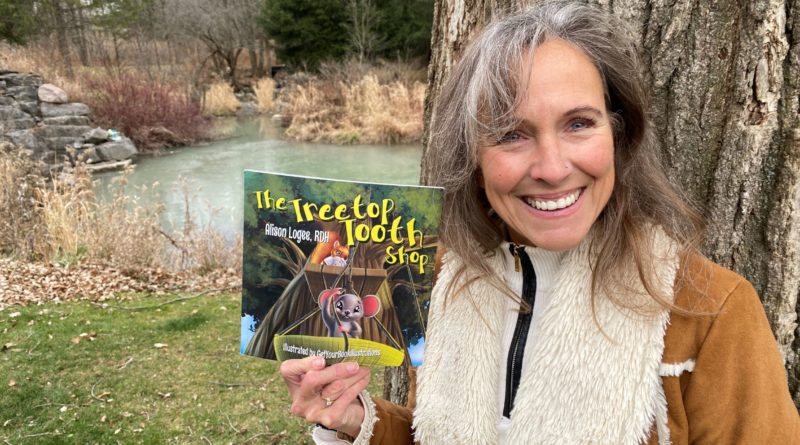 St-Eugène dental hygienist Alison Logee has combined a love of nature and her work into a new children’s book, aimed to both entertain youngsters and teach them proper oral hygiene.

It all started with a special friendship – with a tiny squirrel.

The Treetop Tooth Shop tells the story of little Mousey, who is uncomfortable because his mouth is out of whack. A nervous Mousey goes to the Treetop Tooth Shop to see Miss Chelsea, a red squirrel who is the forest’s dental hygienist. Although a bit annoyed by the young mouse’s antics in the dental chair, a very patient Miss Chelsea takes the time to show Mousey the proper way to care for his teeth and gums.

The characters in the book are based on real animals that Logee has cared for in her St-Eugène home – Mousey being inspired by a small mouse who Logee rescued several years ago. But the true inspiration for the book is Chelsea, a tiny red squirrel who Logee first met while out for a walk on her country property on a beautiful late August day in 2013.

“I nearly stepped on her,” remembers the avid nature lover, who took the tiny creature into her home and nursed what she thought was a baby chipmunk back to health through bottle feeding and constant care.

It was not until a few weeks later, as the newly-christened Chelsea grew, that her rescuer realized the young creature was actually a red squirrel. From there, the relationship between human and squirrel evolved quickly.

“I had her in a bin on the floor in the bedroom, but then when her eyes at four weeks opened up, all of a sudden I would find her on my pillow at night,” Logee relates. “I’d wake up and she’d be beside me – just sitting. Then after a while she started sleeping with me, either at my neck or my feet.”

By late September, Logee was taking Chelsea outdoors in her cage to allow her to get used to the sounds of other animals. While outdoors one morning in early October, Logee let Chelsea out of her cage and the 11-week-old squirrel quickly scurried up a large oak tree on the property.

But the story does not end there. Chelsea made a home in a nearby tree and has been living on the property and visiting with her rescuer on an almost-daily basis for the past seven years. Now a senior citizen in the squirrel world, Chelsea has raised dozens of litters and many of her offspring also live on the property. She and Logee continue to maintain a special friendship.

“It’s very interesting to sit with her, she talks to me,” says Logee, who has posted literally hundreds of photos, videos and stories of Chelsea on her personal Facebook page over the past seven years.

Many who have already purchased copies of The Treetop Tooth Shop, are people who have come to know Chelsea through Logee’s Facebook posts and have told her how much they love the book. But the author – who wrote the rhyming story both to entertain and teach proper dental hygiene to young readers – is particularly thrilled by the reaction from parents.

“The coolest thing is some parents have been sending me little videos, or quotes of what their kids are saying,” laughs Logee, who owns Dental Hygiene Wellness Centre in St-Eugène. “One of those was ‘I didn’t have to ask him to brush his teeth at all. He was so happy and he asked me to read the book again in the morning’.”

The busy writer, who has written several other unpublished books featuring Chelsea – some of them children’s stories and others describing their unique relationship – was originally not planning to write anything dental-related.

“I definitely did not start off to write anything dental – not at all,” she remembers. “But this one just happened.”

“I think it comes from what a lot of people say to me about what’s happening in their mouths and what I say to them. One day I thought it would be fun to put these things in a book, because when adults are reading it to their children, it can really relate to them too.”

As a red squirrel, Chelsea has already exceeded the expected lifespan of her species. Logee feared the worst when her longtime friend disappeared this past September, just days after the book illustrations had been completed. Chelsea was gone for two months, but in early November, Logee was thrilled to see a familiar sight.

“All I saw was her tail at first. I called and called and finally she came to me,” says Logee of the happy reunion. “She even let me rub her tummy.”

You can read the entire story of Chelsea’s disappearance and the reunion as written by Logee here.

Artwork for The Treetop Tooth Shop was created by Get Your Book Illustrations. While it took some time to get her vision of the characters correct, Logee is very pleased with the artwork in the book.

“It came to exactly what I envisioned,” the author says. “It was overall an amazing experience and I learned a lot.”

Anyone wishing to order a copy of The Treetop Tooth Shop can visit the author’s webpage Alison Logee.