Everything on the Table: Memoirs of home care visits, hard-working people and treasured recipes 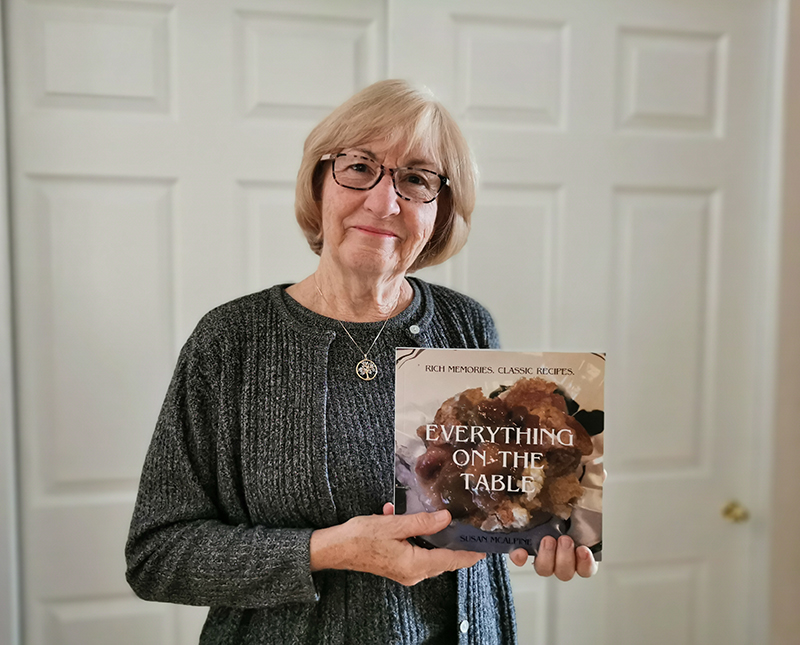 The thread of memories is inextricably a part of Susan McAlpine’s new book, called “Everything on the Table.”

McAlpine had listened to many stories during her years as a travelling physiotherapist, visiting people in their homes to administer physiotherapy. Not only did she have her share of adventures visiting remote farms in the Laurentian mountains just north of Hawkesbury, but she got a glimpse into people’s lives that she might not have had were she working in an office.

She visited inside their homes and was inside their world for a time, as she helped people overcome injuries or regain strength after surgery. It set the stage for people putting everything on the table, so to speak. McAlpine says that visiting someone at home often gave her a bigger medical picture than an office visit. It was a more global view of the patient — a way to find out exactly what was happening in that person’s life.

It was during short breaks, she says, that people would talk to her and invariably, the talk turned to food. As she cared for her patients, she discovered that food was a universal language. Treats, soups and pickles were shared with her and so were the recipes. She took these home and happily prepared them for her family and notes that even today, certain recipes are associated with certain people she met over the years.

The isolation and quiet of the pandemic presented itself as the perfect time to put her pen to paper, finally telling these stories and assembling the recipes to go with them. And she went one step further during the past months: she prepared and cooked up a storm throughout the pandemic, taking her own photographs of each dish. From her home near Brownsburg, Quebec, she set out on the road again, to take photographs of some of her favourite places in the region; these images are also included in the book.

Beyond the stories and delicious recipes, there is a second theme that weaves itself in and out of her book. And it is an acknowledgement of the uncomplaining endurance – the hard work and hardship that was simply accepted by the generation that preceded her.

“It was just part of how that generation grew up,” McAlpine says, noting that as she helped people with joint problems related to age changes for example, many just accepted that this was how life was.  “It was always a surprise to me that they would take this in their stride, as if it was inevitable.” She compares this attitude to today’s world, where people resist the effects of aging.

To McAlpine, people of that older generation had more resilience and accepted adverse health situations, whereas today, people expect to be well. “And we expect more from medicine today,” McAlpine says.

She may be mindful of the changes in medicine because as a young girl, she had wanted to be a doctor. But she was discouraged on several fronts because that profession, she was advised back then, was not for girls. She subsequently set her sights on a nursing career, but a chance exposure to physiotherapy told her that this career, in which she could help people and get tangible results, was for her.

As you read the series of short stories in the first section of the book, you will share McAlpine’s insights into how these people lived and fed their families in ways more stringent than ours — yet somehow, always with plenty for all. Because she spent most of her career in this region, you can expect a nostalgic look back at the Smith Clinic in Hawkesbury, among other things.

But this book is really paying homage to the generation before us, she says – a generation where meals were not take-out, or prepared at the last minute. Gardening was not a hobby but rather – a serious business to grow food for a family or to “put by” for the winter.

Which brings us to the meat of her book (no pun intended). The recipe section in the second part of the book brings to life exactly what she is talking about. There are recipes for things like Potato Pie, Fresh Pickles, Oven-Fried Chicken with Biscuits, Chicken with Rhubarb, Salmon Cakes, Minced Beef and Nun’s Eggs. What many of the main-course dishes have in common is that these were healthy, nutritious meals prepared on a shoestring budget — often for large families. There is a classic pea soup recipe, the perfect “Cheater’s Cinnamon Buns” and a varied collection of dessert recipes, too – including Depression-Era Wacky Cake, Bread Pudding, Dorothy’s Cherry Chews, Fruit Crisp, Aunt Norma’s Peanut Butter Cookies and much more.

She wants her book to be a tribute to the grit and guts of the people she treated throughout her career. But she also hopes that the recipes themselves rekindle memories and perhaps inspire us return to cherished recipes that may have been set aside over the years. If you have misplaced yours, you can be sure to find some new favourites in “Everything on the Table.”

“Everything on the Table” is available from the author for $24.95. You can email her at: [email protected]

The book will also be available from The Review’s online gift shop, at www.reviewshop.ca where there are curbside, local pick-up choices, or shipping available.