The number of active cases of COVID-19 across the jurisdiction of the Eastern Ontario Health Unit (EOHU) as of Tuesday, October 20 was 152, and that has officials considering if Prescott and Russell, Stormont, Dundas, and Glengarry, and Cornwall should be placed under a modified version of Ontario’s Stage Two measures for businesses and services.

During a media briefing on October 19, EOHU Medical Officer of Health Dr. Paul Roumeliotis said that the region is now experiencing moderate to high levels of weekly case transmission.  Any decision to return to stage two will be made in collaboration between Roumeliotis and the Ontario Ministry of Health.

“If you look at the numbers, we’re there,” said Roumeliotis.

There were COVID-19 cases at seven schools across the EOHU’s territory as of October 20.  All cases were at schools in Clarence-Rockland and Russell Township.  When there are two or more cases at a school, it constitutes an official outbreak.

As of October 20, five COVID-19 patients from the EOHU’s jurisdiction were in hospital, and one patient was in intensive care.

The number of COVID-19 deaths across the EOHU territory as of October 20 was 13.

At the six COVID-19 testing and assessment centres and by paramedics across the EOHU territory, 70,779 COVID-19 tests had been performed as of October 20.

The Ministry reported that 56,606 or 85.9 per cent of cumulative cases were resolved as of October 19.

There were 274 COVID-19 patients in hospital across Ontario as of October 19.  Out of those 274 patients, 72 were in intensive care, and 45 patients were on ventilators.

There had been 3,053 deaths due to COVID-19 across Ontario as of October 19, composing 4.6 per cent of all cumulative cases.

Active COVID-19 cases by municipality under EOHU jurisdiction as of Tuesday, October 20, 2020. 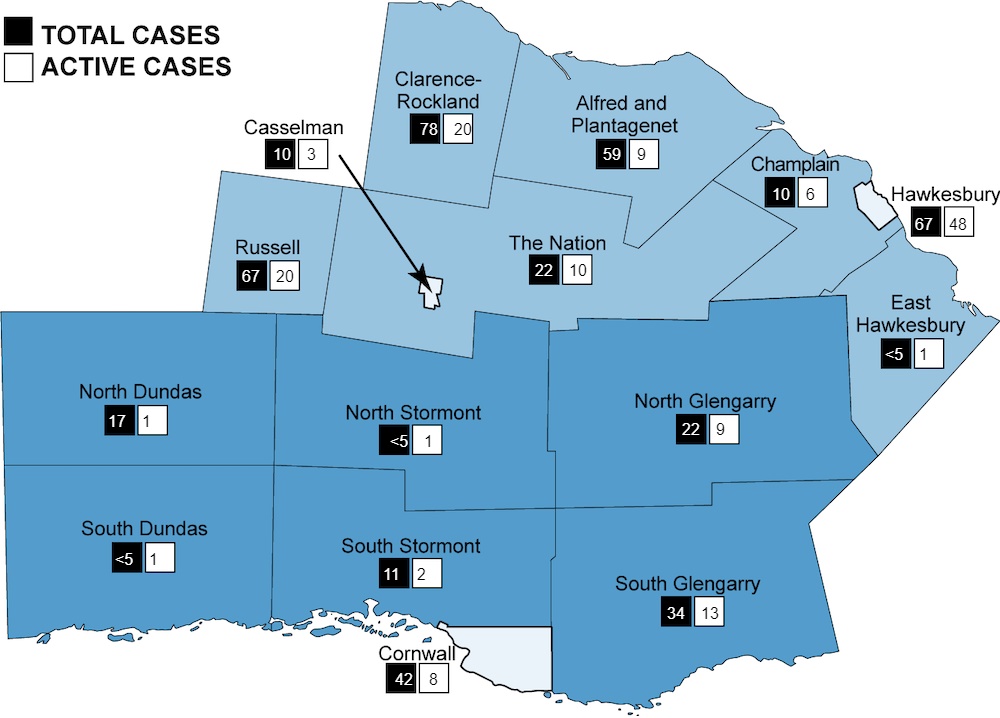