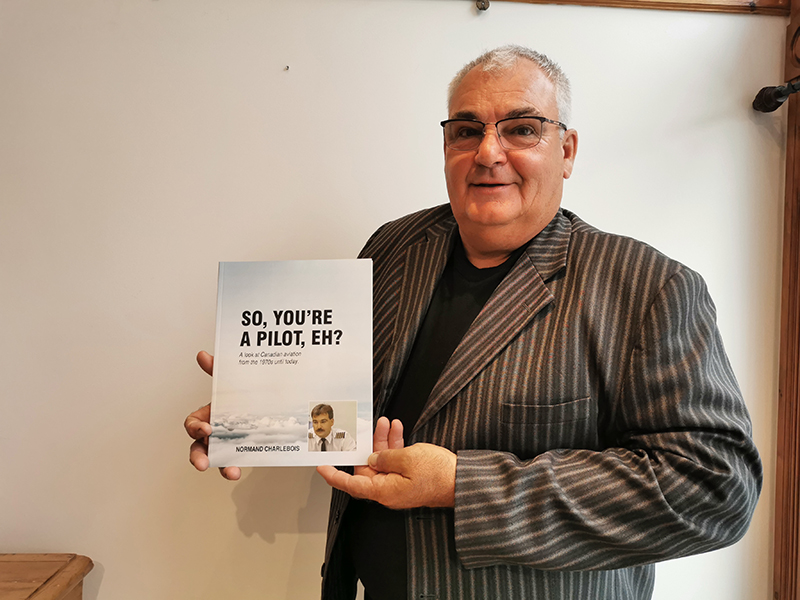 Normand Charlebois is seen here with his newly-published book called, “So You’re a Pilot, Eh?” There is a link to purchase the book online or obtain a copy locally at the end of the story.

One doesn’t have to speak with Normand Charlebois for very long to know he absolutely loves to fly.

The veteran pilot has flown for airlines all across Canada and one could fill a book with his narratives about flying to the North Pole and all the different aircraft he has piloted. It is something that was not lost on Charlebois himself, or to people who have listened to him speak about his experiences.

In his new book So, you’re a pilot, eh, the L’Orignal resident relates numerous tales of his years in the pilot’s seat – soaring over Canada’s Arctic, other parts of the country and around the world. The title of the book also comes from personal experience, as over the years Charlebois has been asked to tell stories about his time in aviation whenever someone he met found out he is a pilot. And when he would relate one of his adventures, someone would inevitably say “you should write a book!”.

“The idea of the book started when we did a cruise ship tour and at supper you’re sitting with people you don’t know and after a glass of wine you start telling your Arctic stories,” Charlebois says. “People are interested to listen to them because for them it’s an adventure almost. That’s how the idea of writing a book came – it was more for entertainment than anything else.”

Charlebois began working on his aviation biography two years ago, shortly after he retired on his 60th birthday. While he says prior to retiring he had never really considered the idea, the subject of a book about his experiences had come up at times over the years – most notably after he was able to have the chance to pilot a Boeing 747, which he still considers to be the greatest moment of his career.

“Sometimes when I was out talking with friends I used to say ‘if I ever write a book, (flying the 747) will be the first chapter’,” the veteran pilot recalls. “To me the Boeing 747 will remain the biggest airplane I ever flew. I didn’t fly it for long, but it is a nice airplane – when you hit turbulence you barely felt it.”

A good portion of Charlebois’ writing deals with his time spent in the Arctic as a commercial pilot for First Air, where he got to fly such legendary planes as the de Havilland Twin Otter and vintage Douglas DC-3 aircraft – planes often featured on the television show ‘Ice Pilots’.

“I always said that if I had a Sunday airplane to go flying it would be a DC-3,” Charlebois reminisces, adding that the steep angle of fuselage of the DC-3 when on the ground made it difficult to load back in his commercial flying days. “Working on those was hard, but if I had an airplane it would be fun to fly a DC-3.”

His time spent flying in the Arctic remains very dear to Charlebois and is the source of most of the individual stories in his book. Much of the area still remains unpopulated to this day, which communicates a feeling of adventure and exploration.

“The whole section about the North – which is almost half the book – is probably the section that I cherish the most,” he says, relating a story about flying a Twin Otter equipped with extremely low pressure tires in order to be able land and then almost float over snow or soft tundra. “To me you would get off the airplane and no one had stepped on that piece of earth before, so this was an adventure in itself.”

While flying over the frozen tundra was an amazing experience, there were numerous challenges faced by pilots in the North – not the least of which was the lack of communication available in the vast, isolated territory.

“One of the things that hit me when I started to fly routes like Ottawa and Boston was that you’re talking to a controller all the way,” comments Charlebois, who worked for First Air out of Montreal and thus was able to continue living in the L’Orignal area while flying all over Nunavut and the Northwest Territories. “Up north there was nobody to talk to. It’s always nice to have somebody watching out for you and that’s what I found when I (started flying) back down south – you have air traffic control to watch out for you.”

A big challenge in writing a publication which covers decades of memories is in remembering all the details, places and dates. As he was never seriously thinking about an eventual book during his commercial aviation days, Charlebois did not write down his experiences for that purpose, but he had one huge advantage over potential authors working in other fields – pilots keep log books. Charlebois still has the records of all his flights and once he started going through them, the notations brought back a flood of memories, as well as providing accurate dates and times for particular events.

“My memory is good, but very short,” he laughs when asked if all of the book comes from his personal recollections. “I have log books for all my time flown and yes I kept track of all the hours that I flew. I wasn’t putting a lot of comments in the log book itself, but it tweaks your memory. I would indicate if there was an engine failure or a fire, but those ones you usually remember pretty well.”

All of those memories and many more can be read in detail in Charlebois’s book ‘So, you’re a pilot, eh’, which is now available for purchase. Order a copy here.

If you live in the Vankleek Hill area, you can order a copy and arrange for safe pick-up by emailing The Review, which has several copies in stock. Send an email to: [email protected]