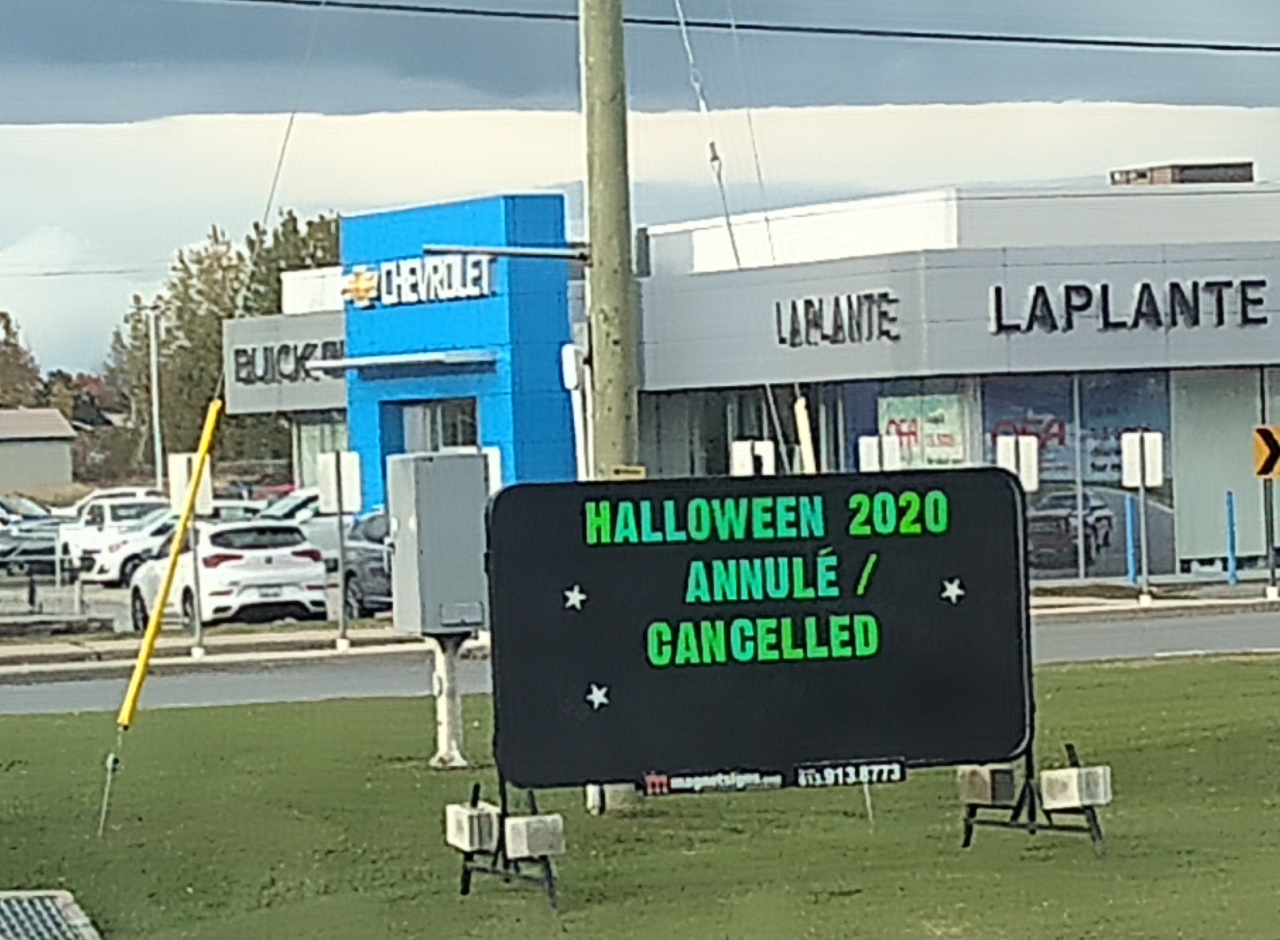 A sign indicating that Halloween is cancelled this year on Principale Street in Casselman. Photo: Sylvain Lauwers.

Casselman will be a town without Halloween this year.

On October 13, the municipal council decided that trick-or-treating would be canceled within the municipality on October 31 due to the risks related to COVID-19.  The fire department, which normally does a safety patrol on Halloween, will not be making the rounds this year either.

Casselman Mayor Daniel Lafleur said that council’s support for the motion was unanimous.  He said the decision was made to protect elderly people and children.

According to Lafleur, issues that council was uncertain if adults and children would maintain proper physical distancing and if children would be wearing protective masks in addition to costume masks.

The number of cases of COVID-19 in Casselman has been low.  Lafleur said that the municipality wants to make sure it stays that way.

He said that the municipality is not responsible if there is trick-or-treating happening in Casselman on October 31, but he would prefer if people abided by council’s decision.

“Respect the regulation that we have in place,” said Lafleur.

The Eastern Ontario Health Unit (EOHU) is recommending that residents of Prescott and Russell and Stormont, Dundas, and Glengarry counties not trick-or-treat at all this Halloween due to the increasing amount of cases, and has stated that Halloween parties are completely out of the question.

“It’s not going to be the same Halloween as usual,” EOHU Medical Officer of Health Dr. Paul Roumeliotis said on October 16.

If people do choose to trick-or treat, they should follow a series of measures so it can be done more safely.

The mayors of other Prescott and Russell municipalities were waiting for directions from the EOHU on how Halloween should be celebrated this year.

Champlain Township Mayor Normand Riopel said Halloween had not yet been discussed by council.  He said that the township is awaiting guidelines from the EOHU.

Hawkesbury Mayor Paula Assaly said that the town is also awaiting directives from the health unit.

La Nation Mayor François St-Amour also said there had been no discussion by council on the status of Halloween in the municipality.  He did note that the St-Isidore firefighters will not be making their usual Halloween security patrol in the village this year.

Alfred and Plantagenet Mayor Stéphane Sarrazin said that he does not think deciding on if Halloween festivities should be cancelled is up to the municipality, and that it is the responsibility of the health unit.  However, he did say that council will be discussing the issue.

However, as of October 19, the Dunvegan Recreation Association and Glengarry Pioneer Museum are still planning to hold their by-appointment only Spooktacular Halloween Scavenger Hunt.  It takes place on October 31 from noon until 4 p.m. at the Glengarry Pioneer Museum in Dunvegan.  To reserve, go to the museum’s Facebook page or call 613-525-9664 or 613-987-7151.  The event has been organized using advice and guidance from the EOHU.