The CISSS des Laurentides regional health authority confirmed on October 13 that there were 18 active cases of COVID-19 among residents of the MRC d’Argenteuil.  The number of active cases in Argenteuil had been at 14 on October 9 when statistics were last made available before the holiday weekend.  The cumulative case count for Argenteuil is now at 155.

The most recent active case per municipality figures for Argenteuil are from October 8.  As of that date, there were one to four active cases in each of the nine Argenteuil municipalities except for Gore, Harrington, and Wentworth.

As of October 13, cases of COVID-19 remained in effect at Seminaire du Sacré-Coeur in Pointe-au-chêne/Grenville-sur-la-Rouge.  No other confirmed cases of COVID-19 among students or staff at any other public or private schools in the MRC d’Argenteuil were listed by the Québec education ministry as of Tuesday.

The MRC d’Argenteuil remained as an orange zone under Québec’s regional COVID-19 alert system as of October 13, although parts of the Laurentides region are red zones.  To the east, the neighbouring MRC’s of Deux-Montagnes, Mirabel, and Rivière-du-Nord are red zones.  The Vaudreuil-Soulanges MRC was also a red zone.  To help contain the spread of COVID-19, residents of red zones should not be traveling outside of their region.  To the west, The MRC de Papineau is an orange zone, but the city of Gatineau and surrounding MRC des Collines-de-l’Outaouais are red zones.

There were 457 COVID-19 patients in hospital across Québec as of October 12, and 75 of those patients were in intensive care. 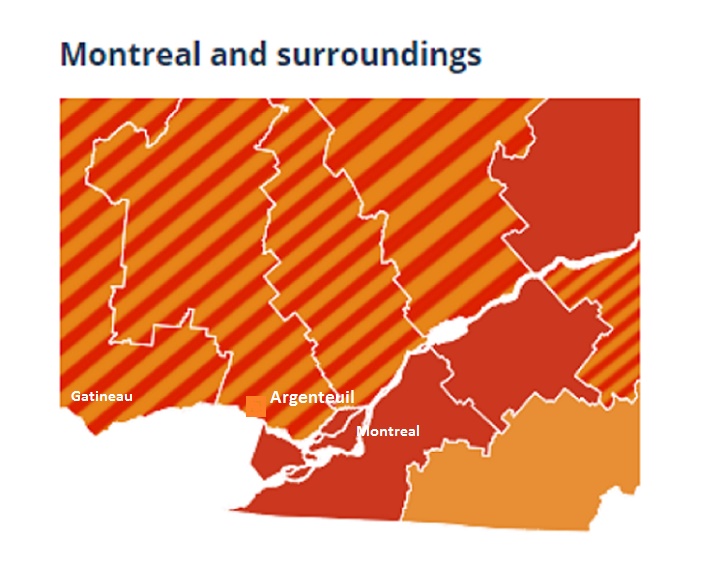