There were four schools with cases of COVID-19 under the jurisdiction of the Eastern Ontario Health Unit (EOHU) as of Friday, October 2.

During his media briefing on Thursday, October 1, EOHU Medical Officer of Health Dr. Paul Roumeliotis said that contact tracing was taking place for all cases.  Parents at all schools were notified, but there had been no cancellation of classes.

Two COVID-19 outbreaks at long-term care facilities under EOHU jurisdiction remained in effect as of October 2.  They are at the Foyer St-Jacques facility in Embrun and Résidence d’Érablière in Limoges.

Roumeliotis confirmed on October 1 that there had been two cases among employees at the Walmart distribution centre in Cornwall.  However, neither case was considered to be a serious risk to other employees and the facility remained open.

Cases of COVID-19 continue to increase in the City of Ottawa, which borders the EOHU’s territory.  Roumeliotis said on Thursday that if Ottawa reverts to stage two of the Ontario government’s system of restrictions and measures to contain COVID-19, he will support having the EOHU included due to the connections between the two jurisdictions.  He noted that the EOHU’s territory is on a list of the top 30 COVID-19 risk areas across Ontario.

Roumeliotis said that residents of red zones on Québec’s COVID-19 regional alert system should not be leaving their home region and travelling to Ontario as tourists, shoppers, or for social events.

As of Friday, October 2, there were 57 active cases of COVID-19 across the jurisdiction of the Eastern Ontario Health Unit (EOHU) and the number of cumulative cases was 274.  Out of that amount, 205 cases were officially resolved.  With active cases, the City of Clarence-Rockland had the highest amount in the region, followed by the Township of South Glengarry with 12 active cases, and Russell Township with 11 active cases.  There were seven active cases in La Nation Municipality as of October.

There were two active cases of COVID-19 in Alfred and Plantagenet Township as of October 2 and one active case each in the Town of Hawkesbury, Township of North Glengarry, and Municipality of Casselman.

There were no active cases in Champlain Township or in East Hawkesbury Township as of October 2.

The number of COVID-19 deaths across the EOHU territory as of October 2 remained unchanged at 12.

As of October 2, 60,456 people had been tested for COVID-19 across the EOHU territory since the beginning of the pandemic.

On October 2, Ontario Minister of Health Christine Elliott announced that effective immediately, all COVID-19 testing in the province was to be by appointment only in order to reduce the demand and long wait times.  On October 1, Roumeliotis said he was hoping that COVID-19 test results for teachers awaiting a return to work would be prioritized but that the laboratory in Ottawa which receives most test specimens from across the EOHU was overwhelmed with work to do.

The Ontario Ministry of Health had recorded a cumulative 52,980 cases of COVID-19 as of October 1, which was an increase of 732 cases or 1.4 per cent from September 30. The Ministry also reported that, 44,850 or 85 per cent of those cases were resolved, which means that 8,130 cases were active across Ontario as of October 1.

There were 167 COVID-19 patients were in hospital across Ontario on October 1.  Out of those 137 patients, 38 were in intensive care, and 21 patients were on ventilators.

Active and resolved cases across Eastern Ontario Health Unit by municipality, as of October 2, 2020. 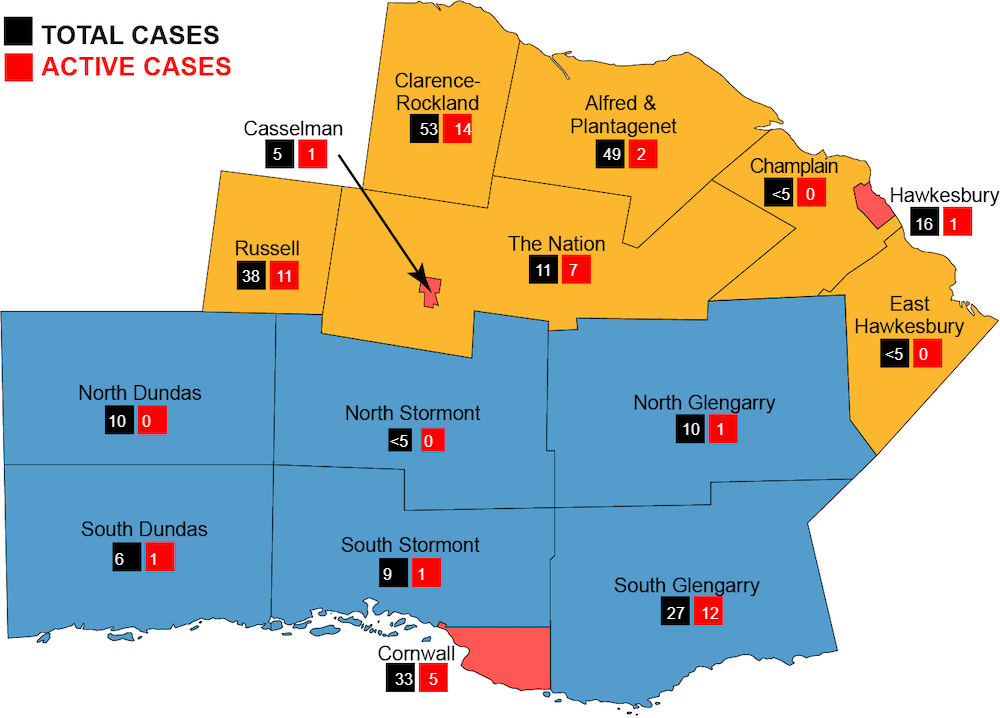