There were two active cases of COVID-19 in Alfred and Plantagenet Township as of September 29 and one active case each in the Town of Hawkesbury and the Township of North Glengarry.

There were no active cases in Champlain Township or in East Hawkesbury Township as of September 29.

One COVID-19 outbreak was declared at the Résidence d’Érablière in Limoges during the previous weekend.  No other long-term care or other institutional outbreaks were in effect as of September 29.

The only school under EOHU jurisdiction with confirmed cases of COVID-19 as of September 29 were École élémentaire catholique Embrun-Pavillon St-Jean.  A previous case at École secondaire catholique L’Escale in Rockland is now resolved.

The number of COVID-19 deaths across the EOHU territory as of September 29 remained unchanged at 12.

As of September 29, 57,909 people had been tested for COVID-19 across the EOHU territory since the beginning of the pandemic.  According to EOHU Medical Officer of Health Dr. Paul Roumeliotis, the rate of positivity is currently approximately one per cent, but increased testing will likely lead to more confirmed cases being discovered.

On Thursday, September 24, a new drive-through COVID-19 testing and assessment centre opened in the parking lot of Calypso water park in Limoges.  It was opened to relieve the long lines and traffic jams at the Casselman testing facility.  As of September 28, 15,825 people had been tested at the Casselman location and 1,862 people had been tested at the new Calypso facility.  Roumeliotis said that the Casselman facility will eventually be closed and the Calypso location will be adapted to serve drive-through testing during the winter months.

According to Roumeliotis, the majority of the recently confirmed cases under EOHU jurisdiction are in patients under 40 years of age and more active cases are symptomatic.

There were 137 COVID-19 patients were in hospital across Ontario on September 28.  Out of those 137 patients, 30 were in intensive care, and 16 patients were on ventilators.

Active and cumulative cases across EOHU jurisdiction as of Tuesday, September 29, 2020. 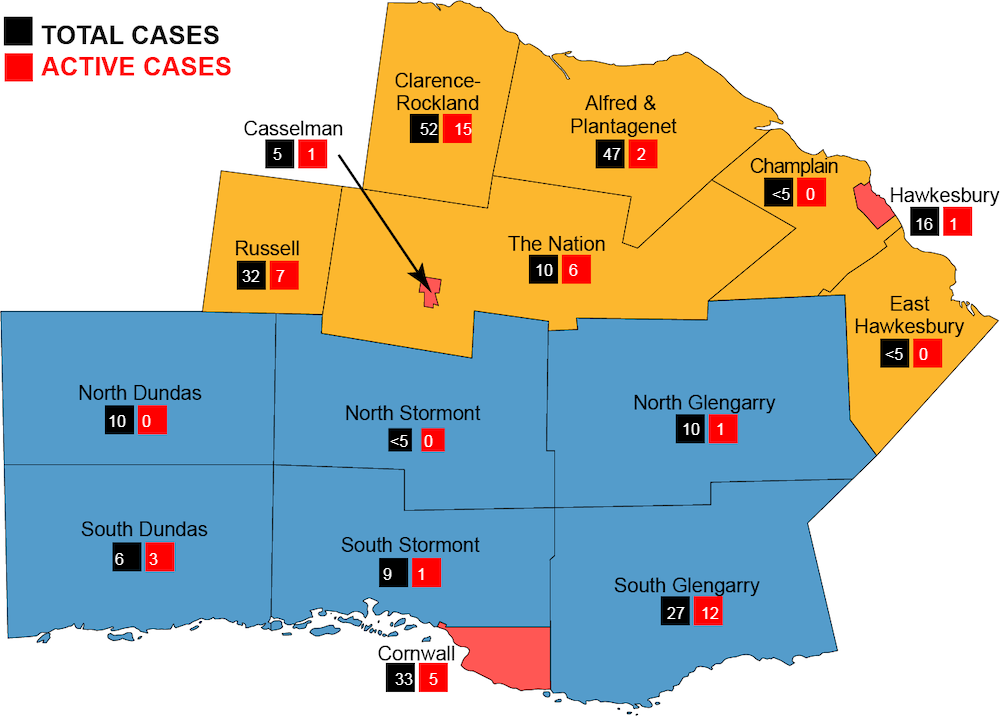