An outbreak of COVID-19 has been confirmed in an employee at a grocery store in Alexandria.  According to the Loblaw Companies Limited website, the employee at Chartrand`s Independent Grocer tested positive on September 6, and has not been at work since August 29.

The store remained open as of Tuesday, September 8 and had been thoroughly disinfected on September 4 and 5.  When there are COVID-19 cases in employees of a retail store, the Eastern Ontario Health Unit (EOHU) traces the contacts the individual had and then determines which measures need to be taken, and it does not mean that stores must close.

One institutional COVID-19 outbreak within the EOHU`s jurisdiction remained in effect as of September 8 at Dundas Manor in Winchester.  The outbreak at Auberge Plein Soleil in Alfred ended on September 4.

The number of active cases of COVID-19 across the EOHU’s jurisdiction was at 20 on Tuesday, September 8.  The number of cumulative cases was 203, with most new cases being in the Township of North Glengarry and the City of Clarence-Rockland.

As of September 8, there were no active cases in Champlain Township, East Hawkesbury Township, and the Municipality of Casselman.

As of September 8, 42,750 tests for COVID-19 had been done at the six testing and assessment centres across the EOHU territory, and by paramedics.

The number of COVID-19 patients from the jurisdiction of the EOHU in hospital as of September 8 was zero.

The Ontario Ministry of Health had recorded a cumulative 43,536 as of Monday, September 7, which was an increase of 850 confirmed cases since Wednesday, September 2.  However, 39,196 or 90 per cent of those cases were resolved, which means that 4,340 cases were active across Ontario as of September 7.

There were 54 COVID-19 patients were in hospital across Ontario on September 7.  Out of those 54 patients, 17 were in intensive care, and 7 patients were on ventilators.

Cumulative and active cases of COVID-19 across EOHU jurisdiction as of Tuesday, September 8, 2020. 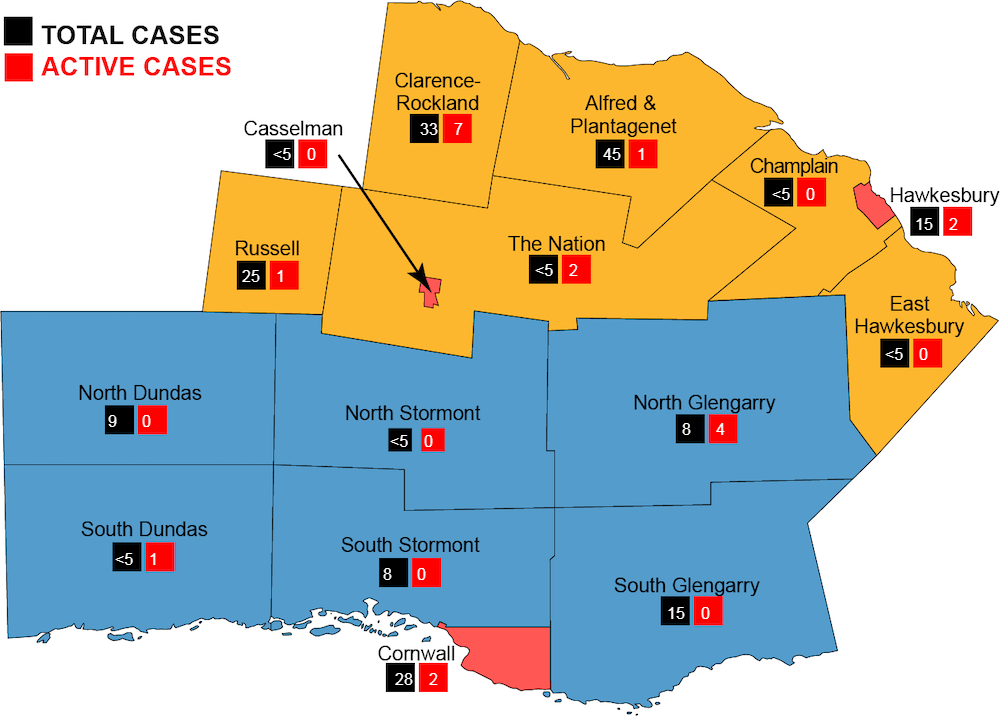