The number of active cases of COVID-19 across the jurisdiction of the Eastern Ontario Health Unit has increased in recent days, reflecting a trend being seen in other jurisdictions across Ontario and Québec.

The EOHU has begun reporting the number of cumulative and active cases of COVID-19 in each of the 17 municipalities across its jurisdiction.

As of September 1, there were no active cases in Champlain Township, East Hawkesbury Township, North Glengarry Township, and the Municipality of Casselman.

There were two COVID-19 outbreaks in effect at long-term care and retirement facilities across the EOHU`s territory as of September 1.  They are at Auberge Plein Soleil in Alfred and Dundas Manor in Winchester.  A previous outbreak at the Valoris Group home on Russell Road in Clarence-Rockland ended on August 28.

As of September 1, 40,899 tests for COVID-19 had been done at the six testing and assessment centres across the EOHU territory, and by paramedics.

The number of COVID-19 patients from the jurisdiction of the EOHU in hospital as of September 1 was zero.

For 13 weeks, the number of deaths due to COVID-19 within the EOHU’s jurisdiction has remained unchanged at 11.

The Ontario Ministry of Health had recorded a cumulative 42,421 confirmed cases of COVID-19 across the province as of Tuesday, September 1.  However, 38,369 or 90.4 per cent of those cases were resolved, which means that 4,052 cases were active across Ontario.

There were 65 COVID-19 patients in hospital across Ontario on September 1.  Out of those 65 patients, 17 were in intensive care, and 5 patients were on ventilators.

Cumulative and active cases of COVID-19 in municipalities under EOHU jurisdiction as of Tuesday, September 1, 2020 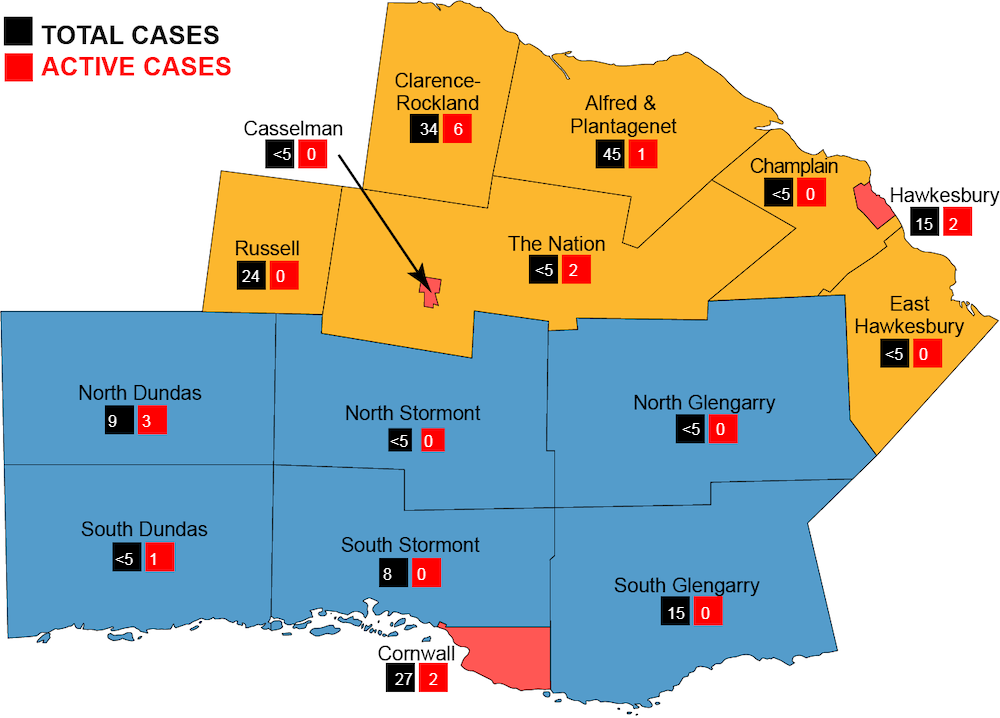