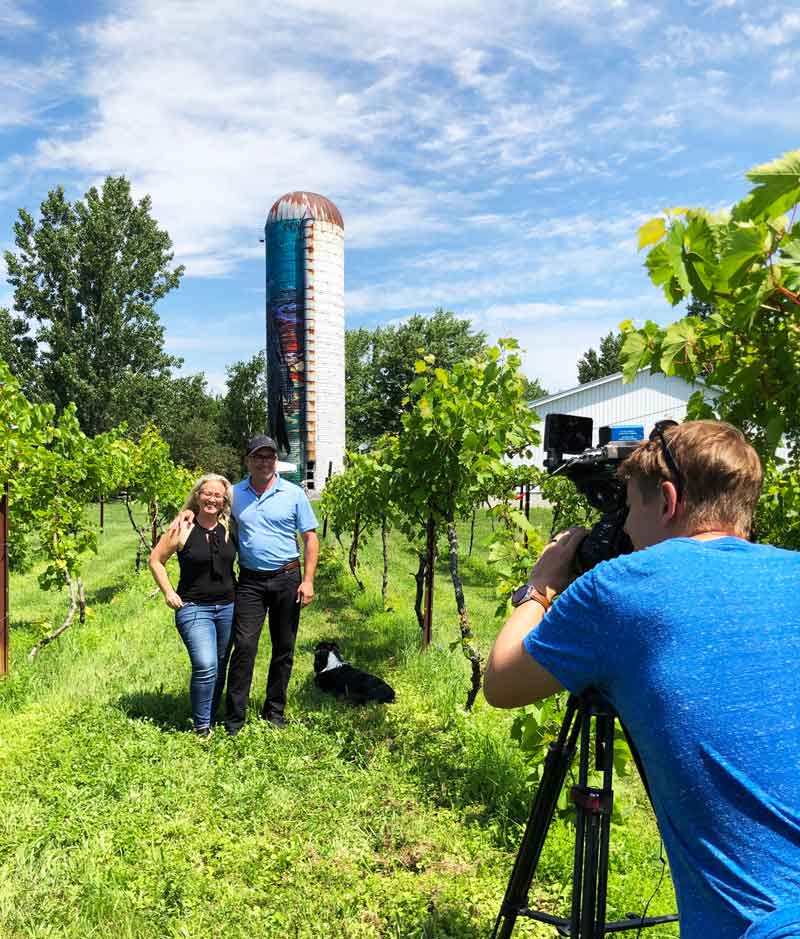 Vankleek Hill Vineyard owners Teresa Bressan and Scott Lambert were filmed recently as the vineyard was one of four destinations featured in a promotional video about Prescott-Russell. The video/promotion project was paid for by TPRT and the United Counties of Prescott and Russell.

The United Counties of Prescott and Russell (UCPR) and Tourism Prescott Russell Tourism (TPRT) have announced the launch this week of a new partnership with Bell Media and CTV to promote agriculture and agri-tourism in the region.

This regional partnership came together under the banner of “Fields to Forks,” a multimedia-integrated campaign celebrating the agriculture industry – a cornerstone of the economy in Prescott and Russell and a vital element across Eastern Ontario.

“Fields to Forks has allowed us to create wonderful partnerships with the industry, including the farmers, manufacturers and distributors who love what they do – and do it right here in our communities,” explained Mandi Fields, Associate Manager of Brand Partnerships with Bell Media, and creator of the Fields to Forks initiative.

The campaign, produced by Bell Media, will air on CTV Ottawa (television) and Pure Country 94 (radio) from August 24 to October 4, and will feature several agri-tourism businesses through a series of vignettes, in addition to a weekly feature story on CTV Morning Live, every Thursday.

“Bringing together the UCPR and TPRT for this campaign was an obvious choice, given the importance of agriculture and the incredible growth and development of agri-tourism farms and businesses across the region,” added Pierre Leroux, Warden of the UCPR. “Any initiatives to support our businesses, especially during these difficult times, is always a top priority.”

“We are simply thrilled about the opportunity to bring this widespread exposure to the incredible businesses operating right here in our region, and encourage locals and visitors from inside and outside the region to spend time visiting and learning more about their operations,” noted Audrey Lizotte, President of the TPRT Board of Directors.

The cost of the campaign was $19,000; that cost is being shared equally by the United Counties of Prescott and Russell and TPRT.