On Monday, August 24, EOHU Medical Officer of Health Dr. Paul Roumeliotis said that one of two current outbreaks is at the Auberge Plein Soleil retirement home in Alfred.  An employee at the home has tested positive but no residents were symptomatic as of August 24.  All residents and staff at Auberge Plein Soleil were tested for COVID-19 during the previous weekend.

A second COVID-19 outbreak remained in effect at the Valoris Group Home, located at 211 Russell Road in Clarence-Rockland.  That outbreak also resulted from an employee who tested positive for COVID-19.

The EOHU reported 189 cumulative cases of COVID-19 across its territory since the beginning of the pandemic, as of Tuesday, August 25.  That was an increase of four cases from Thursday, August 20.  Out of the 189 confirmed cases, 168 were considered resolved.

“We still have cases, we can`t be complacent,“ said Roumeliotis.

There were no COVID-19 patients from the jurisdiction of the EOHU in hospital as of August 25.

For 12 weeks, the number of deaths due to COVID-19 within the EOHU’s jurisdiction has remained unchanged at 11.  All of the deaths were the result of an outbreak in May at a long-term care facility in Plantagenet.

As of August 25, 37,707 people had been tested at all six COVID-19 testing and assessment centres located across the EOHU’s area of jurisdiction. The facilities are in Hawkesbury, Alexandria, Casselman, Rockland, Cornwall, and Winchester.  Paramedics are also providing home testing for people who cannot visit one of the testing and assessment centres.

During the previous week, the EOHU, and the United Counties of Prescott and Russell (UCPR) indicated that the pandemic State of Emergency that had been jointly declared with the United Counties of Stormont, Dundas, and Glengarry (SD & G) and the City of Cornwall would soon be lifted.  However, Roumeliotis said he met with UCPR Warden Pierre Leroux, SD & G Warden Frank Prevost, and Cornwall Mayor Bernadette Clement and it was decided to keep the State of Emergency in effect due to concerns about how the COVID-19 situation could evolve during the fall season, and because the Ontario government recently extended most of its pandemic-related emergency orders.

This week, the EOHU is developing a new method of reporting where confirmed, active COVID-19 cases are located throughout its jurisdiction.  Roumeliotis said that in the beginning of the pandemic, he was reluctant to disclose the municipalities or communities where cases were located because he did not want residents of unaffected communities to become complacent and think that the situation was not to be taken seriously.  The new reporting method will provide information according to each municipality and will indicate an approximate number of cases per municipality.

Roumeliotis said that there have been COVID-19 cases in all 17 municipalities within the EOHU`s jurisdiction since the pandemic began.

As of Monday, August 24, the Ontario Ministry of Health had recorded a cumulative 41,607 confirmed cases of COVID-19 across the province.  However, 37,748 or 90.7 per cent of those cases were resolved, which means that 3,859 cases were active across Ontario.

There were 39 COVID-19 patients were in hospital across Ontario on August 24.  Out of those 39 patients, 13 were in intensive care, and 10 patients were on ventilators.

Confirmed, resolved, and active cases of COVID-19 across EOHU jurisdiction as of Tuesday, August 25, 2020. 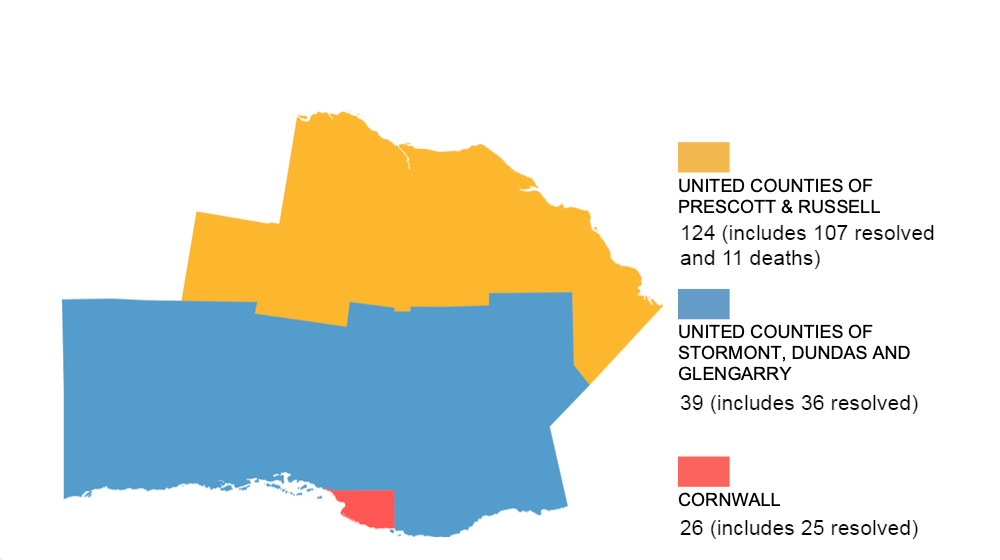