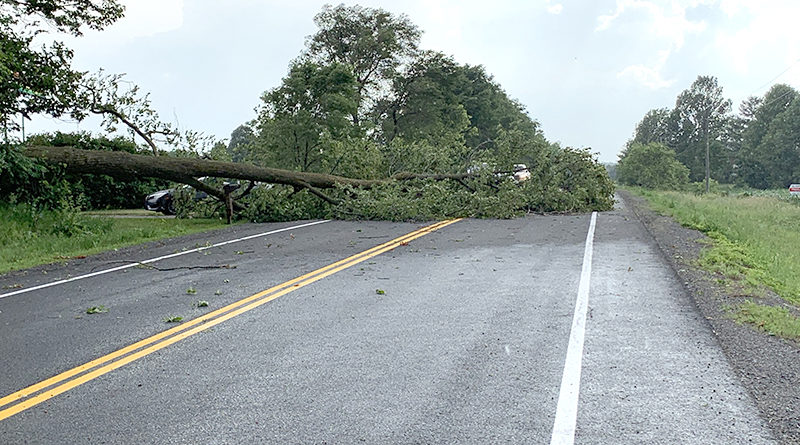 Was it a downburst? Microburst? What about a small tornado?  Nobody knows for sure.  What is for sure, is that a small, but mighty thunderstorm with damaging winds hit Hawkesbury on Friday afternoon.

According to Environment and Climate Change Canada Meteorologist Gerald Cheng, the storm that blew down trees, signs, and swept shingles from roofs throughout Hawkesbury on Friday was not predicted.  No severe weather watches or warnings had been issued.  A chance of afternoon thunderstorms was in Friday’s forecast, but Cheng said that those were more anticipated for the regions immediately east of Georgian Bay and Lake Huron, and not the far eastern reaches of Ontario.  He said that unpredictable summer storm patterns are not uncommon in Ontario.

As of Monday afternoon, Environment Canada did not have sufficient evidence to prove if the storm that hit Hawkesbury was a tornado.  Cheng said that it was being treated as a downburst.  He explained that the difference between a downburst and a microburst is that a microburst is a small, severe storm with a diameter of four kilometres or less.

Most Hydro Hawkesbury customers were without power for several hours on Friday due to the storm.

Manager Michel Poulin said that up to 4,300 of the utility’s 5,500 customers were without electricity during the period between 5 p.m. on Friday to 2 a.m. on Saturday.  Four out of five distribution circuits and the two distribution stations that supply power to the town were affected.  Poulin said that the only circuit not affected was the one serving the downtown area on Main Street, which he attributed to there being fewer large trees in that part of town.

Hawkesbury Fire Chief Daniel Gascon said that 15 firefighters assisted with the response to the storm.  They assisted with cutting some branches, but mostly ensured that the public was not endangered by trees that had fallen on power lines.

Gascon said that there were fortunately no injuries as a result of the storm.