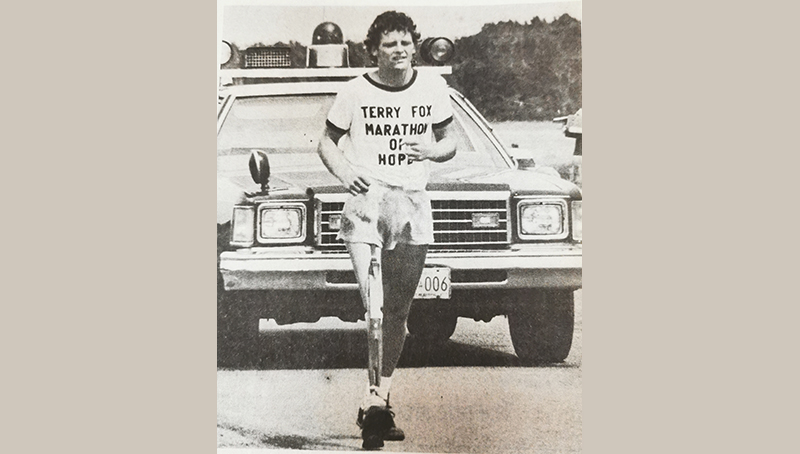 This photograph is from the Review archives. It was originally published in the July 2, 1980 edition of The Review.

It was on June 28, 1980 that Terry Fox arrived in Hawkesbury while running his Marathon of Hope. Greeted by a crowd of 200 people – with a band playing, thousands of balloons on hand, and a banner reading WELCOME TERRY YOU CAN DO IT – the reception was one of the largest Fox had received on his journey, but not a soul on hand had any idea of the national icon the young man was destined to become just a few weeks later. The headline in The Review a few days later – ‘Cancer victim zig zags across country’ – didn’t even mention his name.
The annual Terry Fox Run will take place across Canada on September 20, 2020 as a virtual event due to the COVID-19 pandemic. Since Fox began his run on April 12, 1980 with zero fan-fare and an original goal of raising $1 million, the Terry Fox Foundation has raised more than $750 million towards cancer research. It’s a mind-boggling sum of money that no one could have even conceived of when Fox was hopping and skipping his way over the Perley Bridge, after running across the Atlantic provinces and Quebec with little support and having to avoid angry motorists who had no idea who he was.

“We did a story when he came to Ottawa – I think it made it to page A2 or A3, but it never made the front page,” remembers veteran Canadian journalist and award-winning MacLean’s Magazine writer Ken MacQueen, who was only 23 and had just started his journalism career at The Ottawa Citizen when Fox’s Marathon of Hope arrived in Ottawa in the summer of 1980. “He met the Prime Minister – Pierre Trudeau of course at the time – and (Trudeau) really didn’t know who he was. (Fox) was really unknown even then – he didn’t get a lot of traction in Quebec.”

It was not until he arrived in Toronto that Fox’s story suddenly went national – his name and image plastered on the front page of every newspaper in Canada.

“It was in Toronto that he really exploded, because The Toronto Star had a reporter named Leslie Scrivener who had been filing dispatches while Terry was on the road – she’d phone him up from time to time and that brought a lot of attention,” says MacQueen, whose own personal relationship with Terry and the entire Fox family began shortly after the caravan headed north from Toronto.

“The Citizen realized that we had missed the boat a little bit when he was in Ottawa, so they sent me up to Northern Ontario to spend some time with Terry,” recalls MacQueen, who flew into Sudbury to meet Fox just when media attention was starting to slow down. “By then he was out of the limelight again, so I was about the only media reporter following him for about three days. It gave me a very privileged look.”
In addition to the articles he wrote for The Citizen, MacQueen’s experiences during his time with Terry Fox are chronicled in an article he wrote for MacLean’s in 2005, on the 25th anniversary of the Marathon of Hope. Entitled ‘The relentless Terry Fox’, MacQueen’s retrospective on the young man who would later become a Canadian hero has been re-posted several times over the years on the MacLean’s website and can be found Here.

In hindsight, MacQueen believes that Fox already knew his cancer had returned by the time the Marathon of Hope arrived in Sudbury and it was the reason he was so stressed when the two met for the first time.

“I realized later, as did his brother Darryl who was on the run with me at that point, that he was obsessed about the mileage,” MacQueen recalls, citing a specific incident as an example.

“The day that I was first there he had a real blow-up with his friend Doug Alward because they’d missed the halfway point by a few kilometres and it seemed a little obsessive and surprising. We realized later that he may have known something was wrong and that’s why he was working so hard.”

MacQueen’s article, ‘The relentless Terry Fox’ contains some heart-wrenching moments, including one in which he quotes Terry’s mother Betty Fox – who passed away in 2011 – as saying she believed that Fox’s death was preordained in order to fulfill Terry’s dream of raising money towards cancer research.

“Terry was surprisingly deeply religious and his family was to some extent too, so I do believe that they feel this was Terry’s destiny – to achieve greater things by dying than had he carried on,” MacQueen says. “His initial goal of $24 million – which we thought was crazy at the time – was a dollar for every Canadian, but if you look at the website now I think the Terry Fox Run has raised almost $800 million, which is almost beyond belief.”

In addition to his untimely passing, MacQueen believe’s Fox’s legacy is due to the young man’s incredible hard work and integrity – traits he says were carried on by both Fox’s family and the foundation which bears his name. While the amount of money raised over the past 40 years by the Terry Fox Run is staggering, MacQueen says the original foundation for success was built by Terry himself.

“I’m a little bit surprised (by the amount of money raised), but not as surprised as you might think because I saw how hard he worked,” MacQueen replies, when asked if he expected to ever see such numbers when he was covering Fox’s run back in 1980. “In 40-plus years in journalism I’ve never seen anybody work that hard – and I’ve covered nine Olympic Games.”
“But I think the real reason he has endured, is because he did not accept sponsors – he could not be bought – and his family was very protective of his legacy afterwards,” says the veteran journalist, who notes the Fox family refused to accept sponsorship money even after Terry’s death. “There were all sorts of endorsements they could have had where they would have had quick, easy money for a little while, but that would have faded away. (The family) wanted to keep it pure. They wanted the Terry Fox Run, or walk, or bike to be something that embraced every level of society. I think they honestly kept it pure and that’s made a big impression on me and I believe on the donating public.”
With the normal public run being cancelled for 2020, the Terry Fox Run will require more dedication from participants than ever in order to reach its goal of raising funds for cancer research. For more information and to sign up as a participant you can visit the Terry Fox Foundation Here.
After a four-decade career of writing for some of the country’s best newspapers and magazines, MacQueen retired as MacLean’s Vancouver Bureau Chief at the end of 2015 in order to focus on his current career as an author. He recently completed his first book, ‘Writer of Wrongs’, a fictional crime novel. Over his career he covered nine Olympic Games and interviewed literally thousands of famous people, but MacQueen will always consider Terry Fox to be the most amazing person he ever met. The brief time spent with Fox was extremely special and he feels honored to have been able to meet the young man at a critical point in his all-too-brief life’s journey.

“People have asked me who is the most interesting or famous person that you’ve interviewed – who have you talked to that you get really excited about – and the one that still sticks in my mind is Terry Fox,” MacQueen says, noting it is somewhat ironic to have one of his first stories as the highlight of a 40-year writing career. “Did I appreciate that at the time? – probably not – but it came to me quite quickly that this was an exceptional person.”

“Hero is a pretty overused term. You can catch a fly ball, or kick a soccer goal – all these things get described as being heroic, but this truly was heroic. I think he really did sacrifice his health and his life for that run.” 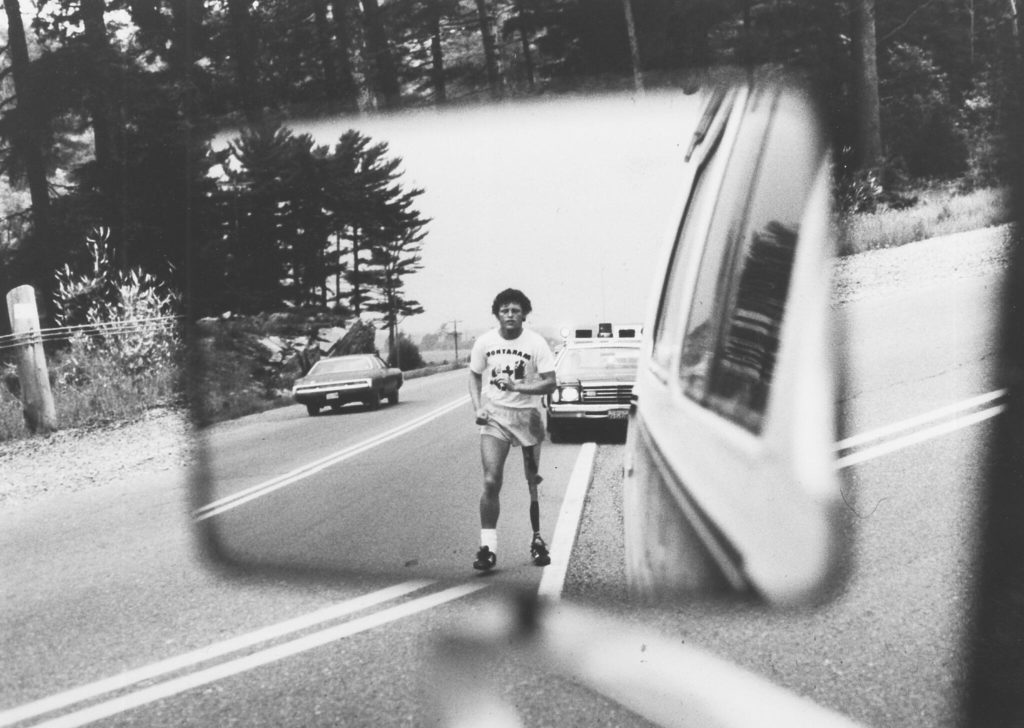 Award-winning Canadian journalist Ken MacQueen shot this iconic photo of Terry Fox back in 1980 from the passenger seat of the Marathon of Hope van while travelling with Fox through Northern Ontario.