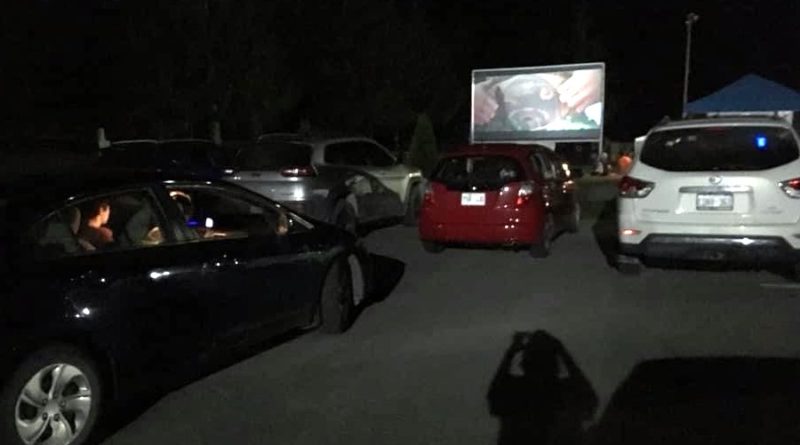 Cars are shown lined up at Alexandria Island Park in 2019 to watch movies shown on the Optimist Club's large outdoor screen. The events are moving to the old Ski-Hi Drive-In theatre site in 2020.

The long-closed Ski-Hi Drive in theatre in Alexandria will be coming back to life on June 20.

A summer series of movies will be shown at the old drive-in this summer, hosted by local non-profit organization MiEV along with the help of Alexandria’s Optimist Club. The film played on June 20 will be ‘Le Coq de St-Victor’ – an animated family comedy which will be shown in its original French-language version as part of a celebration for both National Indigenous People’s Day and St-Jean Baptiste.

MiEV founder Josée Jeaurond said the movies will be shown on a large portable outdoor screen owned by the Optimist Club, which has been used to show drive-in movies at the club’s bi-weekly ‘Social Saturdays’ events for the past four summers at Alexandria’s Island Park. However, with the closure of the park this year due to the COVID-19 pandemic, Jeaurond contacted the owner of the old Ski-Hi Drive-in property to request permission to show the movies at the site which has been closed for more than two decades. MiEV and the Optimist Club plan to again hold bi-weekly movie showings throughout the summer at the old drive-in and the movies will alternate between French and English.

“Because this is a special event (for National Indigenous People’s Day and St-Jean Baptiste) everything is in French for the weekend, but after that we will probably alternate between an English movie and a French movie,” Jeaurond noted. “It will be every second weekend for now, but we might do events in other places such as Lancaster or Maxville.”

MiEV is a non-profit organization started by Jeaurond to raise funds for the local community. Current funds raised are to go to the project to build a new stage for performers at Island Park, which has been without one since the old stage was torn down two years ago. Admission to the drive-in movie showings will be in the form of a voluntary donation of any amount to the organization and will go towards the stage project.

“(The Optimist Club) wanted to build a new stage last year but things didn’t work out, but now it’s kind of perfect timing because they will be able to build it (while the park is shut down due to COVID-19),” Jeaurond noted.

Jeaurond says the movie ‘Le Coq de St-Victor’ was chosen because of the positive message it portrays about villages uniting together and how everyone within a community has a role to play. A reservation to see the film is not needed for the showing on June 20. You can just show up in your car at the old Ski-Hi Drive-In site located at 20651 Glen Robertson Road, make a donation in the amount of your choice and watch the film. The site will open at 7 p.m. with other activities such as music, dance and possibly mini putt preceding the film, which will begin once darkness falls.