Vankleek Hill Business Park: Examining the costs of services and how to move forward 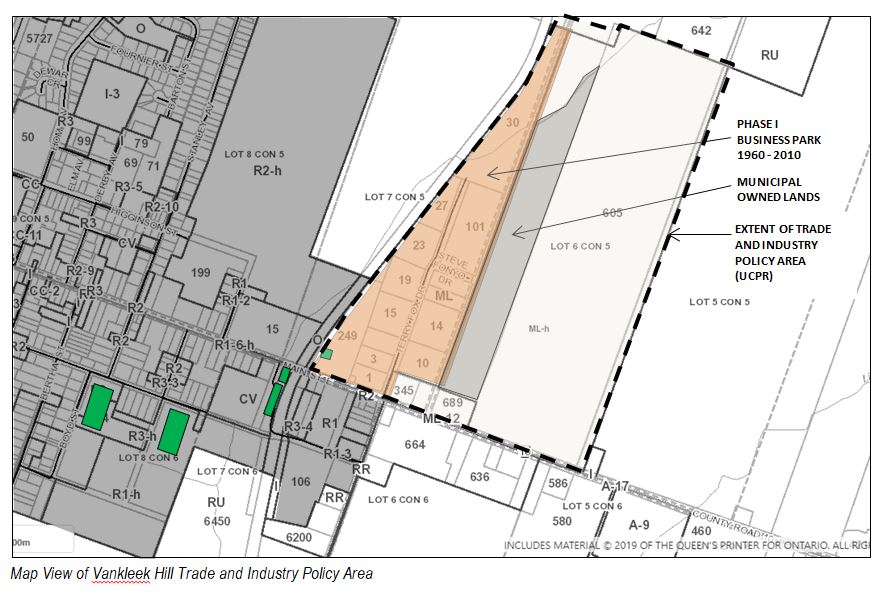 Initial servicing estimates have been received for development of 18.5 acres of land adjacent to the Vankleek Hill Business Park.

Champlain Township purchased 18.5 acres in 2018 at a cost of about $280,000 and is now considering next steps for the unserviced land, previously zoned agricultural but now designated as “industrial holding.”

Estimates for construction and servicing of these lands is between $1.7 million and $2.3 million. Champlain Township Senior Planner Jennifer Laforest said that the township is doing its due diligence and is currently carrying out studies to ensure that the capital expenditures required to service and develop the lands can be justified over a 20, 30 or 40-year period.

The land in question is a strip along the eastern edge of the Vankleek Hill Business Park; in other words, it abuts the existing businesses on the east side of Terry Fox Drive.

But Laforest said development of the lands involves careful consideration as municipal investment should be leveraged to create local employment.

To ensure a direct connection between land development and employment, municipalities typically insert conditions on the sale or transfer of its own industrial lands requiring construction within specified timelines and generally favouring businesses which can demonstrate their proposals yield job creation in the short and long term.  The intent is to keep these lands available for businesses ready to invest and, as much as possible, to remove speculation from this segment of the local land inventory.

Laforest says that many municipalities have carried out similar studies for their employment lands, in some cases relocating them next to highways, railways or transit stations, based on industry needs. Despite its rural appeal, Laforest says that one can notice a clustering trend among Champlain Township’s businesses. She noted that there has been a trend of transportation industries along Highway 34 and County Road 17. Retail and support services continue to be located on Main Streets and near Village Core areas. There has also been a notable update in agricultural processing in the Vankleek Hill area and growth regionally in warehousing and distribution sectors. The community has also witnessed growth in the hospitality sector, which locally is comprised of events, restaurants and bed and breakfasts. These trends were witnessed prior to the onset of COVID-19.

“A distribution centre might not need the full services, or could be using private services,” said Laforest, adding that these are things to be considered.

Maybe the land costs are low, notes Laforest, but municipal services are just as expensive to install here as anywhere, which often means, that with the relatively low cost of land, that it is more difficult to achieve cost recovery, she says.

“The question here isn’t just about the cost of services and cost recovery, but really, about understanding the needs of growth industries, creating opportunities for these industries locally,” Laforest commented, adding that if such an investment takes place in the Vankleek Hill ward, council and administration will want to ensure that other areas in Champlain Township are also given similar consideration for employment growth. To that end, a consultant will be hired to do a land development exercise and to gain an understanding of market needs and to provide an independent market outlook for the council.

With the future of the controversial cement plant near L’Orignal still undecided (a double LPAT (formerly known as the OMB)  hearing is scheduled for September 2020 with the case being made for and against the plant), Laforest said that if that plant goes ahead, there could be a demand for related businesses nearby, including offices.

Hawkesbury, she says, has done a great job attracting manufacturers because of its traditional employment base.  She believes that there is a future in this region for agricultural processing — and food production and processing seems to have moved up the list for local priorities since the pandemic was declared in Canada in March of this year.