Local nurses return to work to help out during COVID-19

The Eastern Ontario Health Unit (EOHU) has some extra help against the Covid-19 pandemic in the form of several previously-retired nurses who have returned to work to provide extra support in the fight against the virus.

Across Canada thousands of retired health care workers have answered the call to assist in fighting the pandemic. While for some the choice to return to work may have been difficult, for two local residents, it was an easy decision to make.

“I honestly felt an inner call, in the sense you could see how (the pandemic) was building,” says Dawn MacDuff of Vankleek Hill, a Queen’s University Bachelor of Nursing Science graduate and Registered Nurse.

A statement from the World Health Organization in late March which forecast that the Covid-19 pandemic could last 18 months was a major trigger, according to MacDuff, who says, “That statement at that moment really struck me.”

When she received a call from the EOHU inquiring if she would be available to return to work just a few days after seeing the statement from WHO, MacDuff didn’t hesitate in confirming her availability. “I thought if I can help out in any way that would be a good thing.”

MacDuff had worked at the health unit in Alexandria from 1984 until her retirement in 2017, capping a 33-year career which included working at both the Hawkesbury General Hospital and the Smith Clinic. Her first day back was April 20 for orientation and training where she immediately saw some familiar faces among the four retired nurses on hand. One was Margaret MacDonald, who had worked with MacDuff for almost her entire career at the health unit before they both retired. The two have been working together for the Alexandria office of the EOHU for the past month while two other returnees are manning the Casselman office. The close relationship from the past has helped make the adjustment comfortable.

“(Margaret) and I have been of great support to each other because we worked together for over 30 years,” MacDuff notes.

The pair have been extremely busy over the past month, working several days a week from their homes handling calls put in to the EOHU’s health telephone line and responding to Covid-19 inquiries. It’s a service that is very much needed and appreciated by both the health unit and the public, says MacDonald.

“Many people (who call in) are frightened by what is going on and they really need proper information and guidance. We can offer reassurance and explanations,” she said.

MacDonald, who lives just outside of Green Valley, had also heard of the need for retired nurses to return to work. However, unlike MacDuff, she was not contacted by the EOHU because MacDonald did not appear on the active nurses list, her license having expired in September of 2019. But she contacted the health unit to let them know she was available and then applied to have her license renewed. Due to the pandemic, the license renewal process was simpler than usual.

“The College of Nurses made it very easy to get out renewed licenses (due to Covid-19),” MacDonald says. “The process was very quick and the fees were waived.”

With her license in hand, MacDonald was very happy to return to work. “I am very happy to be back. I feel like I can contribute and I can be doing something. I just am fortunate enough to be in a position to help out.”

With the returned retirees able to perform services such as manning the health lines while working from home, health units and hospitals have been able to free up staff from those jobs to perform other duties such as Covid-19 testing. The extra staff also means that regular full-time staff can receive occasional days off despite the increased workload. Both MacDonald and MacDuff say staff at the Health Unit have been very welcoming and appreciative of the extra help. There have also been a few jokes and fun times with the return.

“I’ve been called a newbie by some people and a legend by others,” laughs MacDuff, who notes the staff at the health unit have been both friendly and accommodating of the individual schedules of each of the returning retirees. “I give them my availability and they work around it. They’ve been wonderful.”

Her new position with the health unit has also allowed MacDuff to view first hand the benefits of all of the local groups such as the food banks and Meals on Wheels and the services they offer while also co-ordinating with each other. She notes the same thing about local residents and their response to Covid-19 using the example of Facebook support pages and others which provide entertainment for people stuck at home.

“I am so proud of my home community,” MacDuff beams. “It is so amazing to see all of the people and organizations in Vankleek Hill coming together to do things and provide support.”

While both are enjoying their work, MacDuff and MacDonald say they previously had no plans to return to nursing. That the opportunity presented itself and the circumstances which caused it came as a complete surprise.

“I never imagined anything like this could happen,” says MacDonald. 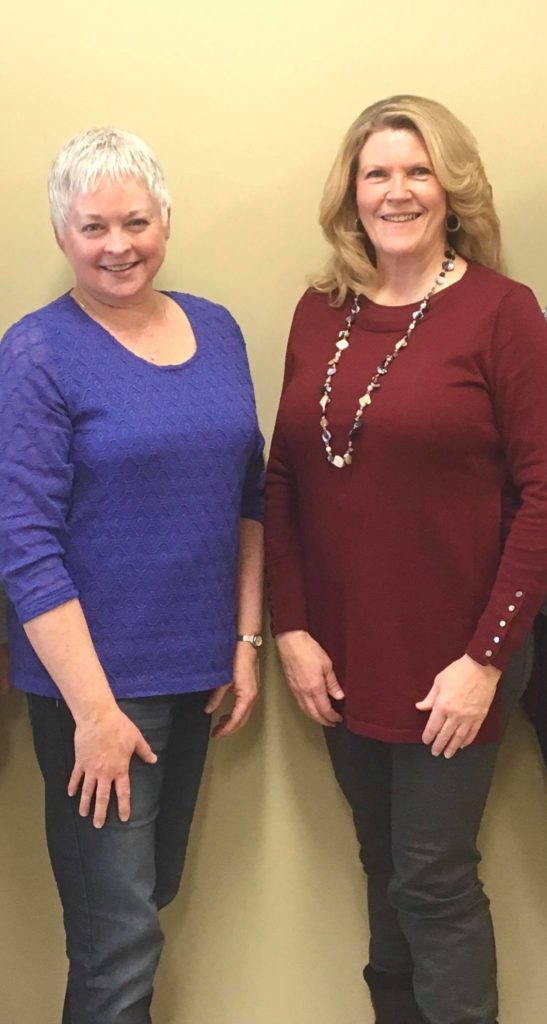