54 active COVID-19 cases across Prescott and Russell on May 26, testing now available for all residents

The number of confirmed cases of COVID-19 within the jurisdiction of the Eastern Ontario Health Unit (EOHU) on Tuesday, May 26 remained at 144 for the third day.

The number of deaths due to COVID-19 in the jurisdiction of the Eastern Ontario Health Unit (EOHU) reached 11 on Sunday, May 24 and the total had not changed as of Tuesday, May 26.  According to the Ontario Ministry of Health, the death occurred in a resident of the Pinecrest Nursing Home in Plantagenet, where the previous 10 deaths in the EOHU’s territory have also occurred.

Roumeliotis said that the most recent death of a resident at Pinecrest was not initially believed to be from COVID-19, but further investigation revealed that it was.

As of May 26, COVID-19 outbreaks remain in effect at two long-term care facilities within the EOHU’s jurisdiction.  Those facilities are Pinecrest Nursing Home and Maxville Manor. The EOHU considers even one case of COVID-19 in an institutional facility to be an outbreak.

The coronavirus, NOT COVID-19 outbreaks at the Prescott-Russell Residence in Hawkesbury, and at Foyer St-Jacques in Embrun are now resolved.

COVID-19 testing is now open to all residents of the EOHU territory, even if they do not have symptoms of the illness.  As of May 26, 7,831 people had been tested by the EOHU and paramedics. The total does not include people who were tested for COVID-19 at hospital emergency rooms.

Roumeliotis explained on Tuesday that since testing has been permitted to all residents, the number of tests performed has increased significantly at the five testing and assessment centres the EOHU has opened throughout its territory.  As an example, he said that the Hawkesbury facility performed 70 tests on Monday, May 25, and its average for the previous week had been 18 to 20 tests per day.

Across Ontario on May 26, there were 848 COVID-19 patients in hospital.  Out of that number, 143 patients were in intensive care and 113 patients were on ventilators.

For full COVID-19 information for residents within the Eastern Ontario Health Unit, go to https://eohu.ca/en/covid/covid-19-status-update-for-eohu-region

On Tuesday, Ontario Premier Doug Ford used words like “horrific“ and “heartbreaking“ to describe a report compiled by the Canadian Armed Forces on the conditions military personnel have found in long-term care facilities where they have been called in to assist with COVID-19 outbreaks.  The government has already announced it is establishing an independent commission on long-term care in Ontario due to the many concerns over how patients are being treated and how facilities are being managed.  On May 25, the government announced that it was taking over the management of two long-term care facilities in the Toronto area.

The heat is on

Due to the hot weather the region is experiencing this week, the EOHU is working with municipalities to open cooling centres, if necessary.  Roumeliotis said that any cooling centres will be different than usual because of the need to maintain physical distancing and infection control measures.

Roumeliotis explained that central or window-mounted air conditioners are not known to spread COVID-19 infection.  He added that electric fans are not an infection spreading risk either, unless they are in an intensive care room or operating room in a hospital.

What is open or accessible in Ontario

As of May 26, the Ontario government has authorized the following services or businesses in Ontario to open to the public, provided that public health measures are observed.

Corporations can conduct annual meetings or business meetings online and use electronic signatures.

Restaurants are open, but for take-out or delivery only.

Most municipal parks and recreational trails for hiking and solitary activities.  No contact or team sports are permitted.

The following services and businesses are not accessible to the public or require an appointment:

The remainder of the school year in all publicly-funded schools in Ontario has been cancelled.  Classes will resume in September.

The provincial state of emergency remains in effect until May 29, and is subject to renewal by the legislature.

Service Ontario outlets for driver`s licence and vehicle registration renewal are accessible by appointment only.

All group gatherings are still limited to 10 people or less.

Confirmed cases of COVID-19 within the jurisdiction of the Eastern Ontario Health Unit as of Tuesday, May 26, 2020. 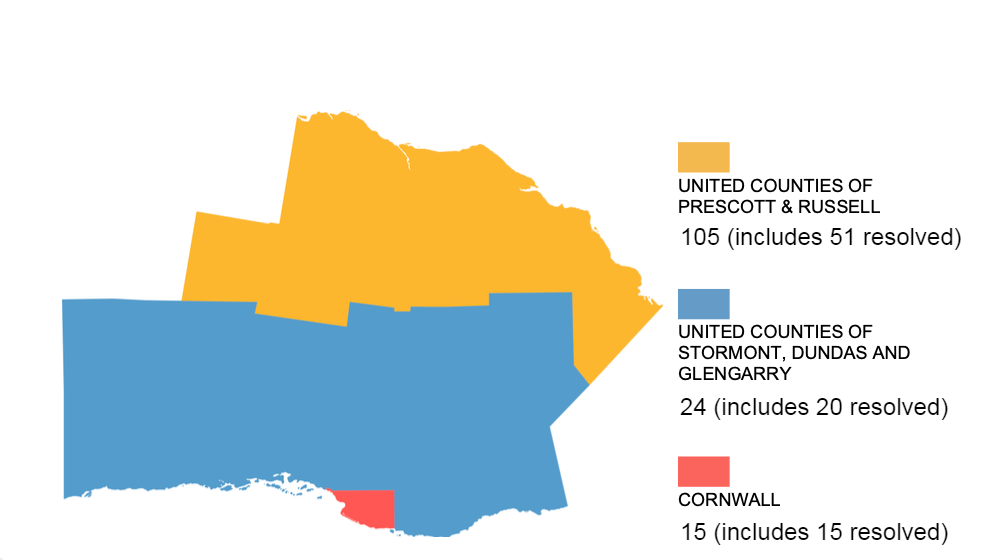