On Thursday, May 7, the total number of confirmed cases of COVID-19 within the jurisdiction of the Eastern Ontario Health Unit (EOHU) was 112.  However, that number included 59 resolved cases so the number of active cases in the EOHU territory was 53.

On Thursday, May 7, the number of outbreaks in long-term care facilities within the EOHU territory remained at two.  There are 23 confirmed cases at the Pinecrest Nursing Home in Plantagenet and two confirmed cases at Woodland Villa in Long Sault, near Cornwall.

In his daily briefing on Thursday, EOHU Medical Officer of Health Dr. Paul Roumeliotis said that the health unit remains on target to complete testing all long-term care facility residents and employees under its jurisdiction by Friday, May 8.

During the weekend ahead, EOHU staff will be creating a complete listing of COVID-19 testing statistics at all of the long-term care facilities which will be posted with the other COVID-19 statistics on the health unit’s website.

In response to a social media comment alleging that residents and employees at Pinecrest Nursing Home were infected with COVID-19 after being tested, Roumeliotis said on Thursday that such an accusation is completely false.

“This is not some kind of conspiracy.  Tests do not cause COVID,” he said.

Roumeliotis explained that testing only indicates if an individual is positive or negative at the time the test is taken, and their condition can change.  He said that it is important for people who have tested negative to not think that they are permanently prevented from becoming sick.

In addition to the tests done at the EOHU centres, paramedics from the United Counties of Prescott and Russell had tested 43 people, and Cornwall-SD & G paramedics had tested 75 people at their homes for COVID-19 as of May 7.

The testing figures for the EOHU centres and home tests by paramedics do not include the tests done of residents and staff at long-term care facilities, or at local hospitals.

On Thursday, May 7, the Ontario government announced that public hospitals will again be allowed to resume surgeries and treatements that had been postponed or cancelled due to the COVID-19 emergency.  Roumeliotis said that the extent to which each hospital can resume various services will depend on their ability to do so.  For example, if hospital staff are assisting with COVID-19 outbreaks at local long-term care facilities, the hospital may not resume normal services as quickly if a large number of its employees are assisting with long-term care outbreaks.

Some staff from Hawkesbury and District General Hospital have been assisting with the COVID-19 outbreak situation at Pinecrest Nursing Home in Plantagenet.

According to Roumeliotis, hospitals will resume surgeries and procedures for high-priority patients and illnesses.  He used cancer and cardiac patients as examples.

Across Ontario on May 7, there were 1,0332 COVID-19 patients in hospital.  Out of that number, 220 patients were in intensive care and 155 patients were on ventilators.

As of Thursday, there had been 1,477 deaths due to COVID-19 across Ontario, which was an increase from 1,429 deaths on Wednesday. 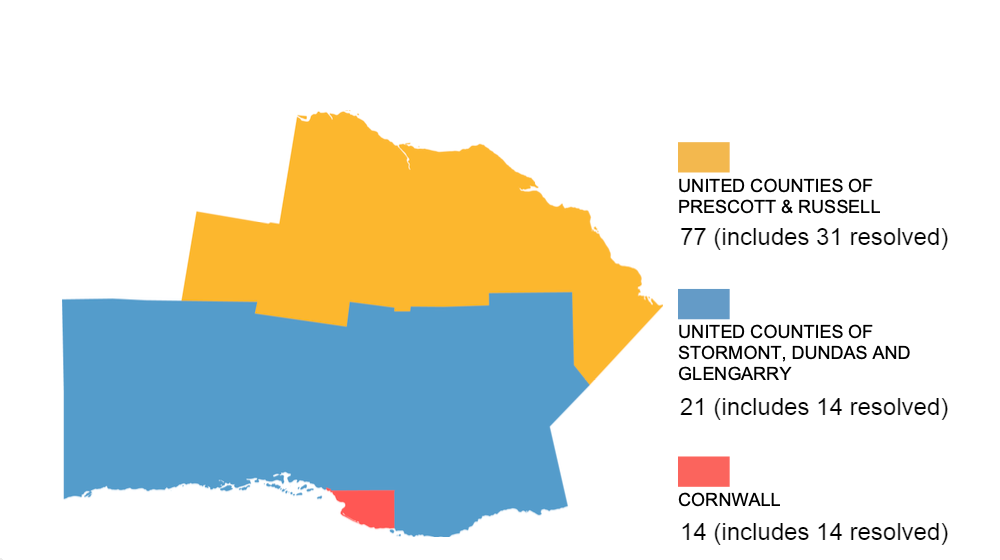 To see the entire EOHU daily briefing for Thursday, May 7, 2020, click here: