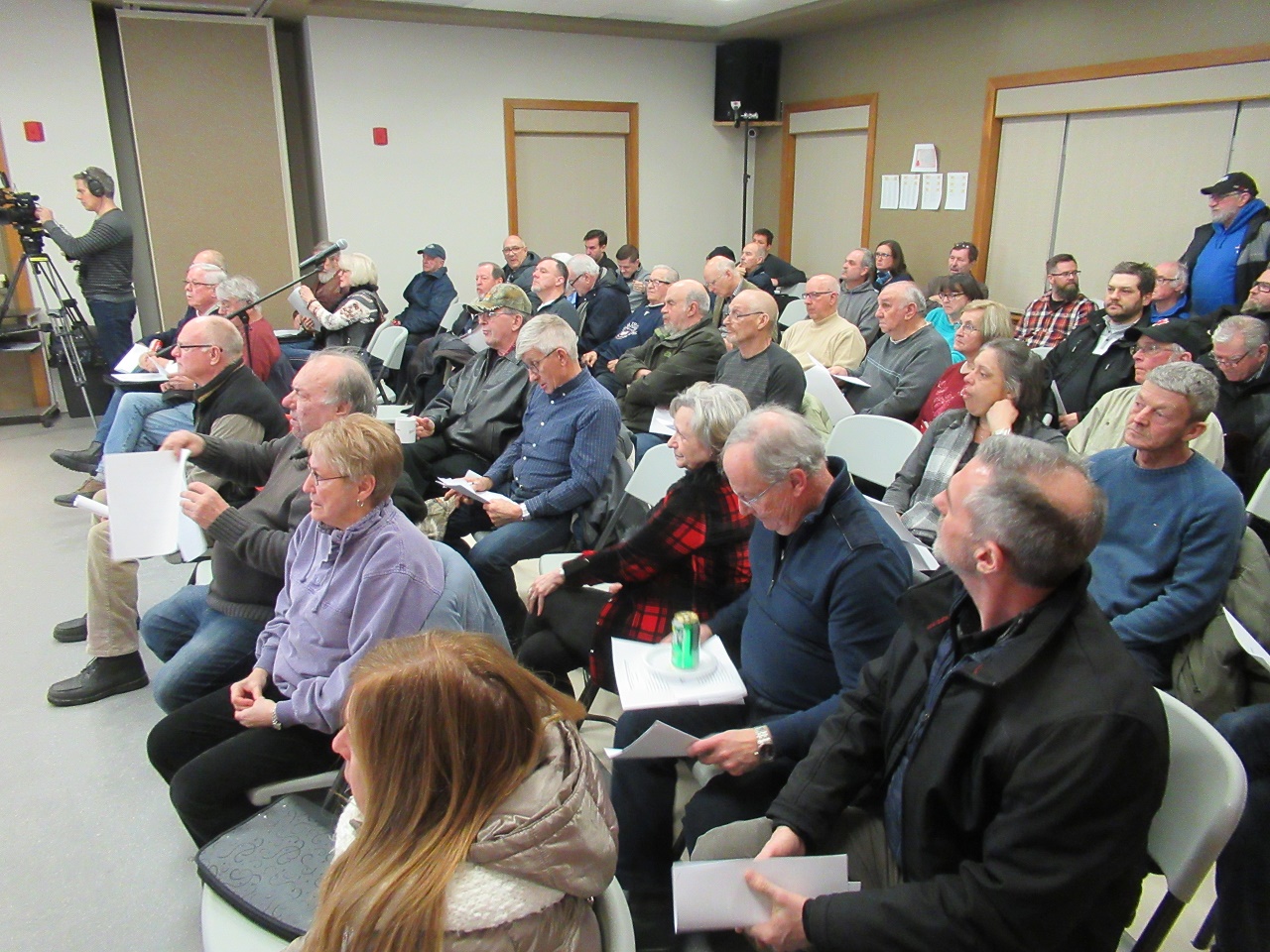 Approximately 60 residents attended a special Grenville-sur-la-Rouge council meeting on February 19 where an out-of-court settlement between the municipality and Canada Carbon Inc. was announced. Photo: James Morgan

A potentially lengthy and costly lawsuit involving the Municipality of Grenville-sur-la-Rouge and a company planning to develop a graphite mine in the municipality has been settled out of court.

The $96 million lawsuit against Grenville-sur-la-Rouge was launched by Canada Carbon Inc. following the municipality’s efforts to stop what is called the Miller Project, as part of the settlement between the company, municipality, and the Commission de protection du territoire agricole du Québec (CPTAQ), has been settled.  All legal costs related to the situation have also ceased.

Grenville-sur-la-Rouge Mayor Tom Arnold read the official announcement at a special council meeting held on February 19.  He explained now citizens can speak about the mine issue again without fear of legal consequences.  Cheers broke out from the audience of approximately 60 people in the council chambers.

Marc-André Lechasseur, the counsel representing the municipality, spoke positively of the out-of-court settlement.

“It’s a huge gain for everyone.  I think it’s a win-win,” said Lechasseur.

Grenville-sur-la-Rouge and Canada Carbon have agreed to initiate dialogue on the proposed project and present a process for that dialogue, with the assistance of the Québec ministry of energy and natural resources.  Both parties have also agreed to present all factual information regarding the environmental and community impacts of the project.

Canada Carbon will hold public consultations in Grenville-sur-la-Rouge on all aspects of the Miller Project.  The company and the municipality will collaborate in carrying out any necessary studies that will aid the municipality with understanding, analyzing, or participating in improving the project in order to make it more socially acceptable.

“This is the end of one chapter and the beginning of another for this project, which has yet to achieve social acceptability.  We will continue to act in the interest of the health, the safety, and the environment of our citizens,” stated Arnold.

Achieving that social acceptability will be the responsibility of a hearing to be held by the Québec Bureau d’audiences publiques sur l’environnement (BAPE-the provincial environmental public hearing office).  If the BAPE process determines the project has social acceptability and is ultimately approved by the minister of energy and natural resources, Canada Carbon would be limited to blasting and crushing at the mine site from 7 a.m. to 7 p.m. on weekdays.

If the project is approved, Canada Carbon would also have to assume its share of the costs related to bringing municipal roads, namely Scotch Road, up to the required standard before mining operations began.

Lechasseur said that including the CPTAQ and BAPE process, it could be another five years before if—or any mining takes place.  He said that BAPE recommendations are not legally binding and that the government could approve or disapprove the mine regardless of the BAPE findings.

“The settlement benefits all parties and will revive the Miller Project and enable the analysis of the project’s impacts and merits to resume,” said Canada Carbon CEO and Director Bruce Duncan in a press release issued by the company.

However, the municipality wants the Québec government to take measures to protect municipalities from legal challenges similar to what Grenville-sur-la-Rouge has undergone.

“Municipal laws must take precedence over the law of mines, not vice-versa,” said Arnold.

The case to determine if the $96 million dollar lawsuit was Strategic Lawsuit Against Public Participation (SLAP) remains before the Québec Court of Appeal.

McGillivray Lake Association Vice President Dan Séguin lives near the site of the proposed mine and is pleased with the out-of-court settlement.

“Canada Carbon has shown an open mind.  At least they want to start talking,” he said.