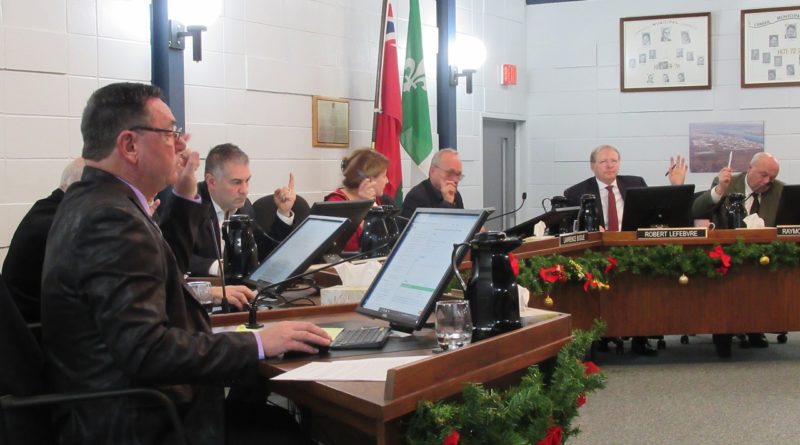 According to Treasurer Philippe Timbers, the 2.83 per cent increase is from the assessment base calculated by the Municipal Property Assessment Corporation (MPAC) and the actual municipal levy increase is projected to be 2.05 per cent.

Property owners with an MPAC assessment value increase of less than one per cent, the portion of their property taxes paid to the Town of Hawkesbury should decrease.

However, the tax rates are currently only estimates, and will not be formally adopted until the spring of 2020 and are subject to change, likely due to adjustments in the United Counties of Prescott and Russell’s tax ratios.

Before approving the budget, council also approved a by-law to begin the process of introducing development charges in Hawkesbury.  Under this new policy, developers of new residential, commercial, and industrial properties will have to pay fees for roads, sewer/water, and fire protection services to the town in order to receive a construction permit.  The idea behind development charges is to recover the costs of infrastructure expansion related to development and lessen the burden on existing taxpayers.

The 2020 budget includes an estimated $54,000 in development charge revenue for the town.  Development charges will not take effect until a 60-day period for public comment has passed and a public meeting has taken place.  Treasurer Philippe Timbers said that if the process results in the charges not being implemented, the budget will be adjusted to reflect the change in projected revenue.

The price of police

The budget includes a new three-year service contract with the OPP.  Councillor Robert Lefebvre said having a contract for specific functions is important in order to maintain services.  He noted that residents of municipalities without an OPP contract wait must wait longer for things like criminal record checks for employment or volunteer work involving children.

Lefebvre moved that council retain the enhancement in the contract that allows Hawkesbury residents to have same-day service for criminal record checks and it was approved.

Capital expenditures are set to increase by 28.6 per cent from 2019 to $8,286,595.  The largest capital project is $1,770,000 for a new rink refrigeration system at the Robert Hartley Sports Complex.  The second-largest capital item is a $1,040,000 upgrade to the chemical feed system at the water treatment plant, and the third-largest item is $1,000,000 for a new retaining wall on McGill Street.

Mayor Paula Assaly complimented Timbers and other members of the administration for their work on developing the budget.  She noted that council approved it two weeks earlier than in 2019.

One thought on “Hawkesbury council approves 2020 budget, town will collect 2.83 per cent more in taxes”