“It’s been a good year,” says Kirby about year as UCPR Warden 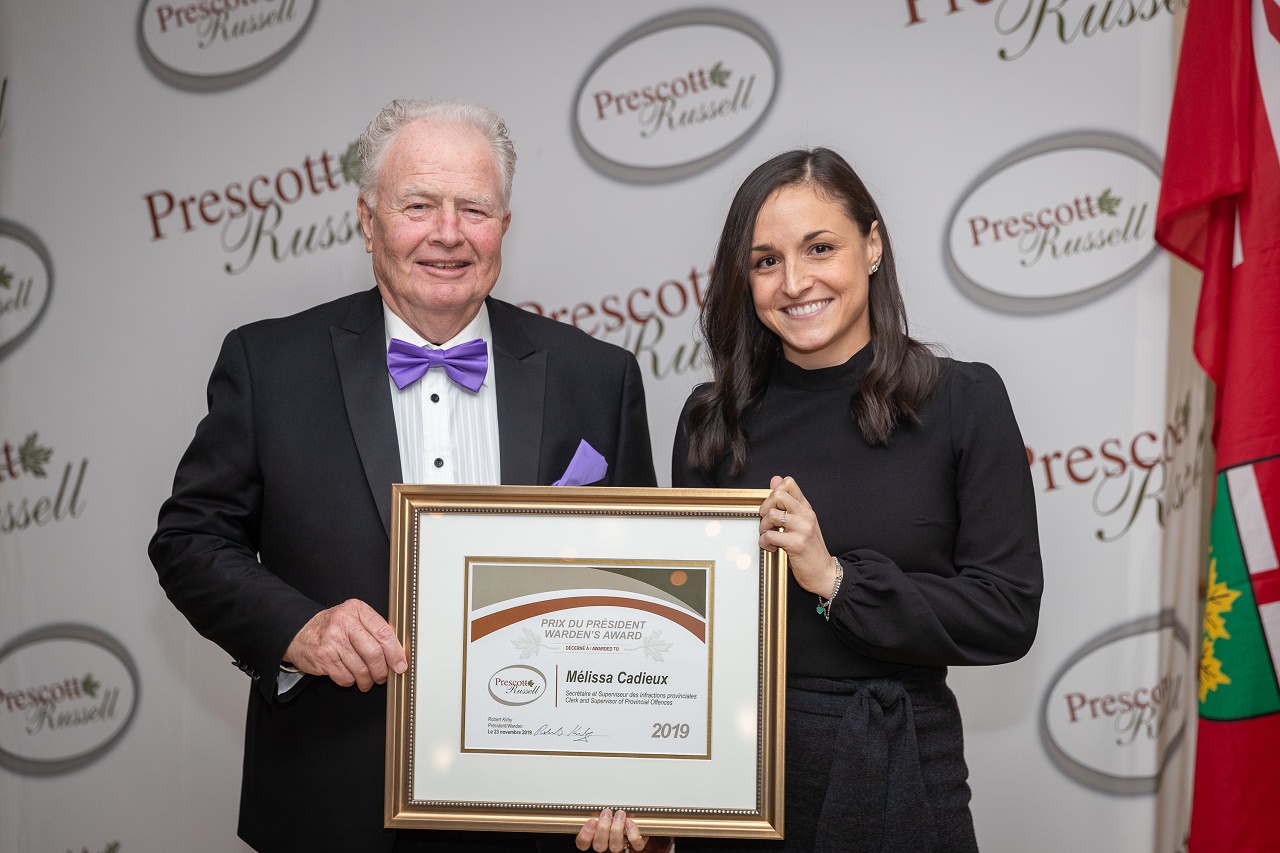 Robert Kirby’s year as Warden of the United Counties of Prescott and Russell (UCPR) has come to an end.

Kirby, who is also Mayor of East Hawkesbury, presided over his final UCPR council meeting on November 27 and the annual Warden’s Banquet was held on November 23 at the community centre in Kirby’s home village of Chute-à-Blondeau.  More than 225 people attended the event.

The evening also featured the presentation of two awards.  The 2019 J.P. St-Pierre Award was presented to François Latour for his Guinness World Record-setting threshing event on August 11 which raised $100,000 for the Canadian Breast Cancer Foundation.  The Warden’s Award, which is presented each year to a municipal employee for their achievements, was presented to UCPR Clerk Mélissa Cadieux.  Since becoming Clerk in 2018, and more recently also assuming the role of Supervisor of Provincial Offences, Cadieux has implemented measures to modernize and improve efficiency within the UCPR administration.

This year marked the third time Kirby has served as UCPR Warden.  The veteran municipal politician previously held the position in 2009 and 2015.

“It’s been a good year,” said Kirby.  He is especially pleased about the progress made on planning the new Prescott-Russell Residence which is to be built on Spence Avenue in Hawkesbury.

“It was a year with four new members.  They blended in well, everyone got along nicely and I’m very proud of that,” said Kirby of the four new mayors who sat on UCPR council in 2019.  Hawkesbury Mayor Paula Assaly, Casselman Mayor Daniel Lafleur, Champlain Mayor Normand Riopel, and Alfred and Plantagenet Mayor Stéphane Sarrazin were all newcomers to the regional government following the 2018 municipal election.

Kirby said there are projects and issues he wishes more progress could have been made on during the year.  They include the ongoing tension with neighbouring jurisdictions—particularly the City of Ottawa over UCPR ambulances responding to calls within their territories while leaving no vehicles to respond in the UCPR.  That situation has led to the UCPR ceasing to respond to most calls outside its territory and an investigation by the Ontario Ministry of Health.

“Progress has been made, but it’s still definitely not settled,” said Kirby.

The outgoing warden also said something needs to be done about the amount of garbage accumulating at certain private landfill sites across the UCPR.

“I don’t feel garbage should be piled and piled,” Kirby said.

Russell Township Mayor Pierre Leroux will serve as the UCPR Warden for 2020.  He will be sworn in at an inaugural meeting on Wednesday, December 18 at 7 p.m. at the UCPR administration building, located at 59 Court Street in L’Orignal.