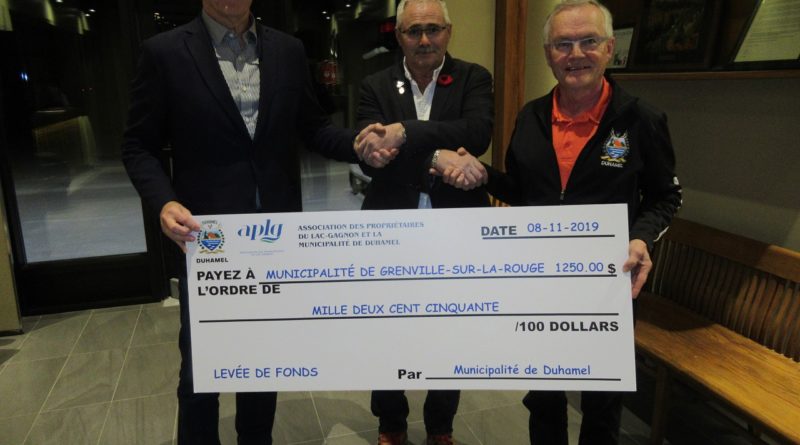 A legal defence fund in Grenville-sur-La-Rouge has received support from a municipality and property owners in a nearby region of Québec.

At the November 12 council meeting, Solidarité Grenville-sur-La-Rouge received $1,250 from the Municipality of Duhamel and the Lac Gagnon property owner’s association, both of which are located west of Grenville-Sur-La-Rouge at the northern end of Lac Simon.  The donation is a combination of funds contributed by the municipality and funds raised at the property associations Marche des couleurs event in October.

Including the donation from Duhamel and the Lac Gagnon property owners, the amount raised by Solidarité Grenville-Sur-La-Rouge is now more than $45,603.  Donations have been received from individuals, organizations, and municipalities locally and across Québec during the past six months.  Nearly 150 municipalities and regional governments throughout Québec have also approved resolutions in support of Grenville-Sur-La-Rouge’s efforts.

“The legal fight the municipality is fighting is for all municipalities,” said Grenville-Sur-La-Rouge Mayor Tom Arnold.