Last call: Images from Community Patchwork will be sold off in the spring of 2020

Some old community images will be up for sale in the spring, perhaps coinciding with the installation of the repainted Community Patchwork Mural.

When she was finished painting and coordinating fellow-artists who helped with the repainting of this Vankleek Hill mural, Lorie Turpin decided to offer the images — some of which are weathered and worn — asking a small sum for each image.

Originally painted by local artists Elisabeth Skelly and Odile Têtu, Turpin said that Skelly, who still lives in the area, agreed that the images could be cut from their original 4 x 8 panels and offered for sale if no one wanted to purchase a complete panel.

Now it is a few months later and there are still images left which Turpin says will be available in the spring as part of a one-day sale at Arbor Gallery (the date will be announced in the early spring). There are about 35 images left and they will be offered on a first-come, first-served basis.

Turpin says she was somewhat disappointed that there were not more takers when she offered the images to buyers for $10 each by posting on Facebook and the offering was also mentioned in one article in The Review.

But storing the images and especially trying to meet up with people to pick up their pieces proved to be a bit of a challenge. In recent weeks, Turpin says that people have now said they were interested but did not know about the offering.

That’s why Turpin will offer the entire lot during a one-day sale in the spring. And in the meantime, if you want to purchase a particular image, Turpin invites you to get in touch with her at: [email protected]

Some have disagreed with cutting the panels into the images, but Turpin said that it seemed like the only choice as the 15 four-by-eight foot panels would have been unwieldy to store and it would have been difficult to find anyone who wanted to purchase the entire lot. 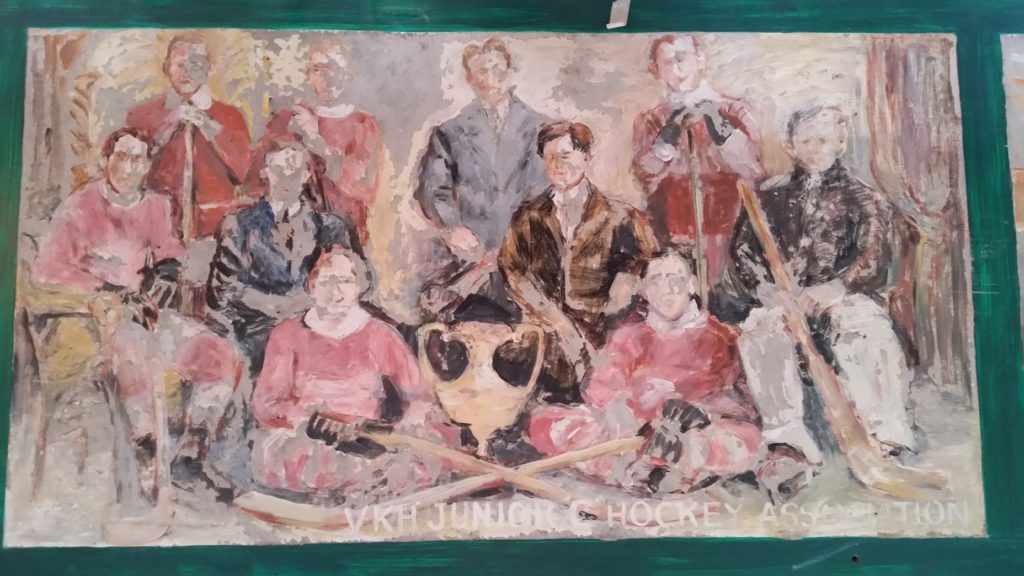 The words “The Vankleek Hill Junior Hockey Association” is the name of the sponsor of this particular image which was part of the original Community Patchwork Mural. Images were sponsored on the mural, which was painted about 20 years ago. A draft image of the entire mural was created by the artists, who calculated their total cost and apportioned it based on image size, offering sponsorship opportunities to the community. This image is of a Vankleek Hill hockey team with a cup. There are about 35 additional images which will be up for grabs at a spring fundraiser.

Turpin signed on for the repainting of the mural and began in January 2019. It took nine months to complete the project and she says she had invaluable help for tracing some of the images and then, closer to completion, several artists stepped up to assist.

“I painted five hours per day and it has been a long process,” says Turpin, who had to research the type of plywood and paint to use and sealed all of the plywood panels before beginning the painting process. Turpin organized transportation and relocated from the second floor of the Creating Centre to a workspace in the Jan Holland Chartered Accountant building on High Street soon after beginning the process.

The project took place under the umbrella of Arbor Gallery, which secured some funding to buy materials and get the work started; Derek Evans was involved at the outset of the project and did research and work to obtain funding for the mural copying expenses.

“Copying is not easy; it takes skill, too,” says Turpin, saying that there were 54 images in all and lots of faces to paint.

“I took this on and never gave it a second thought,” says Turpin.

“But I am happy with how it turned out. Even if there were days when I did not know how we were going to get through this — some of the images were barely there for us to copy — I am grateful for all of the help I had and am glad it is done,” said Turpin.

The repainted mural will be installed in the spring of 2020; it is too late to do so now as the mural  panels will be screwed on to the building and there needs to be sealing done where screws go through the wood. In addition, a wooden box or some type of enclosure will have to be built around an exterior chimney, which was installed on the north side of the building after the old mural was removed. But Turpin says that will all be figured out.

The mural will be installed on the north side of the building which is home to Pink Bow Tie and Totem Roasters. The building is owned by Carl Dubé; Turpin said he has offered to install the mural and is enthusiastic about having the images installed on his building.