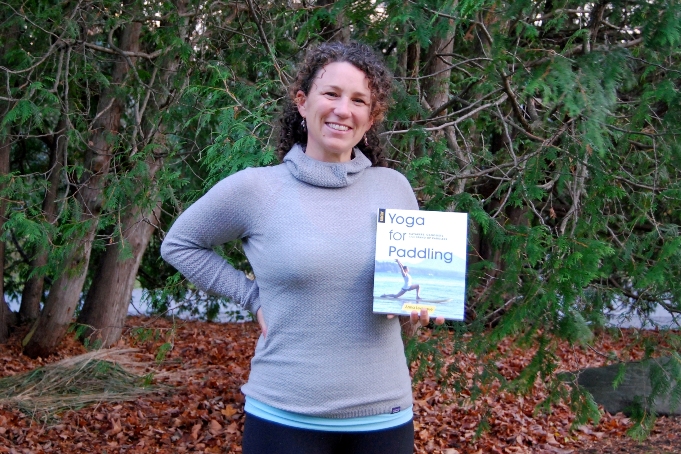 Anna Levesque, shown with her book Yoga for Paddling, has become a voice for empowering women in paddlesports and in life.

Anna Levesque has learned it’s better just to take the next step, rather than planning everything out first.

Step by step, Levesque has built her credentials, including certified whitewater kayaking instructor, yoga instructor, and Ayurveda wellness coach. Levesque is now an entrepreneur, educator, author, speaker, and passionate motivator of women in sport and life.

If she had planned everything first, her life would have looked much different.

Levesque, a graduate of Vankleek Hill Collegiate Institute, was born in Timmins and grew up in L’Orignal. She went to university in Chapel Hill, North Carolina, after which she planned to go to law school.

A summer job changed everything.

Levesque worked several summers during her university years at New World Rafting, on the Rouge River in Quebec. Although her duties did not involve rafting—she worked in the kitchen at first, then reservations—Levesque felt drawn to river sports.

“My experience those summers introduced me to a whole new world of outdoor activity,” says Levesque. Although she had been involved in skiing and cycling, Levesque never considered herself an outdoor person.

While trying whitewater kayaking for the first time, she noticed that kayakers exhibited a positive outlook on life.

“Every one of them seemed happy,” says Levesque. She realized kayakers had a passion for life, and that they prioritized their passion, and their joy, in life. 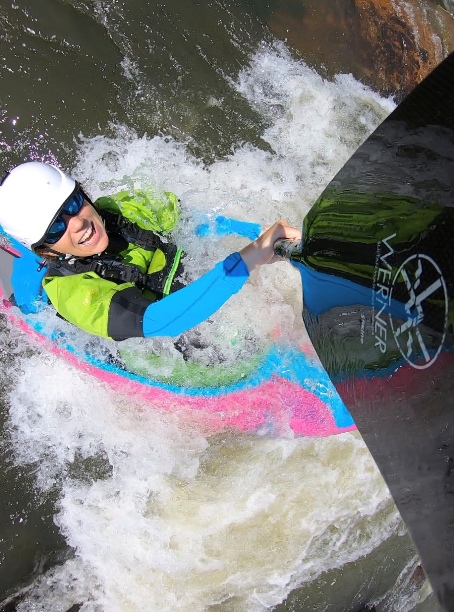 Anna Levesque says whitewater kayaking helped her “discover what it felt like to be truly alive.” (photo courtesy Anna Levesque)

Levesque realigned her priorities and pursued river guide training in West Virginia. With no roadmap to tell her “what next,” Levesque scanned ads in Outdoor magazine and sent out resumes to outfitters and adventure guide organizations.

She was hired by an entrepreneur who ran adventure tours in Costa Rica, and Levesque spent six weeks there as a river guide. Levesque went on to guide in Mexico, Ecuador, and Chile.

When another kayaker mentioned to her that she was good enough to compete, Levesque tried out and was accepted to the Canadian Freestyle team for kayaking. Levesque went on to win bronze in at the World Championships in 2001.

Levesque met her future husband on the competition circuit. They eventually settled in Asheville, North Carolina. Levesque’s path in life continued to reveal itself in unanticipated ways.

As Levesque continued kayaking on different and “scary” rivers, she noticed that, of the few women kayaking, many struggled with confidence. Levesque realized there were elements of kayaking that were different for women—balance, for example—yet training focused on men, who made up 70% of kayakers.

Levesque approached a producer of kayaking videos and soon Levesque was making a video of kayaking for women. The video premiered at the Whitewater Symposium to a standing ovation.

“That experience made a positive impact on me,” says Levesque, of the video’s reception.

With sponsorship backing, Levesque began touring and promoting the video. Levesque went on to make several more videos, for both whitewater and flatwater.

“I became the voice in that industry for empowering women,” says Levesque. She realized that women needed a supportive environment, as many found it intimidating to be surrounded by apparently confident men.

Levesque began marketing empowerment programs online. She continued her own growth, studying to be a yoga instructor and a certified instructor for paddleboarding.

In 2011 she developed a yoga program for paddleboarding. A few years later publisher Falcon Guides approached her to write a book. Yoga for Paddling, published in 2017, is a guide to yoga poses specifically beneficial to kayakers, canoeists, and stand-up paddlers.

Pursuing her passions has allowed Levesque’s business Mind Body Paddle to grow organically. Levesque is developing the “mindset coaching” aspect of her business and offers several different programs, for groups or individuals.

“I teach women how to prioritize their passion,” says Levesque. “Women are traditionally the tenders, the nurturers, and sometimes they forget what it’s like to do something for themselves.”

Levesque incorporates adventure sports into many programs, as she believes it’s important for women to step outside of their comfort zones.

“Fear reminds us we’re alive,” says Levesque. “We tend to avoid discomfort, but it’s how we grow.”

Levesque, called “one of the most inspirational paddlers alive” by Canoe & Kayak magazine, posts weekly inspirational blogs on her website at mindbodypaddle.com. 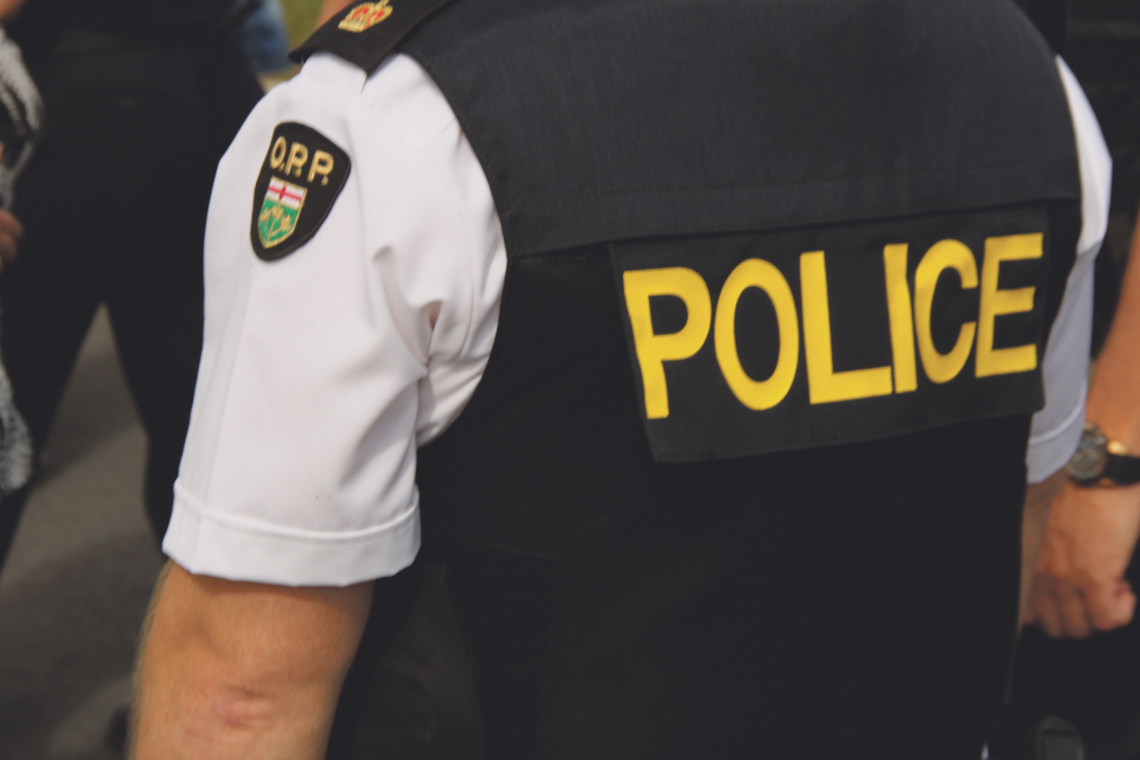 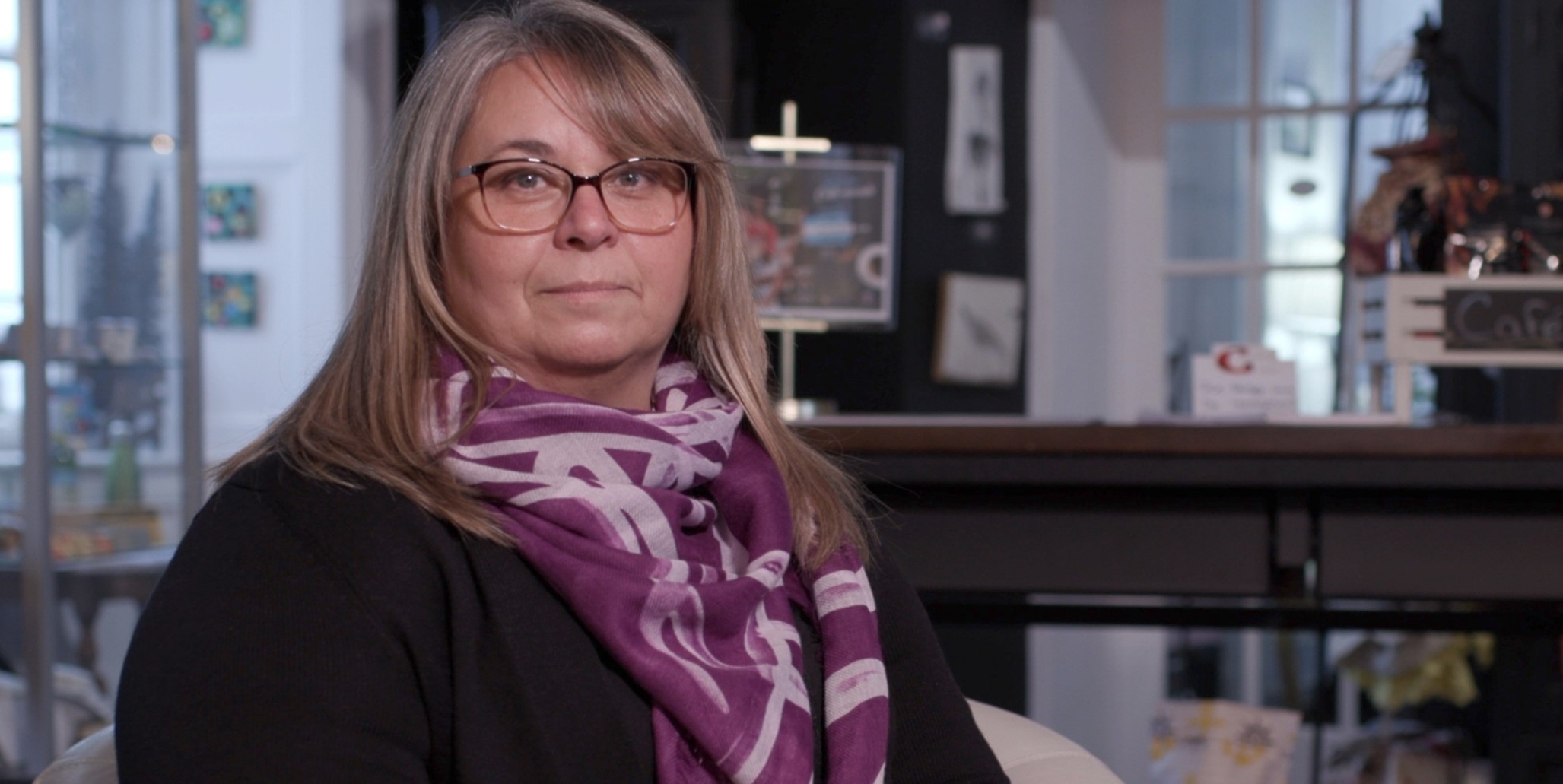 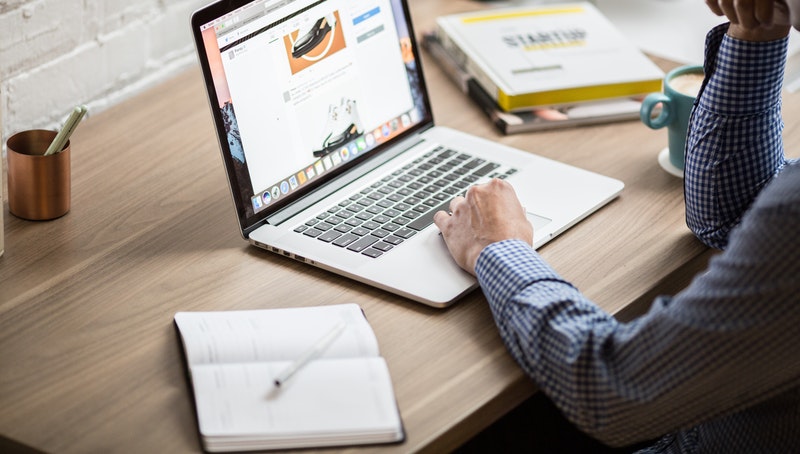