A postcard from the past: Maxville celebrates heritage with historical mural

A ribbon cutting was held on November 2 to celebrate the unveiling of the King George Park Mural, in Maxville, Ontario.

On October 30 a new mural was unveiled in King George Park, in Maxville – and it’s left the community buzzing. Organizers admit, they didn’t try too hard to keep the surprise a secret. That’s nearly impossible to do when you’re dealing with a 16-foot by 24-foot piece of art being installed in the centre of town.

The King George Park Mural was commissioned by the Township of North Glengarry’s Arts, Culture and Heritage Advisory Committee. The goal of the mural was to expand upon the work being done in conjunction with the Friends of the King George Park to beautify Main Street and to bring added value to the park, which is used for community events, Christmas celebrations and as the home base of the Maxville Farmers’ Market.

Postcard from the past

The committee is happy to report that the final result turned out even better than expected. The image featured in the mural is of Main Street Maxville, as it would have appeared in 1906. If you stand in the park beside the mural and look South down Main Street, you will be able to see Maxville as it appeared both then and now. The red-brick building featured on the right side of the mural is of the Commercial Hotel. The Commercial Hotel was destroyed by the fire of 1921, which gutted the business district. In January 1923 it came back as the King George Hotel and thrived for many years thereafter. The King George Park now stands in the original location of the King George Hotel. The tartan that surrounds the mural is the “Glengarry Tartan”. This tartan is the official trademark of the Glengarry Highland Games and it is also used in the branding for the Township of North Glengarry.

Just down the street from the park is the new Maxville Water Tower, which bears this same tartan. The “Tartan Tower from North Glengarry”, as it was recently coined by the media, garnered attention from across the country, as Canada’s only contender in the 2019 Tnemec Tank of the Year contest, which closed voting on October 18. The “tartan tower” won more than 4,000 votes, representing about 20% of the total vote – and it came close to being named as the 2019 Popular Choice Vote, sitting in top place for nearly a week before voting closed. The tower landed in second-place in the contest and won the right to proudly declare that it is one of the most beautiful tanks in North America. The Maxville Water Tower will be featured in Tnemec’s 2020 Calendar. You can order a free copy at https://tnemec.wufoo.com/forms/z1h4yn3714sz6ko/

This project couldn’t have been accomplished without the talent of a local artist. The original concept for the mural came from a tiny postcard rendering. Christina (Tina) Whitman, of the Glengarry Artists’ Collective was commissioned to take a 4-inch by 6-inch postcard and turn it into a three-feet by four-feet wide painting. The painting was then professionally photographed and printed onto the aluminum panels that transformed it into a mural.

Everyone is invited to visit the mural at its location on the north side of the Muir’s Bakery building located in King George Park, in Maxville. The committee thanks the MacEwen family for allowing the mural to be installed on their property, where it can be enjoyed by all who visit Maxville. 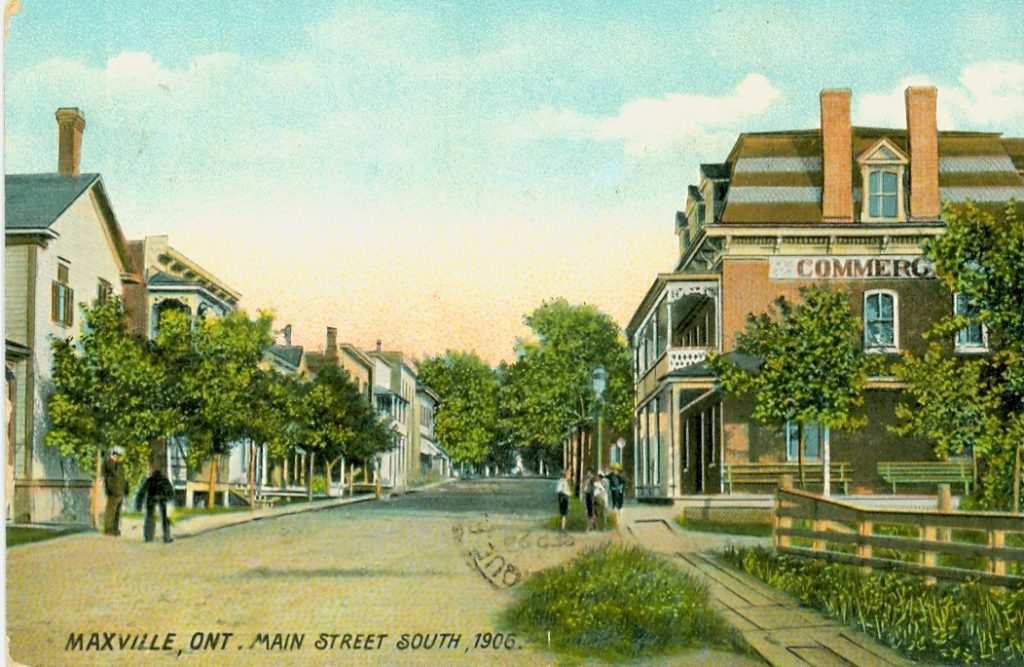 The original postcard, as it appeared (including the stamp from the post office).