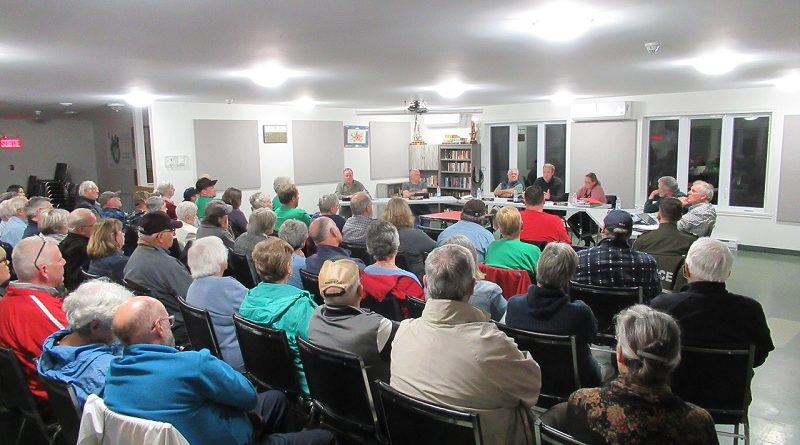 Many of the residents who attended the October 7 Wentworth council meeting were there to support Mayor Jason Morrison. Photo: James Morgan

Following a tumultuous meeting in September, Wentworth Mayor Jason Morrison aimed to set the record straight at the October 7 council meeting and reduce tensions between the township and the Lac Louisa Property Owners Association (LLPOA).

The LLPOA had previously demanded Morrison’s resignation and alleged he was colluding with Australian developer Oliver Tham who has expressed interest in building a recreational resort on property fronting the north shore of Lac Louisa.

“I find these accusations to be deplorable,” Morrison told council and the audience of 55 people, many of whom were wearing green “We support our mayor and council” t-shirts.

Tham has placed a deposit on the property but no formal project plan has been deposited with the township.

Morrison said there was confusion surrounding zoning by-law changes made in September 2018.  Many residents thought they related to the resort idea.  However, they were designed to comply with new planning policies from the Québec government known as Orientation 10.

In June 2018, Morrison appeared in a photo with Oliver Tham, which led to the LLPOA accusing the mayor of helping to enable the resort project.  Morrison said the meeting took place at the Gore Township fire station and was the result of Tham wanting simply to meet him and discuss his idea.  Morrison was working as the municipal inspector for Gore at the time and his employment there overlapped for approximately a year after he was elected as mayor of Wentworth in 2017.

Morrison said he referred Tham to township and MRC d’Argenteuil staff who could answer his questions about the regulatory process.  The mayor emphasized that he does not vote on development decisions and that councillors have the final say.

“You can shove that request,” Morrison said forcefully to loud applause in response to the LLPOA requesting his resignation.

A lawyer for the township has sent a letter to the LLPOA requesting it remove information it considers to be incorrect from its website.  A resolution was also approved pledging that the township would place the protection of the natural environment as its top priority, and that recreational trails for hiking, cycling, and snowshoeing would be preferred over golf courses for any future developments.  Morrison noted that Tham is no longer interested in building a golf course.  The LLPOA had strongly objected to golf because of concerns that pesticide and herbicide runoff would harm Lac Louisa.

The mayor extended what he called an “olive branch” to the LLPOA to begin respectful relations again, if it complies with the demand to remove the accusatory information from its website.  Morrison is also hoping that Philippe Cyr will help restore the relationship between the municipality and the LLPOA.  Cyr won the special election on October 6 to fill the vacancy caused when former councillor Jean-Guy Dubé resigned during the summer.  Cyr is a member of the LLPOA board.

LLPOA spokesperson Karl Wockner said the LLPOA would accept the mayor’s olive branch in some form.

“I sensed a different tone tonight and we appreciate it,” he said.