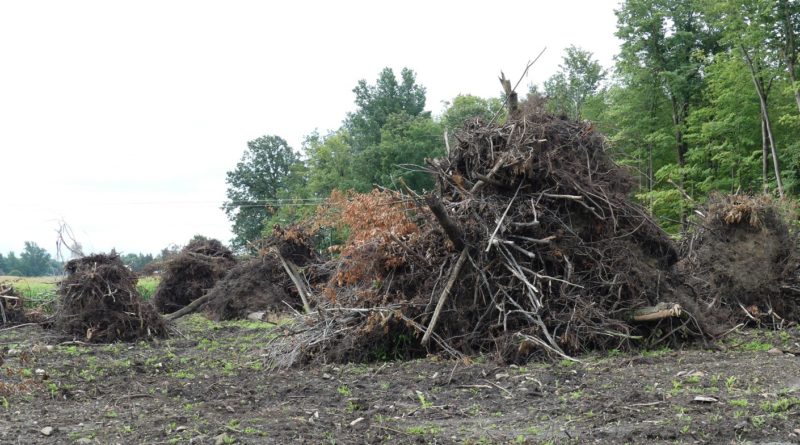 Will the feller-bunchers and chainsaws fall silent only when every last local forest is slashed and burned off  the map?

The President of the SDG Chapter of the Ontario Woodlot Association (OWA), Elaine Kennedy, says, “Local politicians need to engage with the public to discuss the future of our forests.”

With the provincial government downloading responsibility for forests onto local governments, Kennedy urges “a frank, respectful discussion about how important trees are, and what can we do about protecting them in a way that does not hurt the economic situation for the farmers.” Each municipality should form a group, “representing all people” to conduct those discussions, she says.

An average of 1 million trees, per year, were lost in the South Nation Watershed between 2008 and 2014.  South Nation Conservation (SNC) reports indicate that forest canopy in SDG dropped to 29 per cent in 2014; in Prescott Russell the number was 24.8 per cent.

“What’s the loss of trees doing to our atmosphere; what’s it doing to our water quality?” asks OWA Director Hennie Velema of the ongoing deforestation and environmental degradation.

In 2014, three Stormont, Dundas and Glengarry municipalities were already below the 30 per cent minimum forest cover level recommended by Environment and Climate Change Canada.

SNC officials expect a further decline in forest cover when the next aerial measurements take place in 2020.  “We have the feeling it’s going to be shocking, super-stunning,” says SNC Planning Team Lead Alison McDonald.

A part of the answer could be tree-cutting bylaws — a power most rural townships have been loathe to exercise to date. In theory, a bylaw could be broad-based, requiring a permit to cut any tree. Or it could be tailored as a permitting system aimed at landowners wanting to clear-cut an entire forest or woodlot.

Currently, “nothing prevents people from clearing trees,” emphasizes McDonald, noting the issue extends far beyond agriculture: General land developers, she points out, are currently free to “pre-clear” treed properties to avoid existing provincial environmental rules that otherwise kick in if those trees remain standing when local planning approval is sought  — a “loophole” that could be addressed with an upfront municipal permitting system for clear-cuts.

Often, “people are cutting on speculation and not even farming it,” she also observes.

“What is the long-term plan for any of these big farmers and the rural population?” asks OWA director Bruce MacPherson. “Cash crop farming prices this year are not nearly as good as two years ago.”

Zone 11 Ontario Federation of Agriculture Director Jackie Pemberton links the clear-cutting activity to the replacement of farmland lost to urban sprawl in places like Toronto and Barrie.  Agriculture does have a positive effect on the environment, the Inkerman resident also asserts, noting “it’s not just the trees that sequester carbon. We do our part as well. Far better than a parking lot does — or a house.”

SNC’s 2018 report Protecting and Increasing Forest Cover in the South Nation Conservation Jurisdiction recommends carrots for landowners — such as tree-planting, education programs and lowering property taxes on wooded areas — but hints at possible sticks, too, with a suggested “review” of “legislative tools” and “policy changes” to mitigate tree loss. Pemberton chaired one of the two committees whose findings went into the report.

“It’s the public that feels regulation should happen,” she acknowledges, noting it was the work of the second committee, known as the Forest Conservation Working Group — not her own committee of agricultural reps — that called upon municipalities to “consider” implementing bylaws to conserve trees.

While municipalities had until March 1st of this year to file a notice with the province detailing how they are handling tree conservation, that deadline did not require them to commit to passing any sort of tree-cutting bylaw.  The version approved earlier this year by the Council of the United Counties of Stormont, Dundas and Glengarry “is so generic, there’s no teeth in that bylaw at all,” concedes SDG Warden Jamie MacDonald.

“Everybody’s doing the wait-and-see.  Truthfully, it’s a hot potato; we just mention we’re talking about tree-cutting and where you normally have two people at a meeting, you have 75,” the warden says.  “It’s just one of those things that I think a lot of municipalities are waiting for somebody to take that step.”

That step can’t happen fast enough for clear-cutting protester Andy Perreault in neighbouring Champlain Township. Perreault alleges that Quebecers are “buying up the land just so they can lay waste to it.

“I’m watching the very fabric of Ontario rolling by on Highway 34 filled with either wood chips, old-growth peat moss, topsoil, you name it, it’s on an 18-wheeler and it’s got Quebec plates, and they’re just decimating us.”

MacPherson echoes the concern, ruefully pointing out that Quebec operators are free to strip the farm land of trees in his native South Glengarry, yet are prohibited from doing so in their home province.

Political procrastination and tentative steps: Are they really enough to save the dwindling forests of SDG — and beyond?

louise has 1289 posts and counting.See all posts by louise