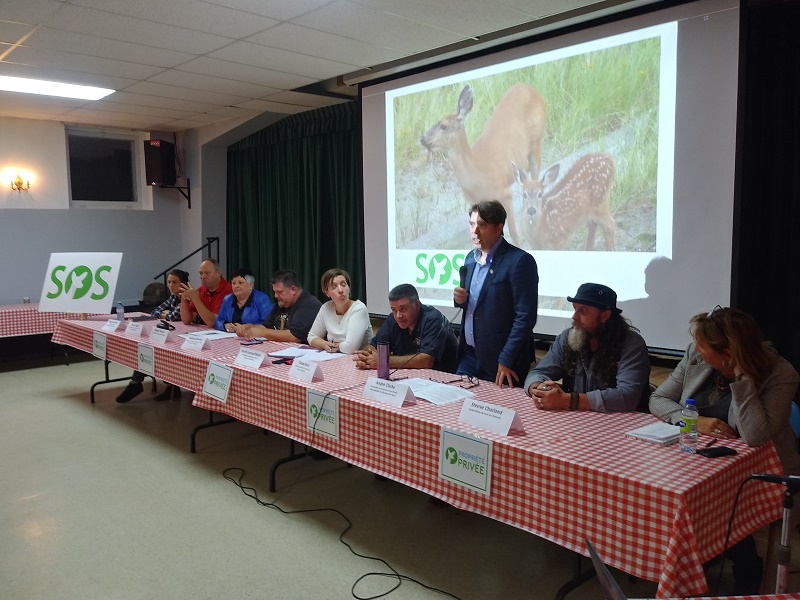 In response to the discovery of Chronic Wasting Disease (CWD) in a domestic red deer herd in Boileau in 2018, the Ministère des Forêts, de la Faune et des Parcs (MFFP/Ministry of Forests, Wildlife and Parks) has taken measures to maintain a low-density deer population in the southern Laurentians in order to reduce contact between animals and prevent any undetected cases of CWD from spreading.

The measures include relaxing hunting regulations.  One whitetail deer per hunting licence will be permitted, including does and fawns within the Enhanced Management Area (EMA) for the whitetail deer hunting season beginning on September 21.

All deer-hunting arms, such as muzzle-loaded firearms, shotguns, bows, and crossbows will be permitted during the season, which continues until November 17.

Concerned individuals held a meeting on September 13 in St-Michel-de-Wentworth to discuss what they believe will be negative impacts resulting from the relaxed regulations.  One of the major objections is over how the outbreak in the domestic herd was managed by the MFFP, the Québec Ministère de l’Agriculture, des Pêcheries, et de l’Alimentation (MAPAQ/Ministry of Agriculture, Fisheries, and Food), and the federal Canadian Food Inspection Agency (CFIA).

“It is difficult to understand why the pens of the breeding farm where the sick red deer came from are not yet decontaminated. That communication is, so to speak, very difficult between municipalities and the MFFP, MAPAQ and CFIA,” said biologist Richard Beauchemin.

The municipal leaders and landowners are also anticipating an increase in poaching, trespassing, break-ins, and tension between non-residents and residents.  They also predict economic activity in the area will decline because of fewer deer in future years.

In response to the relaxed hunting regulations, municipalities and citizens could take responsible countermeasures.  Those include banning parking and discharging of firearms in certain areas or posting signs in villages and on rural properties promoting the freedom of deer, according to Grenville-sur-la-Rouge Councillor Marc Le Gris.

A petition has also been launched on www.change.org against allowing fawns and does to be hunted in the EMA.