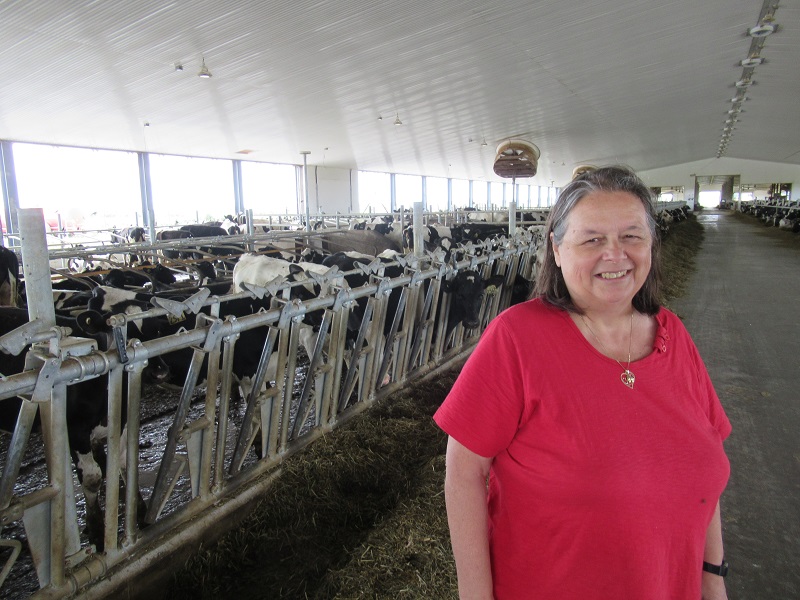 Johanne Lafrance and some of the 700 cattle in her family’s dairy barn in East Hawkesbury. Photo: James Morgan

The Lafrance family East Hawkesbury has been farming since 1882.  This year, they are one of 11 recipients across Ontario of the BMO Ontario Farm Family Award.

Presented by the Bank of Montreal in conjunction with the Ontario Plowmen’s Association, the awards are given to farm families who have a strong commitment to agriculture and the community, innovative approaches to growing their business, traditional values, and high standards of sustainability.

The Lafrances currently have 700 head of Holstein cattle in their barn at the main farm on the 7th Concession.  Johanne and Michel Lafrance operate the farm with their sons Laurier and Jonathan, and also have three grandchildren.  Three full-time employees also work on the farm.

The dairy operation was a traditional tie-stall setup until 2000 when they built a new barn across the road, which they expanded in 2010, and 2018.  In addition to the dairy barn, the Lafrances cultivate 2,000 acres of wheat, corn, and soybeans between the home farm and another property near Dalkeith.

Johanne said their family and farm were recommended for the award by François Allard, who works at the Bank of Montreal’s agriculture branch in Embrun, and was previously with Farm Credit Canada.

There was a strong interest in having francophone farm families as award recipients this year because the 2019 International Plowing Match and Rural Expo (IPM) is in West Nipissing, a majority francophone municipality located between North Bay and Sudbury in northern Ontario.  This year’s IPM takes place from September 17 to 21.

Johanne said they will formally receive their award on the final day of the IPM.  She was not sure if Michel would be making the trip to northern Ontario with her because it depends if they will be harvesting corn at that time.  Johanne said she will be going to the IPM for sure and has rarely missed the event in other places around the province in recent years.  She was a volunteer when the IPM was hosted by Prescott and Russell counties in 2011 at the Kirby farm in Chute-à-Blondeau.

Another eastern Ontario family receiving a 2019 BMO Ontario Farm Family Award is the Quesnel family who own and operate Ferme LCM Quesnel near Moose Creek.

Since the BMO Ontario Farm Family Awards began in 2012, 83 families across the province have been honoured for their contributions to agriculture.

If you are planning on making the trip north to the IPM in West Nipissing, advance tickets are $15 per day, per person, or $20 at the gate.  Further information is available at https://www.plowingmatch.org/ipm2019/