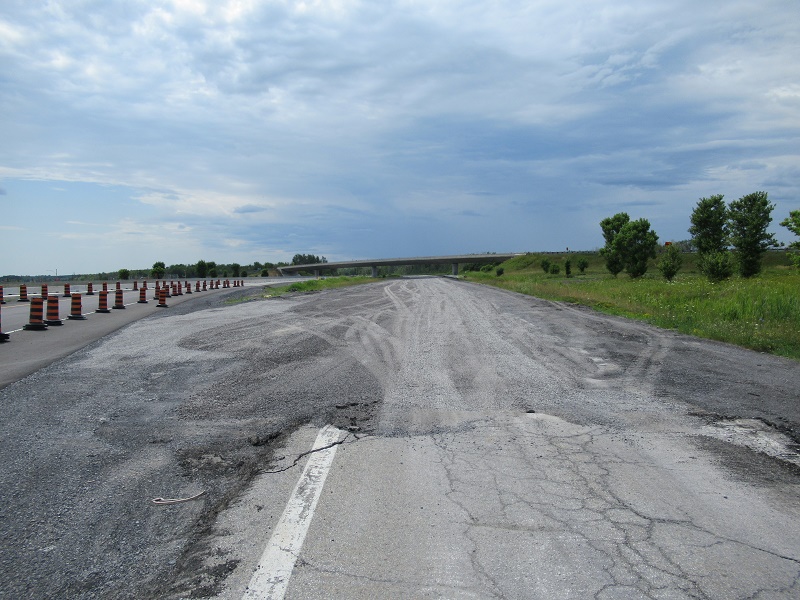 Looking westbound on Highway 417 towards Highway 34 overpass. The old concrete has been completely removed and the new surface will be poured in its place. Photo: James Morgan

On the surface, it looks like any other highway construction project, but there is more to it.

According to MTO spokespersons Brandy Duhaime and Bronte Walker-Moores, the typical lifespan for a concrete highway in Ontario is 28 years before major rehabilitation is required.  However, this section of highway is being replaced just 15 years after it was installed.

Duhaime explained that deficiencies in the concrete were identified when it was being poured in 2004, and that has likely contributed to deterioration which has happened more rapidly, relative to other concrete highways.

The concrete has deteriorated due to freezing and thawing within the pavement joints.  The construction company that poured the concrete did some repairs over the years, but the warranty expired in 2017.  The MTO decided that it would be more cost-effective to completely replace the affected section rather than make more isolated repairs.

Duhaime explained that because the warranty expired in 2017, the contractor that did the work in 2004 has no responsibility for the current replacement work.  The 2004 project, which included grading, drainage, granular base, concrete, structural, and some electrical work, cost $29.3 million.  The current project, which includes improvements that have already been made to the Highway 34 interchange, is costing the MTO $20.35 million.

According to Walker-Moores, the ministry was not satisfied with the work done by the contractor when it was completed in 2004.  In response, the contractor completed a remedial action strategy that included future repairs which would be completely paid for during the 11-year extended warranty imposed by the MTO.  The industry standard warranty is one year.

Walker-Moores explained that the MTO consulted with internal and external experts who were satisfied that the various repairs that have been done on the concrete during the warranty period would correct the problems during the extended warranty period.  However, Walker-Moores said “other deficiencies” not covered by the warranty were also discovered that have also affected concrete highway surfaces in other parts of Canada and the United States.

The problems with the concrete on Highway 417 led the MTO to review its practices in an attempt to prevent a similar situation from occurring again.  According to Duhaime and Walker-Moores, the ministry investigated other highways paved with concrete throughout Ontario and consulted with experts in other jurisdictions, including the United States.

As a result of the investigation, the MTO made a number of significant changes to its concrete pavement specifications that construction contractors have had to follow since 2018.  The changes include using stronger concrete and changing the design of the joints to reduce the opportunity for water to enter.