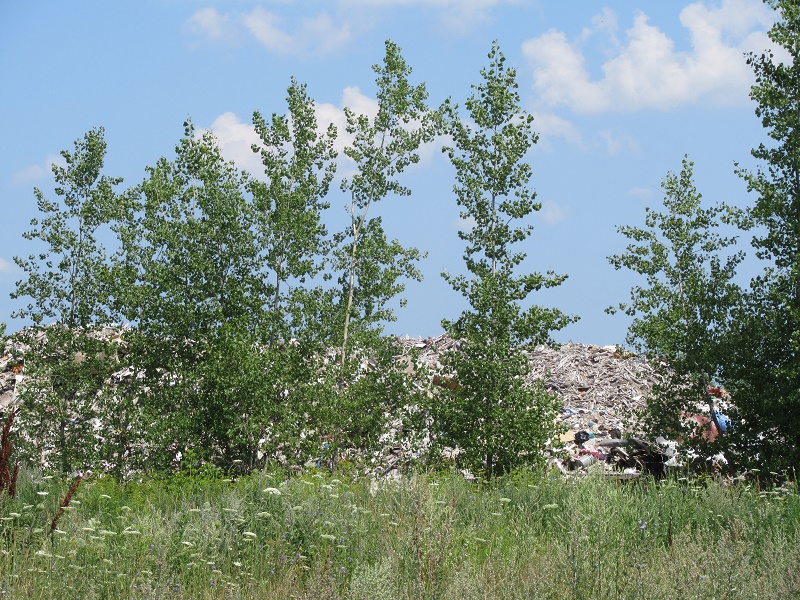 A hill of construction waste on the former WW II-era air force base near St-Eugène. Photo: James Morgan

The largest hill most people see from St-Eugène is Mont-Rigaud in the distance, but there is a less-attractive landform south of the village, behind some trees on the east side of County Road 14.

Hills of building construction waste have accumulated there, and the Township of East Hawkesbury is attempting to have it removed.

Township of East Hawkesbury Clerk-Chief Administrative Officer Luc Lalonde would not identify the name of the company which owns the property or who has been dumping the waste at the site.

The township has given the company a September 1 deadline to develop a site plan to remove and process the materials, which look mostly like wood, plaster, and insulation from a distance.

Lalonde insisted that it is all dry construction material which was brought to the site to be recycled on location.  He also said the materials were checked and none of them are contaminated and that the dumping was first noticed a few months ago.

Observations made while driving by the property indicated it is accessible from both County Road 14 and from Concession 6.

During World War II, the property was the site of the No. 13 Elementary Flying Training School, an air force base used to train air force pilots and crews under the British Commonwealth Air Training Plan (BCATP).  St-Eugène was one of nearly 200 BCATP bases across Canada that trained more than 131,000 people for service in the Royal Canadian Air Force and the air forces of other Commonwealth Countries.

The base operated from 1940 to 1945.  The only structures remaining from the air force days are part of a concrete wall and a building that looks to be in considerable disrepair.  One of the hangars was disassembled after the war and the trusses are now part of the Bonnie Glen dance and banquet hall on Highway 43 near Alexandria.

On August 12, a local resident is planning to speak to East Hawkesbury Council about the history of the former BCATP air base.  That meeting begins at 6:30 p.m. and takes place at the East Hawkesbury municipal office, located at 5151 County Road 14 in St-Eugène.