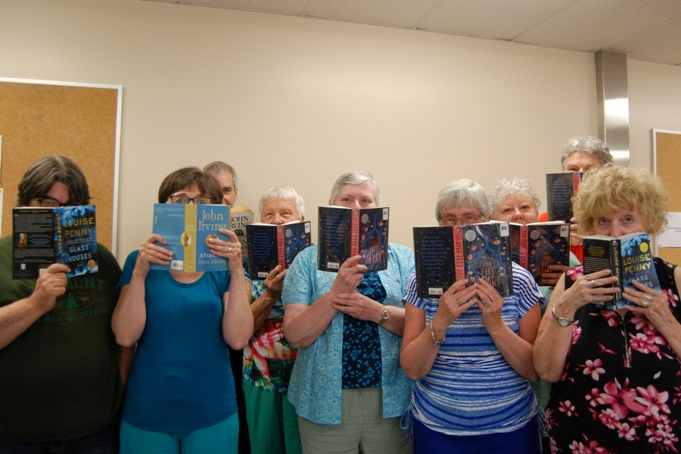 “We enjoy each other’s company,” says Lesley Orr, the book club’s coordinator. “Everyone gets along well; we have good rapport.”

Orr has always been an avid reader. She was a professor of literature during her career and, after she retired, she decided to join a book club.

She recalls trying to join the Glengarry Encore book club for several years but, each time she tried to register, the maximum number of group members had already been reached. Undaunted, Orr “crashed” one of the meetings.

“I just showed up,” says Orr, “and dared them to throw me out.” Orr didn’t get thrown out, and five years ago became the group’s coordinator when the previous coordinator stepped down.

The book club is part of Glengarry Encore Education Centre’s programming. Glengarry Encore provides educational and general-interest workshops for adults at its Alexandria location as well as off-campus sites around the area.

Officially, the book club is capped at ten members to ensure ample time for everyone to contribute to each meeting’s discussion. At each of the two annual registration periods, regular members re-register to continue their participation in the group.

“We meet ten months of the year,” says Orr, “and ten members allows each person to select one book for the following year.” The group primarily reads fiction, but also includes some non-fiction for variety.

Many people love reading, says Orr. At the book club, they enjoy sharing their opinions and hearing others’ opinions on books they’ve read. During the lively June meeting, members expressed diverse impressions of the three books they’d recently read.

“Everyone in the group has different interests,” says Orr. “You end up reading books you wouldn’t have ordinarily considered.” Orr says reading books outside her interests gives her a broader outlook.

Bad weather during the registration for the Winter/Spring semester prevented some of the regular members from submitting their registrations before the cap of ten was reached. To avoid excluding those dedicated members, Glengarry Encore allowed the group to grow to sixteen members for one semester.

The cancellation of interlibrary loan services at Ontario public libraries this spring prompted the group to re-evaluate how it operates. Intense discussions consumed three meetings; meanwhile, interlibrary loan was partially reinstated in Ontario.

At its June meeting, the book club decided to split into two groups of ten starting this fall. One group will continue to read books selected by its members, beginning with The Art of Racing in the Rain, by Garth Stein, for September. The second group will choose from the SDG Library’s book club kits, starting with They Left Us Everything, by Plum Johnson.

Registration for Glengarry Encore’s programming, including the book club, takes place in advance of each of its two semesters, Fall, and Winter/Spring. For program details, go to glengarryencore.com or phone 613-525-1008.