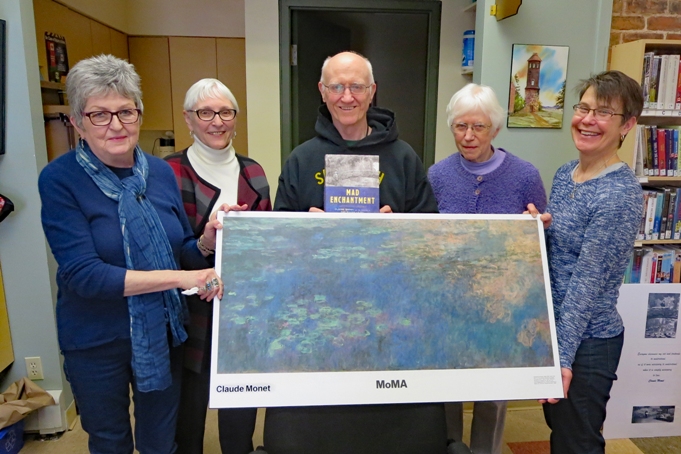 Book clubs are about more than books. For the members of Champlain Library’s non-fiction book club, it’s the pursuit of knowledge that inspires them.

The adult non-fiction club at Champlain Library in Vankleek Hill was conceived by group member and library volunteer Jane Fantie. While out walking and talking with other community members, she realized there was a need for a book club that doesn’t focus on fiction.

“Non-fiction lends itself to deeper discussions of current affairs and topics relevant to what’s going on in the world around us,” says Fantie.

The book club was formed this spring as a trial, to gauge the level of interest in the group, as well as to determine if enough copies of non-fiction titles could be obtained.

“What makes the non-fiction group different is that we read for information rather than entertainment,” says club member Eva Levesque. Levesque spent most of her career as a teacher, and has never stopped seeking information.

At the group’s April meeting, however, Levesque managed to introduce a bit of entertainment to accompany the discussion on that month’s read, Mad Enchantment: Claude Monet and the painting of The Water Lilies, by Ross King. Levesque, who suggested King’s book to the group, added a visual element to the discussion by unveiling a large print of Monet’s Water Lilies, which she’d recently ordered from the Museum of Modern Art in New York.

Everyone at that meeting agreed they would not have read the book on Monet except for the book club. The same could be said about all their club reads to date, including Sapiens: A Brief History of Humankind by Yuval Harari, and NeuroTribes: The Legacy of Autism and the Future of Neurodiversity, by Steve Silberman.

Group members take turns selecting each month’s book. Members have a variety of interests but they share a common philosophy: the greatest opportunity for learning comes from reading books outside their individual interests and experiences. Whichever member selected the book opens the discussion at the meeting, and explains why they chose that book. Conversation around the meeting table then spins off in many directions.

Discussion on the King book centred less on Monet and more on the historical period of the late nineteenth century through to World War I. Book club members appreciated learning more about the political climate and world events of the period, as well as the impressionist movement in general.

The fledgling non-fiction group suffered a set-back this spring when interlibrary loan service across Ontario was abruptly suspended in April. For June, the group is experimenting with a different format. Instead of all group members reading the same book, they will instead read different books on the same topic. The group doesn’t meet over the summer and is exploring options for books for autumn.