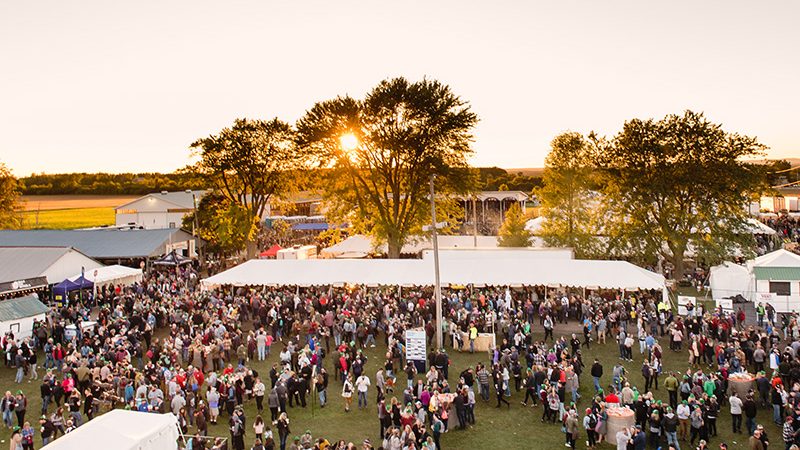 Photo from the 2018 edition of Beau’s Oktoberfest, taken from the top of the ferris wheel. Photo: Jan Amell

Beau’s Oktoberfest has kicked off its 2019 ticket sales today, with an announcement of the musical acts for this year’s festival. Vancouver’s indie rock supergroup The New Pornographers will be headlining the mainstage on Friday September 20, and Juno-award-winning rapper and songwriter Shad will be headlining Saturday September 21. Supporting acts include Jenn Grant, Neon Dreams, Birds of Bellwoods, Caravane, John Jacob Magistery, and What If Elephants. The mainstage will be hosted by Canadianity creators and podcasters Jeremy Taggart and Jonathan Torrens, and will feature daytime entertainment from Canada’s Polka King Walter Ostanek. More than 15 additional bands will entertain on the Black Forest Stage, headlined by two all-female bands: Mobina Galore, and Pale Lips. The musical line-up is once again made up of 100% Canadian acts.

Beau’s Oktoberfest is marking its 11th year in 2019 as the signature fundraising event for Beau’s Brewing Co. It takes place annually at the fairgrounds in Vankleek Hill, Ontario, the hometown of the independent Canadian brewery. Last year’s festival attracted 17,000 attendees over two days, and raised $94,323 for charity and local community groups. Since 2009, the festival has generated $711,212 in funds for good work projects.

This year’s edition of Oktoberfest will once again have all the components for a great time: a vast selection of Bavarian-inspired cuisine from local restaurants, 65 different beers to try (14 brewed by Beau’s and Halcyon), an activities area with keg toss, sausage eating, and other games, a Kinderfest area for kids, and a Beau’s themed midway with prizes. The beer-curious can sign up for “School of Bock” classes to learn more about pairing food with beer, brewing, and all things craft beer. Round-trip bus transportation will once again be available from Montréal, Ottawa, and Cornwall; Ottawa festival-goers can also sign up for a United Way fundraiser bike ride to the festival grounds. Camping passes are available to add on to a ticket purchase.

Tickets for the 2019 Beau’s Oktoberfest are on sale now at www.beausoktoberfest.ca. Weekend passes are $45, single-day tickets $32. Child (18 and under) passes are $5 when accompanied by an adult.

Beau’s Oktoberfest 2018 – By the Numbers