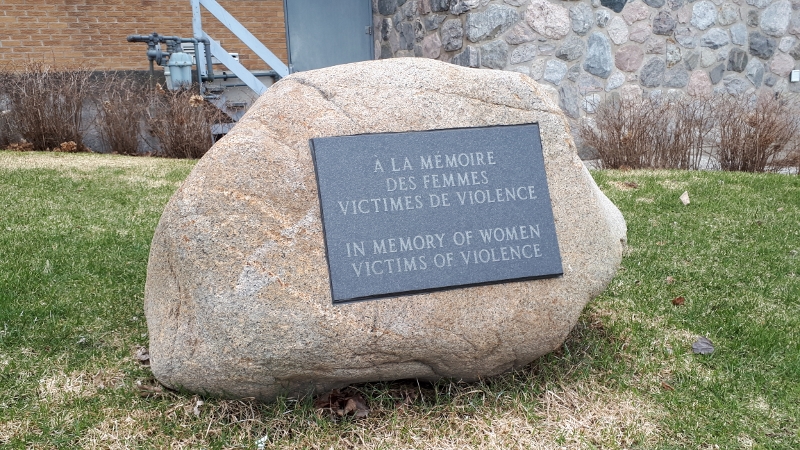 Plaque in memory of women victims of violence in front of the Hawkesbury Town Hall. Photo: James Morgan

The Casselman-based francophone women’s support organization received $235,995 from the federal government in April for their Strengthening Organizational Capacities in Order to Strengthen Women’s Rights program.  The project is intended to better mobilize the community and raise awareness to prevent violence against women and address gender inequality.

The federal funding for Centre Novas-CALACS resulted from a commitment in the 2019 budget by the government to spend $160 million over the next five years on the Women’s Program.

Director-General Anne Jutras said the federal funding will make it possible to better meet the needs of women in the community.

“This will be accomplished by building new connections and partnerships,” said Jutras.

However, the federal funding can only be used for the specific project it was provided for, and not other aspects of programming and operations.

Jutras explained that Centre-Novas-CALACS receives $281,000 each year from the Ontario Ministry of the Attorney General, and that amount is unlikely to increase anytime soon.  The funding amount for 2019 was the same as 2018.

Jutras said they were given an additional one-time only amount of $14,571 from the ministry for 2019, but that will not happen again in 2020.  She said a condition was attached to the one-time amount that the province wants to see proof that more women are making use of the centre’s programs and facilities.

Prevention of sexual assault, gender-based violence, and discrimination is a major part of what Jutras is hoping to focus on.

“We need to do a lot of community development,” she said.

However, prevention is not funded, but interventions are.  The provincial funding is considered victim services programming by the Ministry of the Attorney General.

Centre-Novas-CALACS has four regular employees.  The Director-General and two counsellors are full-time employees and the administrative assistant is part-time.

All salaries, which Jutras said total approximately $190,000, are covered by the $281,000 from the province.  Other operational costs include rent for office space in Casselman, Hawkesbury, and St-Albert.  Utilities, publicity, and promotional material also must be paid for.

Jutras said the one-time provincial funding amounts to less than one day per week for one year for a staff member earning just minimum wage.

Other organizations such as the United Way and Canadian Women’s Foundation do provide varying amounts of funding each year for specific projects of Centre-Novas-CALACS.  Jutras said those two organizations did provide $5,000 to help with the centre’s prevention-based group for young women in 2019.

She added that the unpredictability of finances and the need to be flexible are part of daily work for Centre-Novas-CALACS.